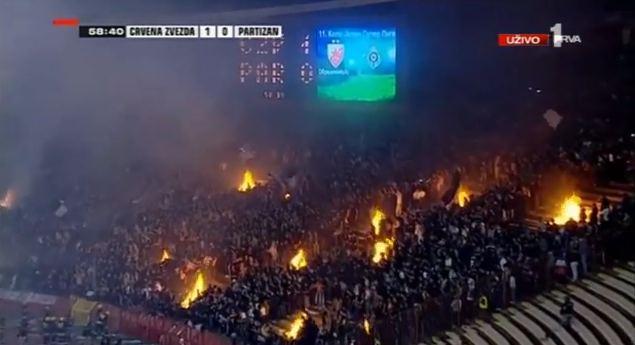 After a recent wave of incidents, Serbian authorities have promised draconian measures against hooligans, but seem unable to effectively tackle the problem

"What a picture of us are we sending to the world?", bitterly said the announcer in the face of the flames rising from the Marakana stadium in Belgrade. It was the evening of November 2nd, when the derby was played between Red Star and Partizan, the two biggest football teams in the city.

Despite the huge deployment of police, the ultras of the two teams had managed to sneak into the stadium incendiary arms, knives, and sticks. Partizan ultras started it, but in a few minutes the stadium was literally on fire. Hundreds of fans gathered around bonfires jumping and singing, and the jets of water cannons seemed to turn on rather than extinguish outbreaks (video). Long minutes passed before the situation returned to normal and the match could continue.

As in many other European cities, in Belgrade skirmishes and animosity between ultras are not uncommon. However, the severity of the incidents of November 2nd has aroused particularly vigorous reactions by the leadership of the State. Deputy premier Aleksandar Vučić promised that "the fight against these criminals will be fierce, and one of the largest-scale ever conducted in the history of the country". However, Vučić quickly added that it will not be a witch hunt, because "the State will not pursue supporters, but criminals and drug dealers".

The links between supporters' organisations and the city's underworld are known. Indeed, almost all ultras leaders have been investigated for offences including drug trafficking and smuggling, illegal possession of firearms, racketeering and extortion, theft and, in some cases, murder. Clashes between thugs are rarely motivated by sports rivalry. As a rule, they are about settling scores between warring factions competing for the control of Belgrade's criminal activities and drug squares.

Vučić's lunge seems therefore to hit the mark. In fact, according to many commentators, the dissonant tone of his statement – initially intransigent, but immediately mitigated – betrays a lack of real political will to tackle the problem. As reminded by Gordana Andrić on BalkanInsight, almost all governments in office since 2000 have formally engaged on this front, but to no avail. Two years ago, the government had also promised to set up special courts and specially trained police forces, but did not follow up on the commitment.

The root of the problem

What has prevented the Serbian government from intervening with the necessary determination for all these years? Again, the answer transpires from the statement of a political leader. This time it is Prime Minister Ivica Dačić, who a few days ago candidly admitted how "we all appear amazed at the existence of mafia groups and criminals, but for years, if not decades, we all have 'courted' those groups, even my party has pursued a benevolent policy towards nationalism and chauvinism, because at that time it was a popular practice to obtain consent".

The root of the problem, then, is the collusion between political structures and supporters' organizations. The strongest bonds are those between nationalist parties and ultras groups who rely on loyal and disciplined members to control the urban area, offering in exchange the guarantee of impunity. The phenomenon, however, is transversal to all political forces. Gordana Andrić writes, "it has been a custom since the time of Milošević for parties to place their emissaries in the governing bodies of clubs and sports associations". Cases of this type are counted in tens. The most striking concerns Red Star and Partizan, whose two vice-presidents are both ministers of the current government as well as members of the Socialist Party. It is, however, news of these days the decision of the Progressive Party, led by Vučić, to withdraw its cadres from all the governing bodies of sports clubs in the country.

In light of such widespread, rooted ties of complicity, it is not surprising that in recent years Serbian authorities have not been able to address the problem with the necessary determination. The situation is further aggravated by the intimidation threatening anyone who tries to investigate these links. The most striking case is that of journalist Brankica Stanković, author of the investigative television program Insajder. Since 2009, when she publicly denounced the complicity between politicians and ultras leaders (here the English transcript of the investigation ), Stanković has lived under police protection for fear of retribution.

The plots among hooliganism, crime, and politics are a serious problem for Serbian society. Political anthropologist Ivan Čolović, an attentive observer of the phenomenon, suggests a sociological reading. In an interview with Kontrapress , Čolović states that the true roots of criminal supporters' associations lie in the "extreme right-wing political ideas which these groups embrace and contribute to propagate" – ideas that do not differ much from those embraced by those who publicly promise to pursue them. Addressing the problem of hooliganism, Čolović says, means "to deal with nationalist ideology, which is widespread and deeply rooted in Serbian society".

That political elites are closely intertwined with the ultras world, reminds the anthropologist, is not news. So said paramilitary leader Arkan in the early 90s, when he took control of Delije, the ultras group of Red Star. Today, continues Čolović, "supporters' organisations are considered a bastion of 'Serbian-ness', Christian orthodoxy, the defence of Kosovo, traditional masculinity, the country, the army, and the family". What should concern us, therefore, are not individual acts of violence, but "organised violence underpinned by ideological reasons, such as the attacks of thugs against the Pride parade".

A systematic and detailed study would probably identify the likely origin of these violent behaviours in social unrest. If it is true, as claimed by Čolović, that "it is an explosion of anger and frustration that occurs in every part of the world where there are so many young people without work and without hope", then you have to believe Ian Traynor, Guardian journalist who in 2010, on the occasion of the riots caused by Serbian fans in Genoa, wrote: "Given the high unemployment rate, the lack of future prospects, 20 years of war, the collapse of the State, NATO bombings, and widespread crime, it's no surprise that the youth of Belgrade misbehaves".