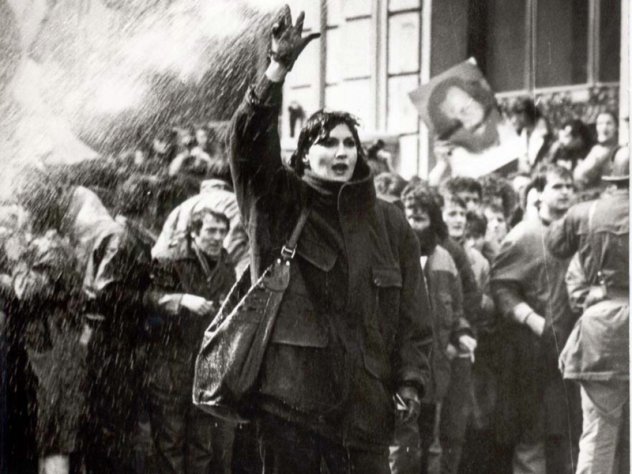 Dragana Milojević, during the 9 March 1991 demonstration

Twenty years ago, in Belgrade, the first huge demonstration against Milošević’s regime. This date is the start of our dossier on the 20 years since the beginning of the war in Yugoslavia. The story of who was still a little girl then but who, for the first time on the 9th of March of 1991, demonstrated for a different Serbia

““I remember it was March,

a totally normal day for many of you,

but it left a trace in my heart”.

When a few weeks ago Luka Zanoni asked me to write a text about my memories of the 9th of March, I accepted without hesitating, happy that I could tell about my numerous battles against the regime of the time. Until now I had not known it would be one of the hardest texts for me to write.

I was 16. I grew up in a Yugoslavian family that refused to believe that war was knocking on our door and that the system, the only one they knew, was crumbling at the speed of light. I cannot even remember my parents voting at the so called first multi-party elections in Serbia. I cannot remember when talks on politics began, in our home, or when conflicts between them and me started.

My parents never forbade me anything, not even when, probably unaware of what I was saying, I asked them to question all they had believed in until then; when for weeks I warned them that we were being threatened by a collective abyss. I would use big words like: authoritarian regime, multi-party system, liberalism, terror, wars, human rights, freedom. I dig into my conscience and I cannot figure out where those words came from and where I heard them for the first time.

I can only remember the shock on their faces when their daughter, still a minor, started her personal political campaign in the Nenadić home. I would “incite” them daily, ask them to change their minds, to follow me. I would overwhelm them with talks about my future, I would tell them that they had to change because of me and I had no clue about what kind of fear they were talking about.

There is one thing I remember clearly, though. I knew of demonstrations set for the 9th of March. At school, those of us that were “politically aware” had divided between sympathizers of the Serbian Renewal Movement (SPO) and its leader, Vuk Drašković, and the Serbian Democratic Party (DS). I was in this group. We would talk about taking part in the demonstration, even though we had no idea of what it was and why it was being organized. There was no one to give us information. The television was controlled by the regime and the little I was able to listen to on Radio B92 was not enough for me to get an idea. I had not told anything to my parents until the 9th of March. They thought we were going to my Grandmother’s place in town, for a while. This is what it sounded like: what I do not see does not concern me.

For days they had whispered to each other, in the corners of our house, thinking I could not hear them, that there would be chaos in the city’s streets and so a young and inexperienced daughter was to be taken away. I did not want to hear about leaving. In the end they accepted to remain in Belgrade, probably not imagining that I would be going out on that 9th of March. They would learn the hard way, my poor parents, that there would no longer be a single demonstration their daughter would not be going to.

Morning of the 9th of March 1991. Mom and Dad are watching TV. The thought of what the reporters of RTB (Radio Television Belgrade) said disgusts me. There is no cure for this, not even after 20 years. The police had been in the streets since early morning. They said demonstrators were the forces of darkness and evil. I am standing in front of my parents and I tell them I am going to the demonstration. I remember the shock. My Mother tries to talk me out of it, even though she knows I will not give in. So she starts crying. And then she threatens me.

My Father is silent, his parent heart crumbles, angry and enraged. I see it, but I understand he is not angry at me, he feels powerless, he knows our world is changing and he does not know how to face it. They do not believe in forbidding. So how can they tell me not to go, now? They dread the thought of big clashes, how can they let me go? They have heard all demonstrators will be recorded and are wondering how they can come with me if they then lose their jobs, with huge harm on the whole family. What is the best choice? My parents are racking their brains. And I ony understand them now.

I go to the demonstration with three classmates. We do not get very far. The police is at every entrance of Republic Square. We watch as they beat people. Demonstrators scream “Serbia is waking up!”. A large group is going towards the city center. The police is on every corner. Demonstrators play chess with the police, hide in the alleys and look for passages. I hear the voice of a friend screaming “Run! They’re coming with the water cannons!”. The bravest demonstrators, incited by the screams of Vuk Drašković, “Ahead, heroes!”, jump on the armored tanks and put flags on them. I am overwhelmed with panic, suddenly petrified. I do not know what to do. My friends drag me on the sidewalk and then home. My first experience as a demonstrator lasts a half hour.

At home, in silence, we watch TV. To this day, I still remember very well the image of a woman standing in front of the water cannon, with her chest proudly thrown out and with three fingers up. I recognize Dragana Milojević, a neighbor who in passing had told me that freedom was soon to come. The evening streets of my city are filled with tanks. I go to bed enraged and scared. For the first time, I am aware that my fight for a different Serbia has begun. With my parents I fought for another whole year, till they joined the opposition as well. I fought for another nine years against the regime, along with hundreds of thousands of other people.

The very next day (10th of March) I am in Terazije, I take part in the “Plush Revolution” organized by the students of the University of Belgrade, called such to underline its peaceful nature Surrounded by people who think like me, I sense the hope. The 9th of March would become a watershed, in my life.

If only I had known how long we would have to wait for another chance, if only I had been a little older, if only I had not gotten scared, if only all those people that were in the streets of Belgrade on that day had not been surprised and shocked, if only they had been more organized, if Vuk Drašković had known how to respond, if they had not asked RTS editors to resign, but Milošević, if Dragoljub Mićunović had not invited DS sympathizers to withdraw because enough blood had already been shed, if I were, if they were, if it were… but I have not, they have not, it is not… that is why we waited until the 5th of October of 2000.

And this is why I cannot seem to find an intelligent conclusion to this story about the 9th of March. I have buried this date, it is hard for me to recall, it makes me nauseous to think about all those years that have been lost, but what hurts me the most is knowing that the failure of the 9th of March demonstration opened the door to wars, killings, bombings and those dark years where we did not exist.