A Question to the Court 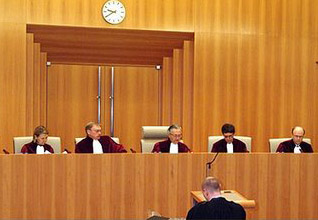 Is Kosovo's independence in accord with international law? This is the question that, subject to prior approval by the UN General Assembly, Serbia decided to address to the International Court of Justice (ICJ), the supreme judicial body of the United Nations

In mid-August, Serbian Interior Minister Vuk Jeremić submitted a draft resolution on Kosovo to the UN General Assembly. The resolution requests the Assembly to solicit a consultative opinion from the ICJ on the legality of Kosovo's declaration of independence.

By submitting the resolution, Serbia has started the official procedure with the UN Assembly General. The Assembly resumes regular work in September.

The resolution presented by Minister Jeremić, according to Tanjug Serbian news agency reads:

"Mindful of the purposes and principles of the United Nations, Bearing in mind its functions and powers under the Charter of the United Nations, Recalling that on 17 February 2008 the Provisional Institutions of Self-Government of Kosovo have declared independence from the Republic of Serbia, Aware that this act has been received with varied reactions of the members of the United Nations as to its compatibility with the existing international legal order, Decides, in accordance with Article 96 of the Charter, to request the International Court of Justice, pursuant to Article 65 of the Court's Statute, to render an advisory opinion on the following question: 'Is the unilateral declaration of independence by the Provisional Institutions of Self-Government of Kosovo in accordance with international law?'

The goal of the initiative is to suspend the process of recognition of Kosovo's independence until the ICJ will have rendered its opinion. In this way, Serbia also hopes to block Kosovo's integration in international institutions.

When explaining the new initiative, Jeremić stated that it was part of the strategy adopted by the Serbian Government, and that it was an item of the action plan whose content has not yet been made public in Serbia.

Jeremić stated that with this move Serbia wants to bring back the issue of Kosovo in the international law arena where, in the words of the Belgrade official, Serbia has better arguments for defending its territorial integrity and sovereignty.

"If the Assembly General decides that the question is addressed by the ICJ, I believe that the effect over the short term will be that the countries that have not recognized Kosovo's independence, which in our view has been illegal, would not do it until the Court will have expressed its opinion", said Jeremić in an interview for B92. "If we reach our objective in New York in September, I think there will be no new recognitions, and from that moment onward Kosovo will not become a member of any important international organization," Jeremić stated. The Minister added that Serbia expects the Court opinion to confirm that Kosovo's independence is contrary to international law, which would bring the parties back to the negotiation table.

Jeremić did underscore that the Court's opinion does not have binding power, but instead a great moral, political, and judicial influence.

The Minister expects a strong opposition to the draft resolution proposed by Serbia, particularly from countries that have already recognized Kosovo's independence. Jeremić added he well knows that those opponents were presently more powerful nations, but that "Serbia is absolutely determined to persist in this initiative and was currently engaged in intensive diplomatic talks with the entire world." The Minister added Serbia will not stop. "We will use all political, judicial, and diplomatic means to defend the sovereignty and territorial integrity of our country."

Serbian analysts believe that if Belgrade would get the support from the General Assembly, it would win a great moral satisfaction. An international law expert, Vladimir Djerić, said on a B92 radio talk show, "Magnification", that it is impossible to predict how states would vote on such a resolution, but that it would definitely be a complicated decision.

"It is not realistic to expect that after the Court's opinion the recognitions of Kosovo's independence would be annulled or that a new process of negotiations would be opened. The opinion of the Court will, however, have a great moral and legal value," emphasised Djerić.

Former Foreign Minister Goran Svilanović believes the draft resolution is a good move. He argues that in this way the Kosovo issue will stop dominating the Serbian political scene, since it will take at least two years to have the opinion of the Court.

Many do not like Serbia's initiative. US officials have already given a warning to Serbia, and French Foreign Minister Bernard Kouchner made it clear this might slow down the country's progress towards European integration. Sonja Licht, president of the Belgrade based Fund for Political Excellence, does not think the resolution could be an obstacle on Serbia's path towards the EU. Licht pointed out that if Serbia continued to respect its international commitments, nobody would question its future as an EU member state. "There would be different interpretations. Some would say the resolution is not good, whereas others would fortunately argue that finally Serbia reaches for legal means, as opposed to disproportionate confrontation, in dealing with a difficult problem," added Licht.

Dusan Lazić from the Forum of International Relations thinks that after a successful diplomatic initiative by Serbia, many states would decide to support the resolution, either bilaterally or unilaterally. As Lazić argues, states would not do this for the sake of Kosovo or solidarity with Serbia, but in order to be able to protect their own interests in the future, and to establish a safeguard mechanism in international law. Lazić adds that the resolution has "more chances" of being approved after the war between Georgia and Russia and the subsequent issue concerning the independence of South Ossetia and Abkhazia.

If Serbia's initiative is accepted by the General Assembly, it would be the first time that the ICJ pronounces itself on a case of secession of a state's territory.

ICJ's proceedings are complex. The Court asks the opinion of the state that makes the motion, in this case Serbia, but also of the other states which support it in the General Assembly. The states which do not support the initiative and which want to be heard by the Court can also take part in the proceedings. The proceedings end with the reading of the consultative opinion in an open session. The opinion is not legally binding and its practical implementation depends on the body, or the organization that has requested it. The major strength of the opinion is the credibility of the Court.

The ICJ was founded in 1946, with a seat at The Hague, and is one of the six most important bodies of the United Nations. The Court hears disputes involving states and, in such cases, pronounces a verdict. Another part of the Court's mandate is to give consultative opinion when asked by a body of the United Nations.

The principles of the Court include objectivity and independence. The judges are not proposed by member states but instead experts from all over the world put forward their nominations and the list of candidates is deposited in the office of the UN Secretary General.