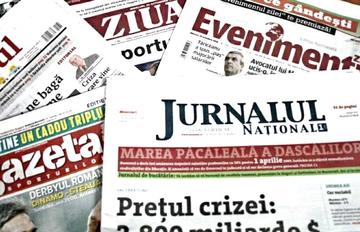 Despite appearing diverse with its hundreds of news outlets, Romania’s media landscape is actually controlled by a handful of magnates. With many of them facing criminal charges, the future of journalism in this EU country becomes even more uncertain

Reports have surfaced over the past months that prosecutors with the National Anticorruption Directorate (DNA) have specifically targeted and brought most media barons in Romania under investigation, sometimes obtaining convictions. This has put their media groups in jeopardy, with Adrian Sarbu’s Mediafax, for one, entering insolvency in 2014 .

The highly influential Sarbu was arrested in February 2015 on charges of tax evasion, embezzlement and money laundering that involved Mediafax. Then, in December 2016, he was indicted for participating in crimes against humanity , in connection with the deadly quashing of protests in June 1990 when he was chief of staff for Romanian Prime Minister Petre Roman.

Meanwhile, Intact Media Group’s Dan Voiculescu was sentenced to 10 years behind bars on money laundering charges. A former senator and the founder of the Romanian Humanist Party (now Conservative Party), Voiculescu had gone on to become one of the richest entrepreneurs in Romania before falling from grace.

The Romanian government seized Intact Media Group in light of Voiculescu’s conviction in 2014. Meanwhile, one of the group’s broadcasters, Antena 3, had been investigating political corruption schemes reaching into the government’s inner circle – and accused DNA Chief Prosecutor Laura Kovesi of being involved in a related cover-up.

As entrepreneurs are brought down by criminal charges, so are high-ranking politicians in the far-reaching DNA raids. The media industry in Romania concurrently loses its quality and financial sustainability , along with the public’s trust; although it is still considered the lifeline of information in the country, and different camps keep fighting for control of it.

In a March 2015 opinion piece in the New York Times , the US organisation Democracy Institute dubbed this “a legal reign of terror” – including going after tycoons who had fallen out with Romania’s political leadership or whose publications had been critical of the government. But Razvan Martin, programme coordinator with Romanian-based ActiveWatch, a media monitoring organisation, tells the ECPMF that the DNA’s actions are justified and long overdue: “The DNA are prosecuting media tycoons because the media industry is extremely corrupt. Most owners are businessmen or politicians who use media for their personal interests.”

It is remarkable that the justice [system] is finally bringing to light the corrupt mechanisms of media funding and functioning. Such practices were known among media professionals, but unknown to the public, as few insiders dared to openly speak about them.”

Martin also says that “corrupt media owners or managers” targeted by the DNA are striking back by “running campaigns against the justice system, portraying themselves as victims .” ActiveWatch has been following the corruption situation in Romanian media for more than 15 years, and publishes reports on the state of press freedom annually.

The latest of such reports stresses that the politicisation of Romanian media was particularly apparent in the 2014-15 election cycle. Broadcasts expressed “open partisanship” and spread “disinformation”, while media owners used outlets to put pressure on the justice system. At the same time, the justice system was exposing “corrupt connections” of many media owners (and also some journalists) with business and political interests, and even organised crime.

A separate Centre for Media Transparency (CMT) report , entitled The men who bit the (watch) dogs, explains that the “somewhat chaotic scenery” regarding the media in Romania reflects overall patterns of post-communist development. Politics, business, journalism and justice are entangled in complex and even symbiotic ways: Leaders in each of the fields – many with a communist past and beneficiaries from the transition into capitalism – move from one field to another while keeping their hands in the multiple different pots.

Journalists in Romania, says the CMT report, find themselves caught between their role as “advocates of justice and anti-corruption and at times protectors of secrets” – between hard-hitting, award-winning journalism and “sophisticated” propaganda.

To further complicate matters, the global economic recession has hit Romanian media hard. Journalists are losing their livelihoods, the industry is mired in debt, and funding sources buoying it are obscure and sometimes illegal, as recent prosecution has indicated.

“To be sure, the financially unsustainable and legally grey financing structures have started to crumble together with their corresponding tycoons,” the editor and publisher of the media platform EurActiv Romania wrote in a September 2015 editorial , also mentioning the CMT report’s findings.

They noted that while the EU Charter of Fundamental Rights enshrines media freedom, it “is focused almost entirely on government interference”. The actual situation is “far more nuanced,” however. Constraints on media in Romania and elsewhere in the EU are often linked to ownership concentration and structures:

“These are obstacles such as self-censorship, conflict of interests and editorial tampering, which produce troubling consequences with respect to the protection afforded to pluralism, free competition and democratic culture.”

EurActiv Romania describes the Romanian landscape as one marked by an advertising industry not large enough to support the high number of news outlets, while the news outlets are concentrated into the hands of a few owners with deeply intertwined and specific economic and political affiliations. This makes the viability of independent media very low.

If they do not agree with interference in their work due to their bosses’ wanting to protect political personages and interests – as has been the case recently at a newspaper and news portal – Romanian journalists tend to lose their jobs. Then, they have practically nowhere to turn to where they can report freely in their country.

The Media Pluralism Monitor 2015, which gauges threats to media freedom and pluralism, gave Romania the highest possible risk score (100 percent) in terms of “concentration of cross-media ownership”, and 81 percent risk when it comes to “politicisation of control over media outlets”.

The report says there is no “specific law” in Romania requiring that a media company’s ownership be disclosed, nor limitations on ownership for print and Internet media. The recession has made the concentration of media outlets in the market even worse. The report says that “threats come from the use of media outlets as political tools, the frequent interference of owners in the editorial content, both in the private sector and in PSM [public service media], with journalists in a precarious situation economically, as well as in terms of professional and personal integrity.” Read the full report .

The article was originally published by the European Centre for Press and Media Freedom (ECPMF).