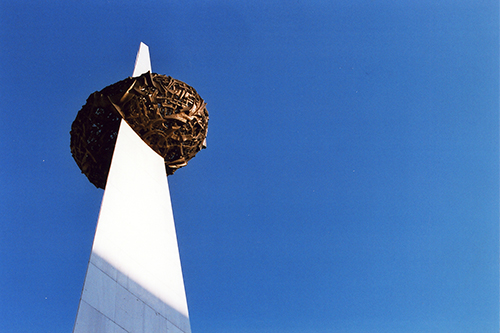 Memorial of Rebirth - by F.Martino

A "moment of glory and great courage" but also "too many black holes and no shared interpretation of the events". Twenty years later, says professor Mirela Murgescu, the Romanian revolution of December 1989, which could have become the "founding myth" of the new Romanian democracy, still remains extremely controversial. An interview

For Europe, the symbolism of the events of 1989 and the fall of the Berlin Wall in November of that year is widely shared. In Romania, however, events arrived with a delay of one month in December with what was afterwards called the "Romanian Revolution of 1989." Where were you at that time? What are your personal recollections of those events?

Back then I worked at the library of the Academy in Bucharest. What I remember most from those days was the cold, both outside and in our flat, the terrible economic situation, and the lack of basic necessities, even food. At the time, the regime was trying to keep us as isolated as possible. There was strict control of channels of information. At night, my family and I, like many others, would secretly listen to Radio Free Europe or to Voice of America depending on which could be heard better in spite of communist electronic interferences. It was the only way to find out what was happening in Europe. It was from the radio that we heard about the events in Timişoara, of the protests and the clashes which started on 16 December. From that moment on, everything happened very fast. I remember that on 22 December, the day Ceauşescu fled, I went out on the streets with my family, here in Bucharest. In the evening, when we were already celebrating among family, the shooting and fights started. The University library was destroyed by fire. My colleagues and I decided to guard our library; the women, including myself, by day, the men by night.

The events which marked the "Romanian Revolution" remain very controversial. The political establishment has not managed to find a shared interpretation of what happened. Some say it was a "real revolution" and others say that what happened was a "palace coup" inside the regime. How do historians look at it?

Historians are divided too and even nowadays, there is no shared or common interpretation of what happened. Unfortunately, what could become the "founding myth" of the new Romanian democracy still remains extremely controversial. There are still too many "black holes" in the reconstruction of the events in December 1989. From my point of view, at least in the beginning, the fact that after a long period of silence and suffering people went out into the streets, first in Timişoara and then in Bucharest, to challenge the repressive regime, was one of the "moments of glory' of the Romanian people; a moment of great courage.

Then however, events become less clear with the shootouts, the dead, and the mysterious "terrorists." Recently, a publicly financed institute has been created with the purpose of studying the events of December 1989. Unfortunately, this institute, which is chaired by former president Ion Iliescu, one of the major actors in the "revolution", has stifled debate rather than promoted it by trying to impose a single version of the truth.

Which particular historic moments of that time are now presented in school textbooks, and in what way?

The major events such as the fall of the regime, the execution of Ceauşescu and the first steps of the new democracy are presented to the students but, in general, the texts which describe the December 1989 events do this in a cold and neutral way. Recent events and recent history are approached in a narrative way which attempts to avoid ethical comments as much as possible

With twenty years of distance, how does history reinterpret the person of Nicolae Causescu and the communist regime?

At the official level, a "Final Report" has been published by a Presidential Commission for the Study of the Communist Dictatorship in Romania appointed by president Traian Basescu. This report, which has been endorsed by the president of Romania and officially presented in a session of the Parliament, has generated disagreements and controversy in Romania. I think that the facts concerning Ceauşescu's personal regime are still too recent in order to be studied impartially, "in cold blood" so to speak. However, this has started to become possible for events from the 1960s or from the so-called "Stalinist period" after the war. The memories of Ceauşescu are still very recent in Romania and they are thus divergent: there are those who demonize him, but there are also those who speak of him in a positive way.

Is there any strategy for systemic management of the collective memories of 1989 such as public ceremonies, building of monuments or museums?

There are public celebrations each year in December which first take place in Timişoara where the beginning of the protests against the regime on December 16 is commemorated. In Bucharest, scientific sessions combine with special sessions of the Parliament and with commemorations dedicated to the victims of the bloodshed. Many monuments have been built over the years. In Bucharest, the most famous one was inaugurated in 2005 in front of what used to be the Central Committee of the Romanian Communist Party. It's an obelisk, but it is quite controversial, both for its aesthetic qualities, which are less than obvious for a large number of people, as well as for having been designed and installed under the political auspices of Iliescu.

Would it be useful to have a museum of the communist regime and of the events of December 1989? How should it be organized?

I think that a museum would be a useful tool for understanding and discussing this phase of our past. I personally think that the most suitable place for such a museum would be the old building of the Central Committee of the Romanian Communist Party, which today hosts the Ministry of Interior. It is the building from which Ceauşescu used to make his public speeches, including his famous last speech, given on 21 December, the day that marked the beginning of the end of his regime. A museum of this type could be organized by combining artifacts and items of that period with modern technology such as, for example, a multimedia section. I think that the "Check Point Charlie" or the "DDR-Museum" in Berlin could serve as models; small, but very effective as didactic tools.

What is the attitude of the new generations to those events? What are the major sources of information on 1989 for young people?

I conducted a survey in 2006 and asked almost 400 high school students what they knew about the 1989 events, both in Europe and in Romania. The results showed that the youths' knowledge of that period was quite fragmentary and imprecise. There is an interesting finding concerning the sources of information on '1989: 41.6% of the pupils indicated the family as the most important source of information while 25.9% cited TV as the primary source and 23.7% cited school.

In Eastern Europe, including Romania, there is the phenomenon of nostalgia for the communist times. Is this a generational thing?

In Romania, it is difficult to talk about nostalgia for the communist regime as a generational phenomenon. This is because many people from the generations which lived under communism do not feel any longing for this historic period. Paradoxically however, there is a form of "nostalgia for the regime" felt by young people who do not have any memory of it whatsoever. This is, in a sense, nostalgia which is "transferred" primarily by the stories told by their parents and older relatives and which flourishes on the grounds of dissatisfaction with the present situation.

Do you think that Europe should create a shared memory of the events of 1989?

This is a very delicate subject. Above all, we should clarify what we mean by "shared memory." Very often, "shared memory" implies the construction of myths and, subsequently, heroes, and is therefore somehow artificial and superficial. I think a better option would be to aim at building up a "minimum shared knowledge" of those events at a European level. On the basis of such a basic knowledge, Europeans should be able to overcome existing confusions and to assess the significance of the events for themselves, for their families and communities, as well as for the historic evolution of European institutions which influence our existence.