The government vs. the court 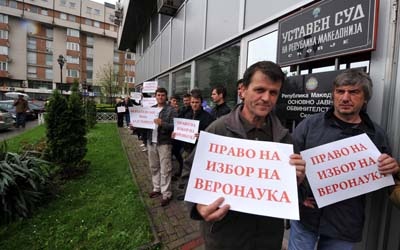 A few days before Easter, the Macedonian constitutional court cancelled a law enacted by the VMRO-DPMNE led government introducing optional religious education in public schools. This act marked the beginning of the fiercest dispute between the executive and highest judiciary institution

As of 21 April, the Macedonian judiciary faces the most serious threat to its independence. The threat comes from the government.

A few days before Easter, the court overturned the legislation introducing optional religious education in public schools. Religious education first started last September at the beginning of the school year, under a law enacted by Prime Minister Nikola Gruevski and his government led by the VMRO DPMNE party. The law allowed primary school pupils to choose between a "history of religions" class or religious education. According to the press, approximately 65 percent of the pupils chose religious education. The pro-secular political bloc confronted the pro-religious bloc over the law. A smaller Liberal Democratic Party (LDP) filed suit against the law; the constitutional court announced a decision, accidentally or not, just before Easter.

After a few days of quiet during the long Easter weekend, VMRO stepped forth with strong, unprecedented criticism of the court decision.

VMRO spokesperson Ilija Dimovski accused the court of making a political decision sponsored by outgoing president Branko Crvenkovski. Dimovski said it was good to finally suspend the unwritten rule to not comment on the court's decisions. He suggested that the judges on the court are "close" to the opposition social democrats (SDSM) of Crvenkovski.

VMRO has been "unhappy' with the constitutional court for quite some time. Recently the court annulled the legislation for two other favourite projects of the VMRO government: the so-called "baby boom" bill, which offered generous social benefits to families with a third and fourth child, but only in areas of low population growth and the "patriotic cash registers" that printed receipts indicating purchases of Macedonian origin (the idea was to promote local products).

The VMRO leadership has been lately grumbling about the court. Perhaps Prime Minister Gruevski, and VMRO party president tried to co-opt the court by announcing, only days before the baby-boom decision, construction of a new Supreme Court building. Alas, civility ended, when the VMRO party leadership decided to lash out at court.

Several pro-religious citizen's groups and the religious education instructors, who would now likely end up unemployed, protested together before the court. Bigger protests are expected in the future. They argue that the court's decision hurts the interest of both the pupils and the parents who opted for religious education for their children. Asked what could they expect because the court's rulings are final, their press representative said, "We believe in God, so we believe in miracles."

The constitutional court also issued a press statement on 21 April. Without singling out anyone in particular, the court objected to the criticism by different political parties and restated that its decisions are definitive and executive. The court's press release also noted that the suspension of religious education in public schools results from the constitutional principle of separation between the state and religious communities, but that the different faiths are completely free to organize their own private religious schools.

Some experts tried to make the same point over recent days. Professor Ljubomir Cuculovski, who teaches philosophy of religion at the faculty of philosophy, said that "suspension of religious education in public schools is not its suspension all together." The pro-secular Cuculovski suggested that the religious communities could do their teaching in churches, monasteries, summer camps, and so forth, but that the public realm should be separate from religion.

Some protesters before the court were more blunt. Their banners read, "Stop atheist dictatorship!"

They are, however, not the only ones accusing of repression. The opposition SDSM and LDP parties condemned VMRO's attack on the constitutional court.

"VMRO has been trying to control the judiciary for quite some time now," said Emilijan Stankovic from the SDSM party, "I would not be surprised if they also try to do it with the constitutional court."

Outgoing president Crvenkovski made the strongest criticism. He said that (his arch-enemy) Prime Minister Gruevski, after having managed to gain control over parliament, the local authorities, and the new president, now also wants to control the constitutional court. Anyway you put it, "this is totalitarianism," said Crvenkovski.

The EU Ambassador Ervan Fuere was the only foreign diplomat with immediate comments on the ruling. With careful language, he reprimanded VMRO's attack on the constitutional court: "Those who do this should think what they have to gain from it except a ruined authority of this important institution."

Some legal experts were outraged that political parties and other groups in society, such as religious communities, would attack the constitutional court.