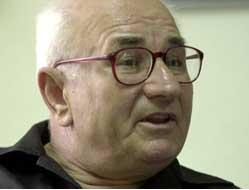 Stamen Filipov, often referred to as the " legal terminator", is an elderly man living in Skopje, Macedonia. He has chosen an unusual hobby for his quiet days of retirement: he guards the constitution

Democracy rests on active citizenship that constantly monitors the government. An active citizen is an essential requirement for a free society. The centre of democracy is the citizen: sometimes - a single citizen. His name is Stamen Filipov.

Often referred to as the "legal terminator", Stamen Filipov is an elderly man living in Skopje, Macedonia, who has chosen an unusual hobby for his quiet days of retirement. He guards the constitution.

The Macedonian constitution allows everybody, including all legal and natural persons, to challenge laws before the Constitutional Court. All legislation passed by Parliament, and decisions made by the government must be in accord with the basic principles enshrined in the constitution. Everybody who thinks a certain piece of legislation, or a part of it, does not meet this standard, can say "wait a minute..." Stamen Filipov has said this many times: close to 500 times since Macedonia's independence in 1991.

To date the Constitutional Court has accepted around 120 of Mr. Filipov's petitions. Some 30 more are currently under review.

A joke goes around the Parliament every time a sensitive piece of legislation is up for a vote: "Why doesn't someone call Uncle Stamen?" Better to ask first, than be sorry later.

A few years back, the government wanted to restrict paid maternity leave only to women who had been employed for more than 6 months before giving birth. Because of limited resources, the government was trying to spare some cash. Uncle Stamen said, "This is not right, it is discrimination." The Constitutional Court agreed.

Uncle Stamen did not enrol in law school until he was 36 years old. He completed his studies in parallel to his regular job in the military, first the old Yugoslavian and then since 1991, the Macedonian army. He challenged his first law back in the 1970s, when he wanted to help a friend. At the time, the legislation concerning living entitlements of army employees entitled only military officers, but not the civilians working for the army, to army-subsidized housing. This did not seem right to Uncle Stamen. He filed a petition and in not more than six months, the Federal Yugoslavian Court agreed. The provision was repealed. His friend could apply for a flat.

Uncle Stamen monitors all laws, but he specializes more closely in fields such as labour, internal affairs, or army regulation. He sometimes files as many as a one or two petitions each week.

For some motions, the Constitutional Court must convene a public hearing and Uncle Stamen must appear. In the past, he says, before the beginning of the hearing, the president of the court would stop by and say hello. Then, at some point, he stopped doing it. Uncle Stamen was giving him too much to do.

Filipov emphasises that he receives no benefit of any kind, material or political, from what he does.

"My only interest is to help the rule of law," has says.

The only "fee" he ever has received for his services was 1,500 denars (25 Euros) for advice to a client who wanted to file a petition.

Yet, as his fame spreads, his services will likely be in higher demand. Earlier this year, Mr. Vladimir Milcin, the well known public intellectual and director of the Open Society Institute (an international private foundation supporting human rights), hired Uncle Stamen to fight the recent law on lustration. The law, which has been a source of controversy, seeks to ban from public office the collaborators (police informers) of the secret services in the communist era. Most Eastern European countries passed similar legislation. Mr. Milcin said, the law, as designed, would only serve to discredit political opponents. Uncle Stamen noted that the law might have had some sense if passed back in 1991, but 17 years later, it is completely unproductive. Both Mr. Milcin and Uncle Stamen want the law completely rescinded. The case will be heard by the court soon.

Many people and institutions would prefer if Uncle Stamen just played chess in the park, as do other pensioners. Alas, he is not planning to quit anytime soon.

"I monitor all legislation being passed. When I notice something, I file a petition. My motive, as a citizen and a lawyer, is to support the rule of law." Uncle Stamen underscores that he is not a member of any political party.

Filipov dismisses the claims that the system is dysfunctional; thus, so many of his petitions are accepted. The system has a sound basis, says he, but it needs constant work. In his view, the worst aspect of the system is that the competent institutions do not always execute the Constitutional Court decisions. "This means death to the rule of law" says he.

In the past, he had disputed the right of the police to hold people for 24 hours without charges. The court agreed and annulled the provision from the law on internal affairs, which had permitted it. Still, the police found a way around the court decision and sometimes still holds people without charges.

Seen as an eccentric in the past, Uncle Stamen has over the years received some of the recognition he deserves.

A civil rights NGO has published a book with all of his petitions. The title is symbolic: The Constitutionalist.

He was nominated by a group of citizens for the national award "13 November". He did not get it. "I am not surprised", he says "many see me as nuisance."

Nuisance or not, when the government contemplates a project, they are probably asking themselves, "What will the citizen say to this?"