The End of a Bad Privatization 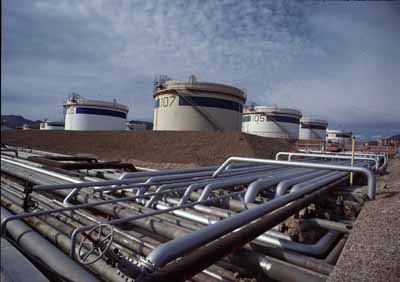 Macedonia has to pay USD 53 million to Hellenic Petroleum, the Greek company which owns the only oil refinery in the country, "Okta", near Kumanovo, said a Court of Arbitration in Paris last month. And this is likely the tip of an iceberg, say experts

Macedonia has to pay USD 53 million to Hellenic Petroleum, the Greek company which owns the only oil refinery in the country, "Okta", near Kumanovo, said a Court of Arbitration in Paris last month.

Several years after the Greek company sued the country for failing to meet its contractual responsibilities under a sales agreement from 1999, the international mediation tribunal reached a verdict - USD 53 million plus interest for the past 8 years, which brings the total somewhere above USD 70 million. And this is likely the tip of an iceberg, say experts.

To say the verdict came as a shock in Skopje, would be an understatement. It hit more like an earthquake. It is yet to see how many politicians will end up under the mudslide. But to say it came as a surprise would be a total denial. But as the saying goes, the power of denial is never to be underestimated.

Macedonia sold its refinery in 1999, in the first year of the mandate of former VMRO Prime Minister Ljubco Georgievski, now a poet, proponent of territorial divisions in the Balkans, and a Bulgarian citizen. It was the year of the NATO bombing of Serbia (which destroyed Serbian refineries) and the subsequent "opening" of the Kosovo market. The price was USD 32 million and the government praised it as the most lucrative privatization deal ever. The Greeks committed to further investment in the country; Macedonia gave them quite a few lofty special privileges: it committed to procure from Okta 500.000 tons of heating oil annually, or roughly twice the country's spending capacity; gave the refinery the right to be the exclusive oil importer into the country, and a lot more. In the words of the former International Crisis Group (ICG) rep in Macedonia, only an idiot or a very corrupt politician could sign such a detrimental deal.

Even the 32 million were not real. Insiders say the different discounts inserted into the clauses of the sale brought down the real price to a lot less.

"The government sold Okta for some 8-9 million USD, that is to say, it sold one of its biggest assets for a ridiculously low price", says former Finance Minister Nikola Popovski.

In 2002 government changed and new social democrat Prime Minister Branko Crvenkovski cancelled the deal. The cancellation followed a ruling by the Constitutional Court however, which rescinded parts of the agreement. Hellenic Petroleum subsequently sued, and the verdict arrived last month.

Who has to pick up the bill now? That is the question.

More fuel on the fire was added by professor Ljubomir Frckoski, political analyst and opinion maker. He said there were hidden annexes to contract the government didn't want to make public. He said the contract had several annexes, and one of the critical ones was signed by Mr. Gruevski, who at that time served as minister of economy and subsequently of finance.

"There are seven annexes to the core contract on Okta and the government must make them public", stated Mr. Frckoski, "I know of two of them because I served as a consultant to the Constitutional Court, and I know of the remaining five from my sources, from people who had got the original contract from the Greeks, after they couldn't get it from their own government. The verdict of the Paris court is based on the annexes. It is a criminal act to hide them.

"Prime Minister Gruevski has never signed an annex to the Okta contract", reacted the government press service promptly. The first minister also added that he was not present at the government meetings when the deal was approved.

"Eleven years I have been feeling on my back the people of SDSM (social democrats), their affiliates, criminal associates, and alike. If they accused me tomorrow of having assassinated president Kennedy, I wouldn't be surprised", said Mr. Gruevski.

"Mr. Gruevski cannot escape responsibility", said Ms. Radmila Shekerinska, the leader of the social democrats, "instead of criticizing the deal or trying to oppose it, he applauded at the signing ceremony. You can see that from the photos".

The opposition produced a couple of letters to the Greek owners of Okta, signed by Mr. Gruevski as a minister of finance in 1999, encouraging them not to respect the prior exclusive rights on oil imports of another Greek company, Mamidakis Oil, and asserting that the Macedonian government would bear the responsibility, that is, possible liability arising from such action. When the government made the deal with Okta, it again simply defaulted on the previous deal it had with Mamidakis Oil - is there a Macedonian politician who understands the significance of the word contract? - who also sued, and his share in the total of the damages Macedonia has to pay is around USD 14 million. According to the opposition, the grounds for that are the letters from Mr. Gruevski informing Okta that the government would "take care" of that.

Both the creator of the deal, Mr. Georgievski, and his heir at the leadership of VMRO, Mr. Gruevski, use the same argument in their defense. The social democrats were in power for four years (2002-2006); why didn't they press charges if there was anything criminal in the deal?
In 2003 the Anti-Corruption Commission started an investigation into the case and pressed charges. The Public Prosecutor opened a case but it stayed completely idle till the very end of the social democrats' term in 2006.

The case was not "kept in a drawer" for political reasons, says former Public Prosecutor, Aleksandar Prcevski. He denies that the case might have been buried because of possible consequences to current President Crvenkovski, who also cancelled the deal when he came in office as prime minister in 2002. Mr. Prcevski says the prosecution couldn't launch proceedings because it never got the information and evidence it requested from other institutions, such as the police.

And so it goes. The damages Macedonia has to pay as of 2007 are USD 70 million. Experts say that since Okta's exclusivities ran for a 20 year period, or 2019, the Greeks would seek further damages. The total, in the words of the social democrats' leader Ms. Shekerinska, could reach USD 650 million. And yet, it is nobody's fault. Mr. Georgievski says the deal was good, it was the social democrats who ruined it; SDSM says (but also many others) the deal was extremely harmful to the country, and so forth.

What is likely the most defeating conclusion, is the lightness and lack of accountability with which politicians make and break. Without regard for anyone. Still, a voter needs to believe that somebody does pay after all. Except the voter that is.