The Death of Macedonian Village 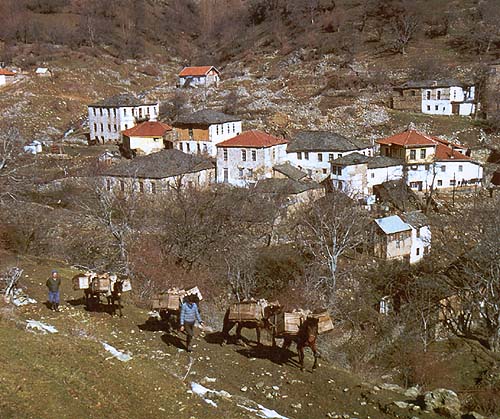 Silence, desolation, houses in decay, lifelessness. This is a common sight from the Macedonian countryside. As odd as it may seem in a country as small in territory as Macedonia, its rural parts are dying out.It has started more than 50 years ago. But its consequences are more and more visible with time

Silence, desolation, houses in decay, lifelessness. This is a common sight from the Macedonian countryside. As odd as it may seem in a country as small in territory as Macedonia, its rural parts are dying out. People are leaving the villages and going to the cities. Mostly to the capital city. That is, those who do not migrate abroad. It is not a new process. It has started more than 50 years ago. But its consequences are more and more visible with time. And by today - the numbers are alarming.

The are 458 villages in Macedonia today which have less than 50 residents, say the latest data from the State Statistical Office. They are at a heightened risk of being completely depopulated. This number comprises almost 1/3 of all the communities in the country. For comparison, back in 1953, there were only 20 villages in Macedonia which had less than 50 inhabitants. According to a UNDP report from 2001, several years ago only, this number was - 360. This means, that just over a few years the number has increased by around a 100 more villages.

The State Statistical Office also reports a total of 147 villages being completely emptied as of present. The number was 121, according to the UNDP report, back in 2001.

Further, in this group of 458 villages, there are over a 100 which have less than 10 residents. The number can perhaps be valid for statistical calculations, but it is clear that these villages are already empty.

Elderly people over the age of 64 represent high portion of the population in such villages.

Villages in the hilly, mountainous and remote areas are the ones most affected by depopulation. Villages in the central part of Macedonia, around the city of Veles are strongly affected by this negative trend. The municipality of Stip in the eastern part of the country holds the record of 22 villages with a 1-digit or low 2-digit number of residents.

There is a simple word that combines all the diverse reasons - rural poverty. Small income from agriculture, but more importantly - lack of basic services such as health, education, social and child protection are the facets of poverty in the rural countryside. As an example, there are still villages in Macedonia which do not have access to electricity. Let alone, roads, or sewages.

Rural population suffers from education and literacy deficit which in addition has a strong gender aspect - 75% of the illiterate are women; 58% of the adults without completed elementary education lives in rural areas.

Employment in agriculture rose over the past decade, which was common across transition countries as it absorbed the workers laid off during the failed privatizations, however farming income stayed low.

Today's rural social problems do not arise solely from the economic transition but are a result of the inherited levels of economic and social development from past years.

According to experts, it was the process of forced industrialization back in the 50s that left detrimental consequences on the villages in Macedonia, when farmers were forced to leave the land and go to the cities and become proletarians. But from then on, a lot of it accounted for on natural process of migration, and on the incapability of authorities to create and implement a viable rural preservation and development strategy.

Macedonia has a Bureau for Underdeveloped Areas which is essentially the country's instrument of rural development, although the government is "selling" it to the EU as a tool for regional development instead. The Bureau is a successor of the rural development mechanism which existed in former Yugoslavia, both at federal and the level of individual republics, and it essentially implements a strategy which is wrapped around the goal of assisting the rural areas in Macedonia.

The Bureau can make grants for economic infrastructure (roads, water and power supply systems, sewages, etc.), as well as grants for non-economic one (schools, libraries, cultural centers, etc.), contribute to investment in commercial projects, award bonuses for creation of jobs, give research grants, provide or organize training, cover social and health benefits, and even help with school buses for children. It is fair to say that the Bureau acts on operational objectives which have been well developed over the years. The problem is that it doesn't have the funding to make substantial contribution. Although the legislation sets the Bureau's budget at 1% of GDP, in reality, the funding the body gets is between 10-30% of that amount, and sometimes even quite less.

According to professor Nikola Panov from the Institute of Geography in Skopje, there is a clear correlation between the depopulation of the Macedonian village and the negative population growth the country has been experiencing in the last decade.

"We move in the completely wrong direction and do not have the vaguest idea how to help the Macedonian village" says professor Panov, "The land is being abandoned and at the same time we keep talking that agriculture is the backbone of our economy."

Professor Panov advocates a strategy for the revival of the Macedonian countryside. He says some of the villages need to go back to working the land, but the key for others would be the revival of craftsmanship or alternative forms of tourism. He also argues that many elderly from the Macedonian diaspora would consider returning and spending their days of pension in the native land, only if the villages could offer good conditions for return.

"There are around 1 million people in the world of Macedonian descent. I am convinced that many of them, especially pensioners would return to spend the rest of their lives in the beauty of the Macedonian countryside, if proper conditions created", says professor Panov. He offers for comparison the experience of Slovenia whose countryside is the selected destination of many pensioners from other EU countries, on account of good environment and lower prices.

That could be a strategy to explore in a mid to a long term. But before that, and this is clear at the very surface, without going into much detail, Macedonia needs to do something for its rural countryside immediately. It has the mechanism and the policy already. It needs to provide the funding. This much is clear.