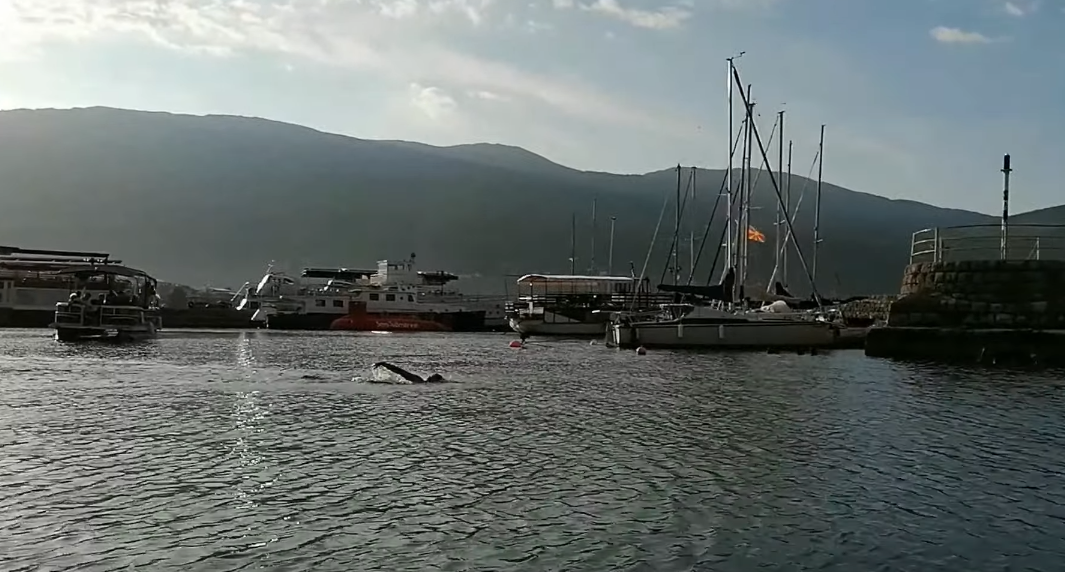 Swimming for dozens of kilometres without using his legs, a sixteen-year-old Macedonian boy is teaching not to give up in the face of difficulties and inspiring the entire country

At 16, Marko Pejcinovski is already known throughout North Macedonia. Born in Ohrid in 2006, despite a handicap in his left leg and several years of difficulty in walking and running, he successfully swims for kilometres in Lake Ohrid.

Marko is an open water marathon swimmer who swims to inspire people and prove that anything is possible; so we read in his Facebook profile presentation, followed by many all over Macedonia. The Macedonian public got to know him four years ago, when he was only 12 and for the first time he swam 25 kilometres across Lake Ohrid, from the monastery of Sveti Naum to the city of Ohrid.

Marko started swimming in long marathons due to a major change in his life in 2016, when at the age of 10 he faced a bone infarction in his left leg. This condition is known as Perthes disease, is caused by necrosis of part of the hip, and causes Marko to have trouble walking and running. All this happened in the period when Marko had football as his main occupation and interest. Since then he has decided to devote himself to another sport: swimming. Due to his leg problems, he swims using only his arms. And since that limits his speed, he decided to focus on the solo swim marathon.

In interviews with local media, he highlights how now, more than a sport, swimming is a source of happiness for him.

"I like to swim, I like the independence I have when I swim. I see swimming as one of the joys of my life. I have decided to go long distances, not being able to swim with my legs. Other people who swim short distances are much faster than me and I can't compete with them, so I decided to go for solo marathons", says Marko, who studies at a vocational high school in Ohrid.

After achieving his first great feat at the age of 12, swimming for 25 km, he has never stopped and every summer he sets off again to conquer Lake Ohrid. This year he managed to do ten swimming marathons on the lake – four in July, three in June, and three in August – for a total of 250 kilometres.

All ten crossings had different starting points and final destinations in most of the tourist spots around the lake. The first route was from Radozda to Ohrid, over 14 kilometres. The last and longest on August 28 was a 64-kilometre route on the Ohrid – Sveti Naum – Ohrid route, nearly 22 hours in the lake.

With his continuous exploits, it is as if Marko wanted to eliminate the word “impossible”. With each new announcement, people on social media wonder how such feats can be accomplished. Marko often talks about his achievements and desires on social networks: "I want to show that we can all be successful, regardless of the obstacles that stand in our way. No matter how difficult the situation we find ourselves in, there is always a light. I have a message for everyone: as we know, we have only one life. Let's make the most of it, live it to its fullest potential, become the protagonists of our history and never give up".

Marko dedicates a large part of his swimming marathons to people who face great battles to motivate them to overcome their problems. He has dedicated several crossings to children with rare diseases. On those occasions, T-shirts with Marko's motto "Never Give Up" were made, and the funds raised from their sale go to associations that deal with rare childhood diseases. At the age of 15 Marko swam the Ohrid-St. Naum-Ohrid, later dedicating this crossing to his mother, who died last year after a serious illness.

Marko encourages people to follow his example and to be persevering, in his messages he also stresses the need to pay more attention to their mental health. He says that people often lack will and desire, and this hinders many from doing anything in life.

"I think that today more than ever there are people struggling with depression, anxiety, etc. and I believe that this problem is not talked about enough. I have experienced it and I know how serious it is. That is why I believe the time has come to pay more attention to mental health", said Marko.

An image of the student was also found at the "Future of Europe" exhibition, part of the "European Youth Goals", with the portraits of 12 young people who excel in their activities, made by the Europe House Skopje. So far, two presidents of the country have received him: ex-president Gjorgje Ivanov after his first undertaking, and current president Stevo Pendarovski last year.