Macedonia, the 'battlefield' of democracy 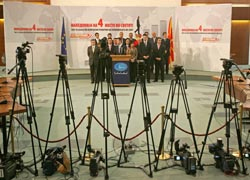 A woman MP was threatened by death, a journalist was battered by police, and parliament had its first fist fight. That is the outcome of the last few days of democracy in Macedonia.

A woman MP was threatened by death, a journalist was battered by police, and parliament had its first fist fight. That is the outcome of the last few days of democracy in Macedonia.

On 25 September, while debating a controversial draft bill, which aims to give guaranteed seats to minority communities in parliament, Macedonian MPs finally had their first fight since establishment of democratic pluralism. From this perspective, it is difficult to explain how parliament has actually managed to avoid such a thing over the last 15 years.

Macedonia is not the only country where MPs go physical on each other. Yet, things are not as benign as they may seem.

While heading towards his seat after having finished his speech, Mr. Abduladi Vejseli from Party for Democratic Prosperity (PDP), the third by size Albanian party, got a hit in the back by Mr. Sadula Duraku, MP of the opposition Democratic Union of Integration (DUI) of Mr. Ali Ahmeti. A few more MPs rushed in, security quickly intervened and Chairman Ljubisha Georgievski promptly ordered recess.

It is but another outburst in the already well known antagonism between the two major Albanian political blocks, opposition DUI and government partner Democratic Party of the Albanians (DPA) of Menduh Taci, and its smaller partner, PDP. They have entered fights before, and have suspected each other of throwing bombs at each other's party offices, or even killing each other's activists. Only this time the violence took place in parliament.

However, that was just the beginning. As MPs sprawled through the corridors, with tension running high, incidents continued.

A parliament security guard was reportedly knocked on the floor and beaten; several groups of MPs from DPA and DUI exchanged provocations.

A1 TV channel reporter Lirim Dulovi was slapped by one of DUI's officials while standing in one of the corridors. Footage shows how Mr. Bekir Iseni from the notorious village of Tanusevci (where the 2001 conflict began), member of the presidency of DUI, actually slaps Mr. Dulovi as he passes him by.

Immediately after the break of the plenary session, Mr. Menduh Taci, DPA's president, reportedly joined a smaller coordination meeting that was going on and threatened Ms. Teuta Arifi, vice president of DUI.
"Mr. Taci addressed me offensively saying that we must sit in until the end of the parliament session, or we would all be liquidated, and that I am first on the list", stated at her press conference Ms. Arifi a day later. "While exiting the meeting room, I was physically attacked by the security stepped in", added she.

DPA quickly denied. "I was present and Ms. Arifi was not hurt. She was only called upon to return to the meeting instead of running away as they always do", said Mr. Besim Dogani from DPA.

Ms. Arifi called upon the police to protect her from the death threats made by Mr. Taci. She appealed, as to a woman, to Ms. Silvana Boneva from opponent VMRO, who was also present, to say the truth of what happened.

Apparently, while the jumble in parliament was going on, DUI called their body guards who showed up in front of parliament, allegedly armed. A few of them clashed with the police and were detained, some ran away, and some arms were apprehended. DUI first said their people had come in for their protection, but later changed the story and said people had gathered spontaneously.

Altogether, a night to remember. Macedonia has already seen what can develop from a few shots being fired.

What happened is a shameful betrayal of the democratic process, reacted the US Embassy in Skopje.

"This must not repeat" said Ms.Cristina Gallach, spokesperson for Mr. Javier Solana.

Ms. Krisztina Nagy, Mr, Olli Rehn's spokesperson called on Macedonian authorities to take necessary steps, and the EU Ambassador to the country, Mr. Ervan Fuere called the OSCE to step into the investigation of what happened.

"I am very concerned that journalists, who are only doing their job, are also victims in these incidents" said Mr. Fuere.

The turmoil continued the next day at a pay toll on the road from Skopje to Tetovo. According to media reports police stopped the car of MP Sadula Duraku, but encountered a quick reaction by the residents of the nearby village of Zelino who gathered to protest. A crew of Alsat TV channel arrived trying to shoot the events at which point police went after the cameraman Igor Ljubovcevski and started beating him.

"Few of the special police squad Alfa who were there jumped on our cameraman, took the tape from him, broke the camera, and started beating him. First they beat him on the road, then put him inside the pay toll booth and continued there", stated Mr. Muhamed Zekiri, Alsat editor in chief.

Mr. Ljubovcevski was immediately transferred to a hospital. He has two broken ribs.
The Ministry of Interior, at least, was prompt to react. The cops were suspended and investigation was opened.

"I will not allow this case to damage the good cooperation the ministry has with the media" stated minister Gordana Jankulovska.

"We concluded that they used unnecessary force and started the procedure", she concluded.

The next day the ministry pressed criminal charges against one of the policemen, Mr. Ramadan Imeri.

The media retorted. They banded together in front of common threat. Yesterday the government called a press conference to share good news of a recent World Bank ranking of Macedonia as a top performer in transforming the business climate. As prime minister Nikola Gruevski said the first sentence, all the reporters in the room left. Ministers stood there stunned.

The association of journalists also called upon colleagues to boycott DUI's activities. DUI's yesterday's protest in Skopje, against the parliament incidents the other day, stayed unreported.

"We share your feelings" said prime minister Gruevski later, "I want to tell you that we took all the possible measures".

Several politicians commented that the incidents in parliament were a sham organized by opposition SDSM and DUI to defame the government ahead of important assessments expected by NATO and the EU.

That is rather unlikely. What happened was more like an expression of who we are, MPs have immunity, and as long as they do not threaten women and bring firearms in front of parliament, they can organize their boxing matches in private. They could also think of turning into a sport and charging tickets, as long as they do not do it in their working hours.

And as for tough-guy cops who beat journalists - they belong in jail.