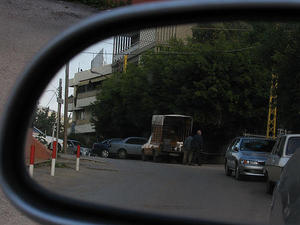 Macedonia's law on the lustration of public figures compromised by the communist regime has come late. As elsewhere in Eastern Europe it has been used for high-level acts of political revenge. Now it's the Albanian 'hero', and leader of the DUI, Ali Ahmenti's turn

Soon after its long delayed start (almost two decades since the beginning of transition), lustration in Macedonia began to show its potentially destructive power. A mere few months since the lustration commission commenced work, the process is wreaking havoc on the political scene.

Most of it, however, comes from outside the institutions responsible for pursuing the “purification”. It also appears to come from outside the country. The lustration roads seem to lead to Belgrade.

The mess started in mid-October when Shpend Ljushi, a professor from Tetovo, found three former secret police files in his yard. He consigned them to the lustration commission, as a concerned citizen. The files contained data on three collaborators of the former Yugoslavian federal security police, notoriously known as UDBA.

The collaborators had code names such as “Uncle”, “Drim” (river in western Macedonia), “Strelec” (archer, sharpshooter), but the information they contained pointed to senior officials of the biggest Albanian party, the Democratic Union for Integration (DUI), and the junior partner in the government. DUI is also the political successor of the National Liberation Army (NLA), which started the ethnic-based, armed conflict in 2001. DUI’s leader, Ali Ahmeti, is the founder of NLA.

Even though the commission said it could not verify the files, since they came from non-Macedonian sources and were not original documents, the explosive event seriously compromised DUI’s position in the Albanian public opinion. Information in the files accused the code-named collaborators of serious wrongdoings against the Albanian people.

DUI dismissed the files as forgery and claimed a conspiracy led by Menduh Taci, the head of its archenemy, the Democratic Party of the Albanians (DPA). Heated debate over the files’ authenticity embroiled the public in the following days.

Then, an even bigger bomb exploded. In a front-page article, a major daily reported of another file on a collaborator code-named “Ibar” (river in Serbia). Born in a small community in western Macedonia, the secret collaborator was described in the file as highly reliable UDBA collaborator for almost two decades.

The public recognized in the file nothing less than DUI’s leader and NLA founder, the hero of Albanians, Ali Ahmeti. The shock was staggering. DUI quickly denounced the file as a forgery and said it was primarily evidence of the state of mind of whoever had fabricated it. In DUI’s view, its archrival DPA was behind it.

The file contained information on the alleged sexual inclinations of the collaborator cited also as grounds for his recruitment by the secret service, involvement in UDBA actions against the Albanian illegal immigration, his false passport issued by UDBA, even his complaints about occasional delays with payments from UDBA. It was just too much to believe. Yet, it seemed convincing.

The question that emerged was: if Ali Ahmeti started the war in Macedonia, and he worked for Belgrade, what was Belgrade’s role in its southern neighbour’s ethnic conflict? In addition, it became clear that lustration in Macedonia would be a futile exercise if critical files were stored in Belgrade.

UDBA was a federal Yugoslav service; when Yugoslavia collapsed, in all likelihood most of its files remained in Serbia. An entire debate commenced over Belgrade’s possible role in lustration in Macedonia. Same argued Belgrade should and must collaborate in order to demonstrate a democratic will to deal with the past, including the time of Milosevic’s rule over the 1990s.

Macedonian president Gjorgji Ivanov travelled for talks with his Serbian counterpart, Boris Tadic, about the issue. Tadic reportedly was willing to help. Others said, insisting on Belgrade’s help with such delicate matters would make Macedonia vulnerable. One would never know which file, with potentially devastating political effect, to expect next. Former secret service agents argued that expecting foreign services to share such data was at the very least naive.

The debate went on and on over the authenticity of the files. In a few days, the exhaustion from the inability to find the truth for certain, made it seem somewhat tangible that the whole thing could be a hoax, a set-up.

Then, there was an aftershock. A controversial and very influential journalist, Vasko Eftov, interviewed in his show “In the Centre” a retired high-ranking UDBA agent, Bozidar Spasic, in Belgrade. In Eftov’s show, Spasic was presented as a former key UDBA operative in charge of Albanian immigration.

The interview was almost surreal. Spasic said he would never give out any names but in-between words – former spies seem masters of the trade of subtle allusions – he seemed to corroborate a lot of the information from the files circulating in Macedonian public. It all seemed possible again. Spasic seemed frank and at times wary in front of Eftov’s more direct questions.

In his view, it was unfortunate that people who had done great service to their country (Yugoslavia) were now in trouble because of, well, their service to their country. The abundant detail of UDBA operations he provided in the interview seemed obviously valid. In later contacts with Macedonian media, he said he would be willing to testify before the lustration commission.

The files were back in focus. The main dilemma remained: are they authentic? If they were not, who had interest in fabricating them? Could they be forgeries? According to some former secret service agents who became frequent guests on TV, the files seemed too realistic to be faked. According to others, they easily were.

Some argued the verification of authenticity could easily be done, because in their view, a trail always remained. The federal UDBA, their argument was, relied on agents in the republics, so there must have been a trail or memory at some point, even if perhaps no longer, because, they said, massive disposals of secret files had been done on several occasions in the last decades in Macedonia.Still, their position was that authentication was possible.

Others argued that even if those files had an element of truth, confirmation of what was true and false would be impossible. Others again, disputed the files with the argument that files were kept on suspects, not on collaborators. And, so forth.

Real or not, where did they come from? The main assumption was – Belgrade. Spasic argued in his interview with Eftov that in the 1990s, when the federal UDBA no longer existed, its Serbian successor had taken the Albanian files to its base in Pristina.

In Spasic’s view, the least substantiated one during the interview, they must have emerged from Pristina. Macedonian experts quickly refuted the possibility that Serbs would have just left the files when withdrawing from Kosovo after the 1999 war.

Unless, others argued, they left them on purpose: that is, left fabricated files to cause confusion, a standard method of secret services. Other former agents said they have been hearing for some time the rumour in intelligence circles that files are “on sale” in Belgrade for some 50,000 Euros each. And, so forth.

The only thing that seems to be certain at this point is that probably nothing will ever be known for certain. Uncertainty and doubt, it appears, are inseparable from any attempt to seek truth in spy files.

This, however, does not reduce the damage. On the contrary: it aggravates the damage because there will be those would never be able to prove they were innocent. For the time being, the biggest casualty of this process in Macedonia has been DUI.

There are no guarantees that they would be the last to suffer damage.