Macedonia: Six Killed in Police Raid in around Tetovo 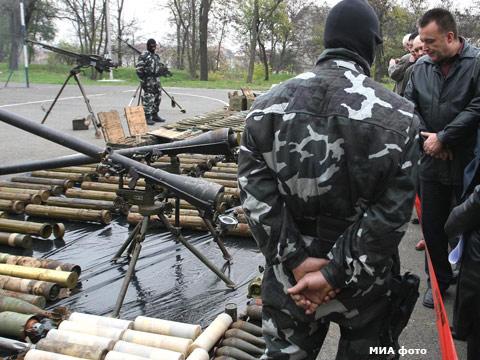 Six men were killed and 13 were arrested in action of the special forces of Macedonian police in the village of Brodec, Tetovo region, on the morning of 7 November. The operation, code name "Mountain Storm", which took place in the early morning hours, was completely unexpected

Six men were killed and 13 were arrested in action of the special forces of Macedonian police in the village of Brodec, Tetovo region, on the morning of 7 November.

The operation, code name "Mountain Storm" which took place in the early morning hours was completely unexpected. It has been preceded however by recurrent media reports of movements of armed groups in the region, over the past months.

The presumed leader of the group, Lirim Jakupi known as "Nazi", either managed to escape or was not in the village at all at the time of the operation. He is at present still at large. Several others are also on the run.

Mr. Jakupi fled from "Dubrava" prison in Kosovo several months ago in one of what seemed a series of coordinated prison breaks in both Macedonia and the UN administered province.

All of the killed and arrested have, according to police sources, long criminal records and many of them are wanted internationally. Among them, Fatos Aliu (killed), wanted for the murder of an MP in Albania; Ramadan Shiti (killed), wanted for killing of a taxi driver in Macedonia. He also fled from prison several years back.

Twelve of the 13 arrested are from the village of Brodec and one is from Tetovo. The group had dug trenches around the village and was prepared for organized military resistance.

The police seized huge amount of weapons during the operation. According to experts, the weapons sufficed for an entire battalion of 600 men, and it was enough for occupying an entire city. Probably that was also the intention of the group, according to some.

"This is the largest amount of weapons we have seized so far", stated Ms. Gordana Jankulovska, Minister of Interior, "there are different pieces of artillery, grenades, launchers,...we also seized training manuals, which is an indicator that the group had been preparing."

Two houses in Brodec burned to the ground as a result of the clash, and the village mosque, which was used as a combat post by some of the group, was damaged. Blood trail was visible in the village the day after, when reporters were allowed to enter. Several cars have been smashed by police transporters in the neighboring village of Shipkovica, as they headed to Brodec. Shipkovica was the headquarters of the military command of Ali Ahmeti's NLA during the 2001 conflict in Macedonia.

The police pressed terrorism charges against all 13 detained and several other suspected involved. Some of the detained are in hospital, few of them with serious injuries sustained during the exchange of fire.

The reactions to the event were overall refrained and largely supportive of the police operation.

"The operation was professionally done and it aimed at enforcing the law on our entire territory", stated Prime Minister Nikola Gruevski.

"The action was coordinated with KFOR and the Kosovo police and was aimed at criminal groups which transferred from Kosovo with the intention of provoking tensions. Instead they created tension in the Albanian homes in the region", stated the Democratic Party of the Albanians (DPA), which partners in the government.

Opposition Democratic Union for Integration (DUI) of Ali Ahmeti expressed concern over the excessive use of force in the operation and condemned the arrests made in Skopje which preceded the Brodec raid. According to the police, the arrested in Skopje, some of them former NLA fighters, were logistical support to the Brodec group.

In the view of the opposition social democrats from the Macedonian block, the action was necessary.

"It confirmed though that it was not a group of smugglers as some people were claiming in parliament, but one with a very clear political agenda, and which represented a clear threat to Macedonian security", stated Ms. Radmila Shekerinska, the leader of the social democrats.

Two Macedonian policemen had been killed in the last several months in the border areas with Kosovo. The last incident, just two weeks ago, in which a 24 year old policeman got killed and two others injured, after they were fired at during regular patrolling, was described by the authorities as an act of smugglers.

Official Tirana was quick to condemn any attempt to destabilize Macedonia, but it also cautioned Macedonian authorities against using force on civilian population. Condemnations of the criminal groups came also from some of the political parties in Kosovo.

"We were informed of the operation and what impressed us was that it was executed by multi-ethnic police forces, which we find to be very important", said Ms. Victoria Nuland, US Ambassador to NATO, who happened to be visiting Macedonia in the same period.

Enlargement Commissioner Olli Rehn said that according to Brussels the event was not related to the Kosovo process.

"I do hope no one will use this as an excuse to cause instability in the region", Mr. Rehn was reported saying.

Police heightened security in southern Serbia in the region of Presevo, Medvedja and Bujanovac, with largely Albanian population.

According to many in the Albanian camp, increased tension can only hurt the prospects for Kosovo.

Gafur Adili, leader of the Albanian National Army (ANA) denied any connection with the group of Mr. Jakupi and said that Macedonia was the last place where fighting was needed.

The local residents are instrumentalized for political purposes. DPA says they were harassed by the armed group; DUI says the opposite. Some of them are simply confused.

"Everybody comes, makes some army. I don't know who they are, how are they called", said an older Brodec resident to the reporters.
According to security experts, the group did not have a political platform.

"Clearly those were trained people, with experience from the previous conflicts, and who given the impending resolution of the regional situation, could offer their services for hire to whomever willing to pay", assesses professor Biljana Vankovska, security expert.

Opposition DUI asked Macedonian parliament yesterday to hold a session on the police operation. The motion was denied with large majority.