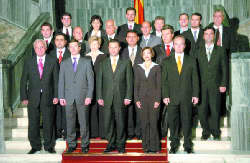 "Greater economic growth, investment, de-politicization and professionalism of the public administration, reduction of bureaucracy, and uncompromised fight against corruption", are the promises of the new Macedonian government to its citizens.

"Greater economic growth, investment, de-politicization and professionalism of the public administration, reduction of bureaucracy, and uncompromised fight against corruption", are the promises of the new Macedonian government to its citizens.

After a day and a half of session, the newly elected Parliament approved the government of the now new Prime Minister Mr. Nikola Gruevski, on Sunday, 27 August.

Mr. Gruevski promised an honest and responsible government which will manage the public resources efficiently.

The government has 21 members from 6 political parties.

Parliament voted the government with 68 votes "Yes", 22 votes "Against" and no abstaining votes.

The MPs of DUI of Ali Ahmeti and the Party for Democratic Prosperity of the Albanians did not take part in the Parliament session. Angered for not having entered the government despite the fact that they won the majority of the Albanian vote, they do not recognize legitimacy to the new government and continue with their protests.

"We are ready", said Prime Minister Gruevski during his opening remarks before Parliament. He said he was confident in his team, but also put in a word of warning that there is always the possibility for changes if confidence was compromised. "Let us embark on a new time and new challenge", called he upon his party colleagues.

The Parliament session was long and, as tradition and political culture would have it, with confrontation and occasional impropriety. Former Prime Minister Vlado Buckovski promised honest opposition, but he also tried to lend advice and counsel to his successor, and part criticize his action already.

"You will have an opposition which will tell you things directly. We will not work behind your backs", said Mr. Buckovski, leader of the Social Democrats.

For his part, Mr. Gruevski thanked the previous government for its work.

Mr. Buckovski criticized some of his successor's choices for ministers, such as Mr. Mihajlo Manevski, Minister of Justice, and former president of the anti-corruption commission.

Mr. Gruevski retorted that "had Macedonia's development depended on good speakers, we would be doing fine, but unfortunately it was not so".

Mr. Gruevski is stepping forth with a bold promise of a 6-8% of economic growth over the next 4 years, and an investment to reach 25% of GDP by 2010. He promises to reconstruct public expenditure and to significantly reduce unproductive budget outflows. He illustrates that by stating that the new government will spend zero on cars or furniture in the next period.

He also promises an aggressive campaign for attraction of foreign investment. His plan is to hire some 25-50 of the most well known global consultancies to help in this endeavor. If it is to judge from early signals, Mr. Gruevski is quite inclined to do things the "international way". Immediately after the electoral victory, his party launched the idea of having a foreigner for Public Prosecutor (the top job for dealing with crime). The rationale is that a foreigner would be more effective in dealing with the widespread corruption. The idea was found to be controversial and it was criticized by authorities in the legal community and political opponents. The least to say is that is unconventional.

The new opposition remarked that the Prime Minister places too much importance onto the economy and minimizes the ethnic relations which are the core of the country's stability.

"There won't be foreign investment if we face a new Kondovo" said Mr. Buckovski referring to the security crisis in the village at the outskirts of Skopje last year.

Mr. Gruevski has the image of an economic expert and workaholic. He was the major (and perhaps only) reform force in the government of Ljubco Georgievski from 1998-2002, and the person who pushed through large scale reforms, such as the introduction of the VAT (value added tax), the denationalization, the reform of the financial system, etc.

In its very first meeting yesterday, the government reduced the VAT from 18 to 5 % for the farming mechanization and related resources. A decision which was gratefully welcomed by the farmers in the country.

The government maintains the course of its predecessor in the realm of international integrations of the country.

"NATO and the EU" are our common goals", says the new Foreign Minister, Mr. Antonio Milosevski. However he also announced more active care for the Macedonian minorities abroad. A statement which may worry some of the neighbors.

"We have three goals" says in a more rhetoric fashion the new Minister of Defense, Mr. Lazar Elenovski, "NATO, NATO, and NATO".

Interior Minister, Ms. Gordana Jankulovska, states as her priority the new legislation on the police.

Vice Prime Minister Imer Selmani of DPA, promises full implementation of the Ohrid Framework Agreement, "The former government didn't have the courage to enact some of the needed reforms", says he.

The new Prime Minister is welcomed by empty corridors in the government building, no Internet in his office, and erased computers, as a typical handover of government goes in Macedonia.

The entire cabinet of some 60 persons has left with his predecessor; Mr. Buckovski, which is also typical of the country. Spoils based administration regularly gets in-dept reshuffle after government change.

He will yet have to usher in his own team. He brings in his former secretary from the Ministry of Finance, Ms. Lena Samardjieva. "There will be more protocol, but not much will be different", says Ms. Samardjieva, adding that she is already used to Mr. Gruevski's management style.

A new period is ahead for the country. Everybody is eager to see what it will be like. There is no confusion about the priorities. People want economic change. They want jobs. Time will show whether Mr. Gruevski can deliver them.