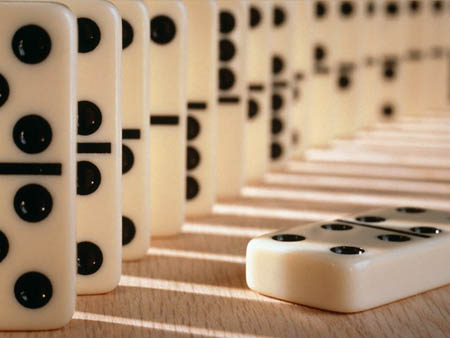 Financial markets in the Balkans are cracking under the pressure from the global financial crisis. Tuesday (October 7) was a bad day for the Macedonian stock market. Its index, the MBI 10, plunged by almost 8%. The crisis seems to be only now arriving in the region

Financial markets in the Balkans are cracking under the pressure from the global financial crisis. Tuesday (October 7) was a bad day for the Macedonian stock market when its index, the MBI 10, plunged by almost 8%. Stock exchanges in the region reacted similarly. The worst decline was Serbia stock market's index, which fell by almost 10%.

The experts agree that psychological reasons caused the fall, but this does not seem to reassure many investors. Share prices have declined for all the strongest companies in Macedonia; despite their executives' emphasis on their companies' profitability.

After peaking in the middle of 2007, the Macedonian Stock Exchange (MSE) has been falling and reached its lowest point on October 7. Undoubtedly, political factors caused most of the decline. The MSE index tumbled in April 2008, due to the large political blow from the Greek veto of Macedonia's NATO application for membership. At that time, the MBI 10 plunged 8%, similar to the fall of October 7. The two other bigger declines over the past year were also related to political events.

Until last week, experts hoped Macedonia would be left unharmed by the global financial turmoil. As the crisis unfolded in the US, Finance Minister Trajko Slavevski stated the country should not be affected because of its low level of integration into the global financial system. He hoped that the Macedonian economy could even benefit from the crisis.

Still, the possible domino effects could not be completely excluded. "This is more a result of the psychological moments than the real economy. However, our financial market is not completely isolated from global trends. We cannot afford to ignore what is going on," said Ms. Marina Nakeva Kavrakova, president of the Commission of Securities.

Executives say their businesses are working well. "Our results for the first nine months of the year are excellent. They are better than the results from the previous year. Yet, because of the indirect consequences of the global financial crisis, our stock has been continuously falling," said Mr. Zivko Mukaetov, general manager of Alkaloid, a pharmaceutical giant and one of Macedonia's most successful companies.

"Psychological factors cause this decline," says Mr. Dimce Lazarevski, portfolio-manager in Ilirika Fund Management, one of the investment funds present on the MSE. "There is a belief that the US bailout plan of USD 700 billion would not be enough to cure the economy. The crisis has already moved to Europe, and from there it is also starting to affect us here."

According to stockbrokers, the fall is also due to the withdrawal of the foreign investors and the domino effect. The US has withdrawn its investments from Europe; in turn, the European investors, in order to retain the confidence of their clients, have chosen to secure necessary capital by selling their investments in the southeast European markets.

Slovenian funds are the major investors on the Balkan stock exchanges. They are now selling their stocks in the region in order to raise fresh money to cover their obligations elsewhere, and this is pushing down the capital markets in the Balkans. Some stock exchange professionals argue that the Slovenian funds still profit with the sales, because at the time of purchase the stock was cheaper.

Brokers advise the stockowners to refrain from emotional reactions, not to rush into a decision to sell, and to keep themselves well informed. Many agree the stocks are currently very undervalued. "These prices are ridiculous," says an MSE operator.

Psychological or not, the crisis is becoming real. The pullout of foreign investors further erodes confidence. The effects will not only be felt on the stock exchange, say the experts. Financial markets overall will suffer.

"Access to capital will become more difficult," says Mr. Gjorgi Jancevski, general manager of Tutunska Banka, one of the largest banks in Macedonia, "In response to the global crisis, banks will become more careful, and money will become more expensive. The time of easy loans is over." In his view, Macedonian banks will raise interest rates by the end of the year.

The National Bank has been closely observing bank lending over the past months. The impression has been that when pursuing bigger profits Macedonian banks have been running lax lending policies, which might increase the number of bad loans. Global events on capital markets now greatly aggravate this situation.

"If a domestic bank uses foreign loans, it will have to take measures to secure itself," says National Bank governor Petar Gosev. He also summoned the managers of Macedonia's biggest banks for an urgent meeting to inquire about the security of the public's bank savings. The banks declared that savings are secure. Reportedly, they kept in well-rated foreign commercial banks not so affected by the crisis, as opposed to investment banks.

Currently, there is not much panic in Macedonia, outside the stock exchange. However, if the security of the ordinary person's savings becomes endangered, then the calm would disappear. The experience from the former Yugoslavia suggests that lost confidence in the financial system is extremely difficult to restore. The astronomical inflation in the last years of Yugoslavia caused Macedonian citizens to prefer to calculate everything in the German mark and then later in Euro even if the national denar has been stable since independence. Confidence in banks has only gradually been returning over the past years, because of the vivid memory of the thousands who lost their savings in the banks of the former Yugoslavia. Erosion of trust could force the Macedonian citizen to go back to the previous informal modes of saving and doing business and that would be bad both for people and the economy.

All agree that the global crisis is strongly affecting the foreign financial flows into the region. "Financial difficulties could arise due to lack of foreign investment, similar to the beginning of the 1980s in the former Yugoslavia," says professor Vladimir Gligorov from the Vienna Institute of International Economic, "In that case, it would be difficult to maintain political and social stability in the region."

The crisis seems to be only just arriving in the region. For the moment, there is no need for panic. Yet, it might still be too early to say how far the crisis will spread.