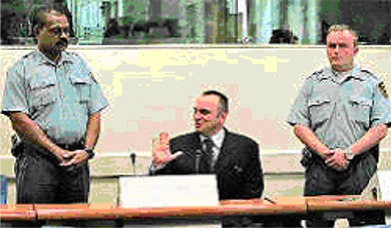 Monday, 16 April 2007 the trial against Macedonia's former Interior Minister from the time of the ethnic conflict in 2001, Ljube Boskovski, started at The Hague Criminal Tribunal. Together with him accused is also Johan Tarculovski, a police commander of the special police forces

Monday, 16 April 2007 the trial against Macedonia's former Interior Minister from the time of the ethnic conflict in 2001, Mr. Ljube Boskovski, started at The Hague Criminal Tribunal. Together with him accused is also Mr. Johan Tarculovski, a police commander of the special police forces.

Both men are charged over their involvement in an event from 12 August 2001, when during a police force operation, 7 Albanians were killed, 14 houses burned, and over 100 residents of the village of Ljuboten near Skopje were battered and harassed.

Mr. Tarculovski is charged for having personally commanded the operation, whereas Ms. Boskovski is charged under the provision of "command responsibility", for having known or being able to know about the events, but for not acting to prevent them or to afterwards punish the perpetrators. The charges include murder, cruel treatment, and wanton destruction.

Prosecutor Joana Motoika gave the frame of the Ljuboten event. She said it followed an incident when a Macedonian army vehicle hit a landmine set by the Albanian insurgents, during which 8 Macedonian soldiers died; the army shelled Ljuboten over the next two days, and on the morning of the third day, on 12 August, the police forces of Mr. Boskovski entered the village.

The Hague Prosecution, in its opening statement from 16 April announced abundant evidence; documents, statements, interview material, and TV recordings, that place Mr. Boskovski at the scene of the crime, and which prove that he had full knowledge of the events.

According to the Prosecutor in the case, Mr. Daniel Saxon, the former Interior Minister was in Ljuboten during the operation. Mr. Saxon supported the charge by playing a video recording. He stated that witnesses would testify that on 12 August Mr. Boskovski met with the policeman who took part in the operation, and with Mr. Tarculovski, and that the same evening he met with other participants in the criminal operation".

In the words of one of Mr. Boskovki's lawyers, Mr. Genel Metro, "during the opening statement of the prosecution there were no personal charges against Mr. Boskovski. The arguments were basically focused on the fact that he had failed in his capacity as a Minister.

According to Mr. Metro, "in cases of command responsibility you have to prove three things; that the accused was in command of the people who had committed the crime, that is to say, that he was able to control them; second, you need to prove that the accused knew of the crime; and third, that he didn't do what was his duty in such a case".

In order to prove jurisdiction, the prosecution must provide evidence that the event took place during an armed conflict. It did this by explaining the scale of the conflict from 2001: houses and objects worth more than 150 million USD were destroyed; the Macedonian economy suffered losses estimated to 500 million euro, said the prosecution.
Immediately after the first day, the trial was postponed for early May, at request by the defence which asked for more time to study evidence which, according to them, the prosecution had failed to share in time.

The trial should hear the testimonies of some 96 witnesses; many of them Ljuboten residents, but also members of the special police forces. The prosecution will try to prove that there were no Albanian insurgents in the village and that the attack was directed only at civilians. The issue of live testimonies was one of the topics in the preparation to the trial. Originally the prosecution had a problem to convince Ljuboten villagers to testify and offered only written testimonies. The defence insisted on being able to cross-examine the witnesses. As late as December, only a few live testimonies were secured. Ms. Carla Del Ponte had complained about this to the Macedonian authorities several times.

The defendants have been in custody since March 2005. Mr. Boskovski asked to defend himself from freedom twice, but was rejected. The Tribunal felt he could influence witnesses, but also that he could be a cause for political tensions. It also felt that Macedonian authorities did not have the capacity to prevent his possible attempt to escape. In September 2006 the new Prime Minister Nikola Gruevski met with Ms. Del Ponte to discuss the issue but nothing changed.

Although the media in the country provide continuous coverage of developments at The Hague, the start of the trial did not cause much political stir. Yet, Mr. Boskovski received some public encouragement from his supporters.

The Macedonian Orthodox Church stood behind him.

"All those who deem they have the right to judge, should never overlook justice. They should not forget when they just unfairly, they also judge themselves", stated chief priest Stefan.

The president of the association of support to Boskovski, Mr. Goran Mitevski says that "Ljube and Johan are in The Hague because they defended the country".

"I do not expect a fair trial. This is a political institution made by the great forces for their own political interests", said police general Goran Stojkov, commander of the special police unit "Lions" formed during the conflict.

Mr. Stojkov, a controversial figure himself, was one of the principal accused in the high profile case of "Rastanski lozja", which charged Macedonian intelligence and police structures with collusion in staging the killing of 7 Pakistani immigrants in order to "demonstrate the country's commitment to the West in the fight against terrorism". Mr. Boskovski's name, as a Minister at the time, was brought up in relations to the charges, as the person who ordered the operation. In a politically super charged trial in Skopje, the defendants, including Mr. Stojkov, were acquitted, but the case is yet not over.

The beginning of the trial triggered a reaction by the Macedonian Government concerning the alleged use of the term "Slav majority which speaks Macedonian", during the first day of the proceedings. The Government spokesman Mr. Ivica Bocevski stated it would get the transcripts from the proceedings and pledge protest if doubts of this confirmed.

The most dramatic moment from the opening day of the trial was a recoding which shows the killing of one resident of Ljuboten, which caused silence in the audience behind the bullet proof glass. It shows two Ljuboten civilians running away. After a series of shots, one of them falls down.