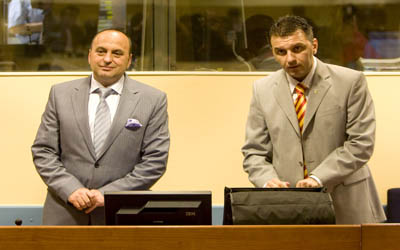 On July 10, after a year in session, the ICTY at The Hague pronounced its verdict in the case of the two indictees from Macedonia. Former Interior Minister Ljube Boskovski was acquitted. Police commander Jovan Tarculovski was sentenced to 12 years

On July 10, after a year in session, the ICTY at The Hague pronounced its verdict in the case of the two indictees from Macedonia. Former Interior Minister Ljube Boskovski was acquitted. Police commander Jovan Tarculovski was sentenced to 12 years.

Mr., Boskovski and Mr. Tarculovski are the only officials from Macedonia to have been indicted by the Court dealing with the war crimes in former Yugoslavia. They were both charged in connection with the case known as "Ljuboten".

On 12 August 2001 a special police unit under the command of Mr. Tarculovski had engaged in a raid in the Albanian village of Ljuboten, north of the capital Skopje. Seven villagers had been killed, 14 houses burned, and tens of others residents reportedly harassed in police stations around Skopje. According to the charges, the victims were innocent civilians, and the destroyed houses were not military targets.

The trial started in April of 2007. The accused had been in detention at The Hague since 2005. Mr. Tarculovski was arrested in Skopje. Mr. Boskovski was handed to The Hague by Croatian authorities. He fled Macedonia back in May 2004 faced with other charges, and sought refuge in Croatia whose citizenship he also holds. He was arrested there and spent time in detention in Croatia before being sent to The Hague.

The accused claimed innocent before the charges. Mr. Boskovski claimed he did not know of the police operation and he could not act to control it; Mr. Tarculovski insisted the operation was legitimate and the victims were guerilla fighters.

During the trial the Court heard around 60 witnesses, reviewed 11.000 pages of written statements by witnesses who did not take the stand, and considered about 1,000 pieces of evidence.

In his verdict judge Kevin Parker said the Court had found no evidence of guilt for Mr. Boskovski. The prosecution had proven the guilt of Mr. Tarculovski but in view of the Court had not managed to identify the persons whose orders Mr. Tarculovski had been following in Ljuboten, given that he was an official of lower rank.

The Hague prosecution had asked for 12 and 15-years sentences for Mr. Boskovski and Tarculovski respectively. That was already interpreted by the defense and experts as weakness of the prosecution which usually asks sentences in the order of 30 years.

The prosecution now needs to decide if it would appeal, but according to experts it would be difficult to reverse the verdict on Mr. Boskovski. The defense of Mr. Tarculovski has already announced it would appeal the 12 years.

"The Court's verdict is contradictory and we will appeal it", stated Mr. Tarculovski's attorney Antonio Apostolski.

A small government delegation went from Skopje to The Hague to support the indictees during pronunciation of the verdict, comprising the ministers of justice, interior, and transport, and some members of Parliament. They had brought back Mr. Boskovski to Skopje on the small government plane the next day.

Mr. Boskovski was received back as a hero. Prime Minister Nikola Gruevski greeted him at the airport, together with a crowd of fans. As Macedonian custom would have it, he was offered bread and salt. Music, general euphoria, and T-shirts with his name flooded the place . His first act as he stepped down from the plane was to kiss the ground.

"After a difficult time, a Macedonian Golgotha we had to go through, I have another responsibility. To take care of the family of our brother Jovan Tarculovski. To help all we can." said Mr. Boskovski.

Mr. Boskovski said he had confidence in the justice of The Hague and that he hoped Mr. Tarculovski would get it too.

Families of victims from Ljuboten were horrified by the acquittal of Mr. Boskovski. "This is a scandal" said Kani Jasari, father of two men who were killed in Ljuboten. Their brother, Afet Jasari, said he had nothing more to look for in Macedonia.

Mr. Boskovski has been on the front pages since his return. Cameras followed him to his native village of Celopek. Crowds greeted him at a concert he attended with his wife in Ohrid. Some papers have already hinted that the office of the President is vacant next year. Incumbent Branko Crvenkovski has recently said he would not run again.

Mr. Boskovski has not said much about going back to politics. He said he would wait for the trial to fully end first.

In addition to The Hague, he has other legal issues haunting him. When he fled to Croatia from Macedonia back in 2004, Croatian authorities arrested him in connection with the controversial case of "Rastanski Lozja". The case involved the allegedly staged murder of seven Asian economic migrants by Macedonian secret police in 2001, with the purpose of presenting them as terrorists and winning favor with the West. Mr. Boskovski who was the Minister of Interior was suspected of having helped the operation.

The trial for Rastanski Lozja took place in conditions of severe political upheaval in Macedonia. The accused were eventually acquitted.

But Croatia pressed charges against Mr. Boskovski, who has already fled there. Now, it appears that Zagreb might pursue the case. Trouble is not over for Mr. Boskovski.

Including detention time in Croatia before he was sent to The Hague, the former minister has already stayed behind bars for over four years.

According to Hague rules, detainees are not entitled to compensation in a case of acquittal.