A Huge Victory and a Huge Shame 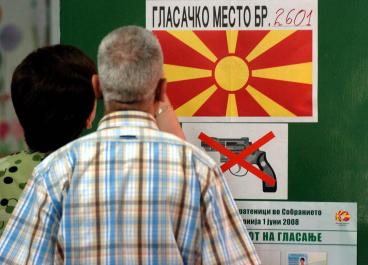 The Sunday national vote brought a huge victory for ruling VMRO, but also a huge embarrassment for Macedonia.The numerous violent incidents which took place on election day, and even cost human life, pushed the country back on its European path

The Sunday national vote brought a huge victory for ruling VMRO, but also a huge embarrassment for Macedonia.

Macedonia failed to organize free and fair elections, said all international observers. The numerous violent incidents which took place on election day, and even cost human life, pushed the country back on its European path.

In the gravest incident of the day, a man was shot dead in a fire exchange between a group of activists of the opposition Democratic Union of Integration (DUI) of Ali Ahmeti and the special police unit Alfa, in the village of Aracinovo near Skopje. Reportedly, the shooting and car chase started after the police had tried to intervene and prevent voting irregularities.

In another incident, at least five persons, some of who bystanders, were injured in shooting in front of a polling station in Cair, part of Skopje. One of them, a 23-year old man, took a bullet in the stomach and is fighting for his life.

Police arrested Agim Krasnici, a known offender close to the ruling Democratic Party of Albanians (DPA) of Menduh Taci, together with several other men, after they stopped them in cars full of machine guns and bombs. They also had a rocket launcher and seven packs of marihuana. The detained reportedly said they were on a mission to prevent vote stealing by opponent DUI.

Around 30 persons overall have been detained in relation to incidents on Sunday.

Election irregularities included the usual group voting, stealing, "packing" or destroying of ballot boxes, and intimidation of voters. In some places incidents were taking place in front of the very eyes of international observers and the diplomatic core in the country.

"People felt proud of the fraud they committed and this is what shocked us most as observers. They didn't hide", said US Ambassador to Macedonia, Ms. Gillian Milovanovic.

Throughout Monday Macedonia was subject to the synchronized rebuke by the international factor. The bottom line is - the country failed the test.

By and large incidents took place in the Albanian camp, between arch-rivals DUI and DPA, and were limited to several communities notorious for high crime rates, but this is still a lousy excuse for the country.

"You need to take every effort to prosecute not just the perpetrators but also the initiators of the violence", said the European Union Ambassador to Skopje, Mr. Ervan Fuere.

Prime Minister Nikola Gruevski had a phone conversation with Enlargement Commissioner Olli Rehn yesterday and promised him every effort to have the rerun, in the places where voting had been suspended due to irregularities, free and fair.

As much as Macedonia had clearly failed, the international factor underscored the final assessment would also depend on how the country deals with the irregularities and how it completes the rerun, where needed.

"We will observe your efforts to deal with the incidents. This will be the focus of our attention and the final report will depend on what is being done in the period until and during the rerun", said ODIHR chief Mr. Robert Barry.

Beyond the shame which will follow the country for some time to come, and will definitely reflect in the European Commission's progress report this autumn, the elections as predicted brought a landslide victory for ruling VMRO.

The VMRO coalition led by Prime Minister Gruevski won 64 seats in parliament, out of the total of 120. This means that Mr. Gruevski is looking ahead to 4 more years of stable majority in parliament.

A victory of this magnitude is unprecedented in Macedonia's short history of political pluralism. The VMRO coalition won around 480.000 votes, or around 170.000 more than in the 2006 elections, when it also carried victory.

The opposition party in the Macedonian camp, the social democrats (SDSM) won 28 seats.

In the Albanian camp, to some surprise with respect to the poll predictions, DPA and DUI came out even, with both winning 13 seats. Polls have been predicting a steady lead for DUI.

One seat went to Albanian PDP, and 1 to the multiethnic Party for European Future (PEI) of Mr. Fiat Canevski.

Some changes in the mandates are to be expected with the rerun in two weeks time, but they cannot be substantial.

Mr. Gruevski got exactly what he wanted from these first ever early elections in Macedonia - a more stable majority which would allow him to proceed with his program. He will also have to deliver. In his own words, but also everybody else's, with great power comes great responsibility.

Mr. Gruevski would likely want to form a coalition with his traditional Albanian partner, DPA. This would mean 4 more years in opposition for DUI, which originally insisted on having an early vote.

In 2006 DUI won the majority in the Albanian camp but VMRO chose to form a government with DPA instead, their traditional partner. This angered DUI and caused a political crisis.

It is to be expected that both DPA and DUI would fight hard in the rerun for the vote that is still to be accounted for. If DUI would prevail, it could again claim that it is the legitimate victor of the Albanian vote. DPA would definitely try to prevent this. This might cause further incidents. It better not.

Macedonia already lost a lot in these elections.