The Business of Construction 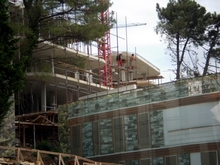 In order to improve its tourist industry, Montenegro should follow its own guidelines for promoting sustainable development and preserving the environment. However, the nongovernmental sector has been reporting misconduct by the construction industry and suspicious investments, primarily along the coast

In the beginning of the 1990s, Montenegro declared itself an "ecological state", and incorporated this in their constitution's preamble. The potential of eco-tourism has always been a central element in the political debate concerning the country's development.

In the post-war period, however, Montenegro had to face a discomforting reality: poor tourist facilities, infrastructure in decay, waste problems, and lack of running water. With help from the European Union, the government began to work on the problem of infrastructure and it has invested millions of euros in reconstructing roads and transport networks. The country's two airports have also been modernized. However, the major changes happened in real estate, where a major boom resulted in soaring house prices along the coast.

While the Central Bank of Montenegro (CBCG) has announced that last year the country had a record one billion euros of foreign direct investment (FDI), it appears that Montenegro is moving against the global trend towards preserving the environment. The country invests primarily in new construction, thereby destroying natural landscapes - the preferred leisure destination. Thus, despite the fact that Montenegro has a national tourism development strategy, the current government does little to implement it.

During the past several years, the country has had mass tourism, instead of the preferred first-class tourists. Serbian citizens, who have weak purchasing power, and the newly rich Russians, make up most of the clientele on the Montenegrin coastline.

The ancient fortified city of Budva, once the pearl of the Adriatic, has been subject to anarchic urbanization. Sveti Stefan, a small hotel-island that once served as the destination of the international jet set, suffers from the devastation. Tall buildings have been erected in front of the island, often without a building permit.

The weekly magazine Monitor reported on June 6 the great optimism of the Minister of Tourism, Predrag Nenezic, who felt satisfied with the just opened season, stating that "almost 80% of the annual action plan had already been realised." Nenezic admitted, however, there would be 5-10 days of delay in road reconstruction. In addition, he said that problems with lack of water and power supply would be "under control".

The real news for the summer of 2008 was the new environmental tax for local and foreign vehicles, which the government imposed in attempt to protect the environment from increased summer seasonal traffic from abroad.

For his part, the mayor of Budva, Rajko Kuljaca, has announced that the nearby water desalting facility in Zavala would be operational by the end of June. However, neither the minister nor the mayor addressed the issue of meeting the strategic objectives of high-quality tourism. Nor have they talked of the state's inability to stop abusive construction or the problem of drastic devastation of landscape around Budva, which has by now become a metropolis of Montenegrin tourism. Budva entered the 2008 season with intensive construction underway all around the city.

In addition, the minister has not explained why the luxury hotels around Sveti Stefan are closed in high season for the second consecutive year since the resort was given in concession to Aman Resorts, a Singapore company.

On the cape of Zavala in Budva municipality, Russian billionaire Sergey Polonsky, president of the Mirax group, is building a luxury hotel complex named "Astra Montenegro". The company started the works in partnership with Montinvest owned by Svetozar Marovic, deputy president of the ruling DPS party.

MANS filed charges with the state prosecutor against Marovic and his alleged attempt to create a cartel in the construction business together with members of his family and some Russian citizens. MANS claims that through his political and family ties Marovic had control over seven public companies and institutions in the Budva area, six of which operate in urban planning and construction.

Initially, Marovic dismissed the claim as part of a dirty campaign against himself and his family. Nevertheless, in June 2008, he sold his stake in Montinvest to his partner Dragan Sekulic, explaining the move with just a few words on Radio Budva: "I did it so that my name does not create problems to the big investors, even though I was just a co-owner of the land. It is clear that for a small part of the public, my involvement was more important than the fact that a known investor has come to build a hotel."

Montinvest withdrew from the venture by selling its stake to Mirax for 10 million Euros. MANS has been claiming for months that the construction on Zavala was illegal and considers Marovic's withdrawal suspicious.

The Monitor also reported on the scandal surrounding the old hotel Avala in the centre of Budva, currently being renovated by Beppler and Jacobson, a British company. The old building was torn down, even though a 1948 law and the 1994 central register protected it as a cultural monument and noted its location on an archaeological site in the old town.

Three ancient monuments in Budva have been endangered: the remains of the Roman palace Villa Urbana, located under the reception hall of the old hotel, that is, the hypocaust (ancient Roman heating system underneath the floor); Roman mosaics; and the remains of the Budva necropolis.

Because of UNECO's recommendations in 1962 on protecting the area of the old hotel, the National Institute for Protection of Cultural Heritage rejected the request of Ana Kolarevic, legal representative of Beppler and Jacobson and sister of Prime Minister Milo Djukanovic, for renovation of the old hotel and expansion with new floors.

In the end, Beppler and Jacobson stopped asking for permission. They simply decided to build a new hotel in the place of the old one.

Thus, many doubt that Montenegro will succeed in promoting sustainable development based on long-term growth and protection of natural environment, as set forth in its strategic plan for tourism development.