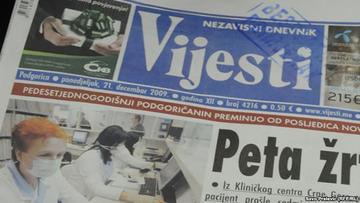 A vehicle belonging to Montenegrin daily Vijesti was set on fire in the Adriatic republic's capital in the early hours of February 13th (Thursday). This was the latest in a series of attacks against the staff or property of the Podgorica-based independent newspaper in recent years

No one was injured in the incident, in which the yet unidentified perpetrators poured gasoline over the car, a Nissan with the daily's name marked on its front doors, and then set it ablaze, according to police.

On December 26th, the daily was the target of a bomb attack that caused material damage to its offices. The explosive device was placed under the windows of Vijesti Editor-in-chief Mihailo Jovović's office, and went off at a time when he and at least 15 other staff members were inside the building.

The South East Europe Media Organisation (SEEMO), an affiliate of the International Press Institute (IPI), and other international media watchdogs condemned the attack and urged the Montenegrin authorities to make sure that the perpetrators are brought to justice.

"In the past years numerous threats and attacks have been directed against Vijesti staff members," SEEMO Secretary General Oliver Vujović said in a special statement on December 30th. "Considering the frequency of attacks against the newspaper's journalists and its property, I am led to believe that this daily is a direct target. I urge the police, courts and the Montenegrin state prosecutor to concentrate on this case and on all of the attacks and threats against Vijesti journalists in recent years."

SEEMO also listed Tufik Softić, a Vijesti correspondent in the town of Berane, investigative reporter Olivera Lakić and Zeljko Ivanović, one of the paper's founders, among the targets or victims of previous attacks against the paper since 2007. In separate incidents in the summer of 2011, four of the daily's vehicles were either torched or set on fire.

"Impunity for violence against media personnel is the rule in Montenegro," Paris-based media watchdog Reporters Without Borders (RWB) said in a statement on January 7th. "The tolerance that the justice system shows towards those who attack journalists is unacceptable," it added, also calling on the authorities to "do whatever it takes to ensure that those responsible are brought to justice and to establish a safe climate for journalists, which is necessary to guarantee freedom of information."