Sexist advertisements are invading Chişinău, the capital of Moldova. The image of the woman depicted is clear: sexy and beautiful, a good servant for men, a hardworking housewife. Two companies using such advertisement have already been sued. But people still bump into billboards with sexy women all over. A feature story

According to a survey on gender issues carried out in Moldova, a woman's beauty is seen as having an important role in her becoming successful and half of all women do not aspire to a job other than housewife. These stereotypes are nowadays being reinforced by advertising companies. Human rights activists in the country claim that businesses in Moldova are discriminating against women by using sexist advertisements to raise sales.

Many advertisements depict sexy women who exude charm and glamour wearing sexy socks, as it is the case of “Ponti” Ltd. Images of women wearing underwear while in public, washing dishes, or serving beer are common. Such use of women in advertisements by businesses has annoyed a group of human rights NGOs, which sued two major companies.

Tension surrounding the ads has heightened to the point that activists have filed lawsuits against two companies: “Evelin di Costacurta”, a furniture production company, and “Ponti” Ltd, a Moldovan manufacturing company specializing in tights and socks. The case will present a hard decision for the judiciary since the Publicity Law in Moldova is open to interpretation as to whether sexist advertisements violate women’s rights.

The Ponti sock company, operational in Moldova for 10 years now, recruits women for advertisements, first submitting candidate models to a serious selection process in order to select the most “beautiful”. Lately, such efforts to attract clients have intensified, affirms the director of “Ponti” Ltd, Victor Coşulean: "We choose the most attractive women, we pay attention to the legs, to the silhouette, and they should have pleasant gestures. The woman should also correspond to a certain height, be proportional, and have certain facial features. In Moldova there are many girls who want to pose for advertisements - it is not hard to find them." 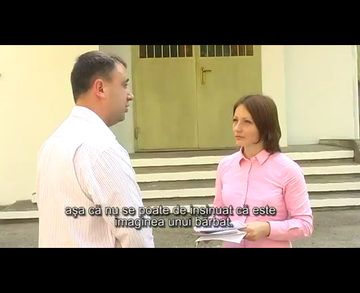 Natalia Ghilaşcu met representatives of the companies that have been sued, the deputy architect of the Chişinău city council responsible for authorizing advertisements, and civil society representatives that started the legal action against sexist advertisement in Moldova's capital. Click on the picture to watch the video

According to lawyer Doina Ioana Straisteanu, such images are nothing more than the exploitation of women for commercial purposes. In her opinion, the sexist presentation of models offends customers. “While models are satisfied, we are not! Of course they look good: it is because they are paid for having certain features. Not every woman is happy with the message." On the other hand, representatives of the company argue that such advertising portrays the lifestyle of Moldovan women who prefer to wear sexy clothes. "Women on street dress much sexier than those in our advertisements. I do not think that our advertising discriminates against women. It would be more ridiculous to have a man posing instead of a woman!”, argued Victor Coşulean.

Evelin, the other company being sued which produces furniture, uses an even more controversial image: a woman wearing a short skirt climbing seductively on an office desk to serve her boss coffee. A representative of Evelin Ltd, Alexei Ianiuc, said the image is very creative and original. “This image was not created to demean the woman's lifestyle. On the contrary, it shows her being free and independent.” One of the complainants, Scaleţchi Veronica, disagrees with this message. “The first thought that comes to mind when you see this image is of your husband having a similar relationship with his secretary, which is not the case. The job of secretary is different. I find it offensive.”

“It makes people believe that this is the only way women can advance and develop a career: by showing up in a short skirt and using their sexuality,” added lawyer Doian Ioana Străisteanu.

Alongside “Ponti”, the Chişinău city Council is also being sued for authorizing such advertisements. The responsibility for approving the ads lies with deputy architect Radu Blaj. The specialist is convinced that the endorsed billboards respect moral principles. "The law clearly restricts advertising cigarettes, while swimsuits are not even mentioned. This is a normal thing, beauty is created by God”, said Blaj when asked about his decision. He said he recently tried to be even more objective about approving new images, consulting other colleagues about whether swimsuit images could be approved. “All agreed”, said Blaj with a smiling gesture.

The majority of citizens pass by sexy images almost every day. Some of them look at the ads with skepticism while others believe they portrays reality. A few young ladies said they would prefer the woman in one advertisement, featured on a city street, to be dressed. “I do not really like the fact that the female body is used in advertising for commercial purposes. It is a human body and should not be so easily sold." Other young lady, passing by, saw nothing exceptional. “This is how it should be”. Some young men were worried about the impact of such advertisements on children, while others suggested that it would have been better if such mages were displayed inside a building.

Since the Publicity Law in Moldova does not ban discriminatory advertising, lawyer Straisteanu is sure that even the judiciary will filter this trial under their own ethical principles. In the area of the former Socialist bloc, only Romania and some countries in the Balkans have adopted specific restrictions for sexist advertising. According to the representative of the Committee on the Elimination of Discrimination against Women, Violeta Neubauer, the majority of advertising companies in the European Union use an Ethical Code in advertisement. She says setting up such regulatory commissions to evaluate ethics would be a great practice in the case of Moldovan agencies. “It is quite difficult to sanction those who break such principles because the private sector is an autonomous entity. Nevertheless, by adopting good laws, the Moldovan government can make those businesses become responsible.” The Republic of Moldova assumed a responsibility to respect the provisions of the Convention for the Elimination of Women Discrimination, which now seems to be more of a symbolic than practical document. Human rights activists are optimistic, though, that sooner or later Moldovan authorities will abide by European Union recommendations and vote for an anti-discrimination Law.