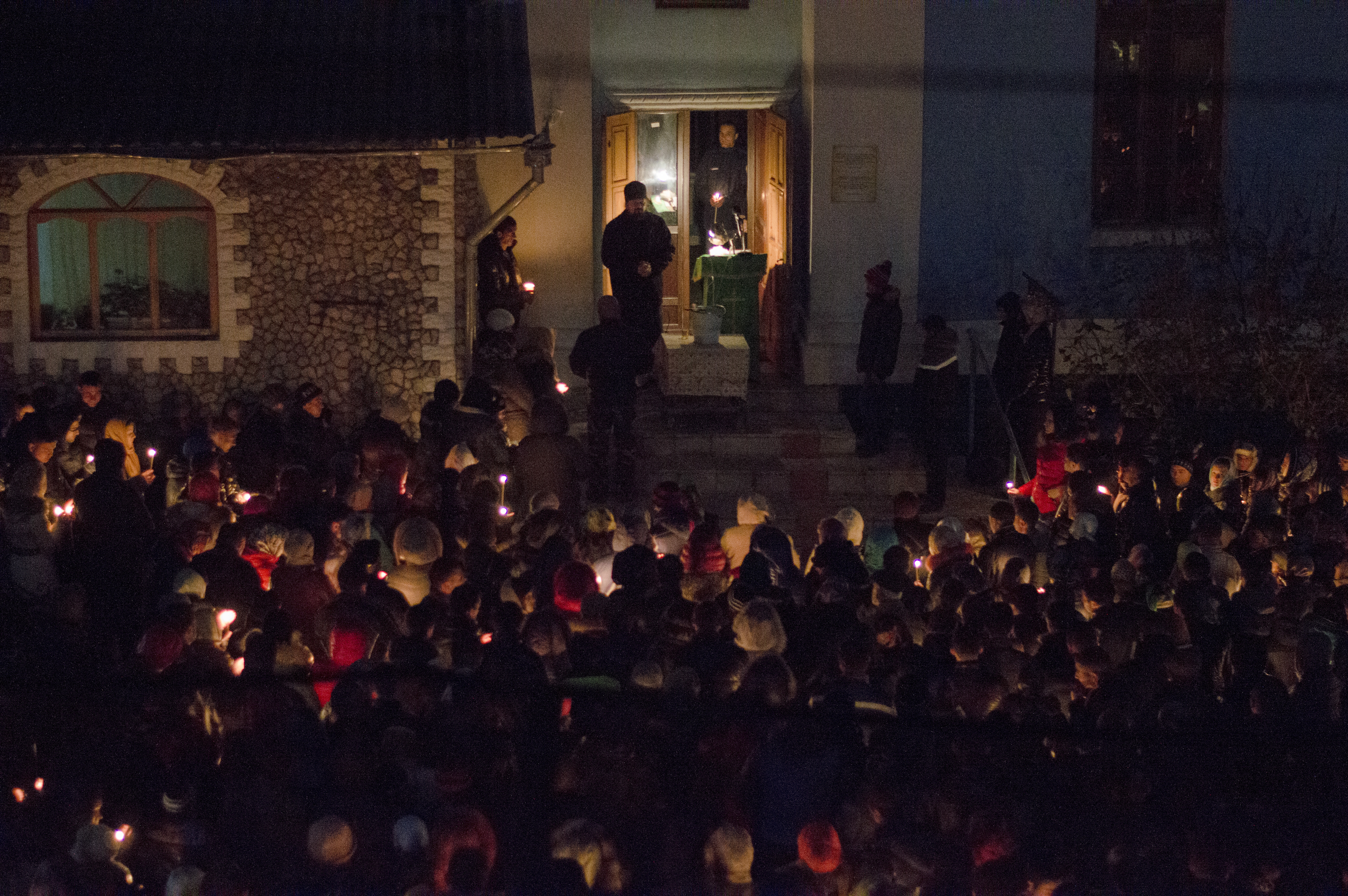 Despite the local ecclesiastical institutions' disapproval, in the Monastery of Saharna, a hundred kilometres from the Moldovan capital Chişinau, mass exorcism rites are taking place

If, until 20 years ago, from Chişinau and the surrounding villages, pilgrims went on foot or by cart to the Monastery at Saharna – roughly 100 km north-east of the capital in the district of Rezina – today the ritual of devotion has assumed traits closer to an organised tourist trip.

Every Thursday, as the sun sets, several marshrutkas (little vans used as taxis) leave the chaotic city centre for the quiet, open spaces of the Moldovan countryside near the river Nistro, where a motley crowd squeezes into one of the most famous – in some ways most mysterious – places of worship in the country.

The elderly, the young and even the odd, gaunt tourist form a coming and going of shadows – it's nearly midnight – among the cloisters, corridors and chapels of the monastery complex. And without it being explicitly stated, most of those people are there awaiting the main event of the evening: a mass exorcism.

The Saharna Monastery is a hundred kilometres from the Moldovan capital Chişinau. Every Thursday, mass exorcism rites take place. Look at the photos by David Julià

Nothing occult or excessively esoteric, on the contrary, at first one feels to be immersed in a kind of bazaar of the faith where every chapel and every crypt corresponds to a specific service of care and comfort, where people flow from one point to another, sure of themselves, looking around to find what they most need. Some light candles in memory or support of their dear ones, others queue to kiss relics or receive blessings, others plunge into a pool with a massive cross rising from its rim.

Then, towards one a.m., most of the pilgrims begin to group in a church still being built and which resembles an industrial shed. Here, behind a modest altar made from simple planks of wood, four orthodox priests celebrate a long service citing in their prayers also the names of those who have asked to be included. Who knows if it is exactly those people, given their strong devotion, who react the most violently: murmurs, groans, shouts, fainting, retching by some of the faithful accompany the mass which continues to proceed as before. Meanwhile the others present see the cases of “possession” with mixed feelings of fear and interest, or open scepticism which sometimes turns to hilarity, especially among the younger ones.

Criticism of the Synod

On February 12th of this year the Moldovan Orthodox Church officially prohibited the practices taking place in the the Monastery of Saharna. The Synod pointed distinctly at spectacular and collective forms of exorcism, in its opinion useless and counterproductive for people in need of treatment and declared that those practices should be restricted to “rigorously selected” officials of the Diocesan Assembly.

And yet, at least until today, rituals like the one at Saharna seem to continue undisturbed. Similar celebrations are also carried out near Tiraspol, in Transnistria, by Father Serghei (who usually gives individual audiences) and in Chişinau, in the Armenian church. These examples of popular spirituality are strongly rooted in Moldovan land and likewise in the neighbouring region of the same name in Romania. It is worth noting that in precisely this area in the Monastery of Tanacu (350 kilometres northeast of Bucharest), one of the most tragic events linked to exorcistic practices took place, leading to the death of the young nun Irina Cornici. This left its mark on the country, the film “Beyond the Hills” and the book “Confession at Tanacu” being drawn from the episode.

On the basis of the recent decisions of the Orthodox Synod, such episodes could be considered expressions of a rural, peasants' way of life, now on the decline. But the history of religious feelings in Eastern Europe is in no way linear: after the fall of the Soviet Union a massive return to religious faith was recorded, just like a backlash to the geopolitical changes in the area. “Faith” is here intended in the broadest possible sense: where a general sense of magic, which characterizes the interstices of this society, weaves through the more institutional aspects of the various denominations.

The whole religious phenomenon contains contradictory and ambiguous elements which, especially in the context of Moldavia, make it difficult to evaluate its range. As the sociologist Vitalie Sprinceana underlines, “considering that the vast majority of the Moldovan population generally declares itself as Orthodox […] there are insufficient accurate and reliable studies that show the valency, facets and depth of that faith. The study on European Values in 2008 brought to light that only 14.4% of Moldovan citizens go to church at least once a week, an equivalent number practically to those who don't go at all or only once a year (11.9%). A further 47.6% attend places of worship for special festivities. Thus the simple fact of going to church does not necessarily imply a strong religious sentiment.”

“The figures become in some way paradoxical when the study examines the knowledge of the basic dogmas of the creed,” continues the researcher, “and discovers that 34% of those who regularly attend church state they believe in the reincarnation (which is not part of the Orthodox faith), compared with 18% of those who do not go to mass or go only once a year. The discrepancy between the canonic principles and the forms of individual belief leads one not to take the definition of Christian Orthodox literally, since it conceals peculiarities and contradictory ideas yet to be thoroughly explored”.

Furthermore, another recent study seems to confirm that disaffection towards the Church is high among Moldovan youth. However, it must be noted that many of those participating in the exorcism at Saharna are adolescents. Looking at their faces, I superimpose them on the “squadrons” of young people activated, at the invitation of the Orthodox Church, to block the parade in favour of LGBT rights last year in Chişinau. It is difficult to say how sincere and well-rooted is their devotion and their attachment to the canonic values of their creed, but their presence certainly suggests deeper motivation than a simple casual interest.

If for some it is just curiosity about the bizarre and unusual aspects of the event that lead them to visit Saharna, for others it could be a way to satisfy a need to take part in something which in the general Moldovan context finds no outlet. The exorcised body at Saharna and the other monasteries could be – symbolically – the whole social body trying to build its own cohesion through the sacredness of the rites.

As the celebrations end towards two a.m., a heavy rain beats down on the monastery while the “pilgrims” head for their cars and the marshrutkas waiting for them, or they walk off in the direction of the nearby village. The people go back to their routines, chaos and frenetic daily life, while there still resounds the echo of a “festive” night which accepted the strangest habits and, probably, the deepest needs.