A pass to paradise 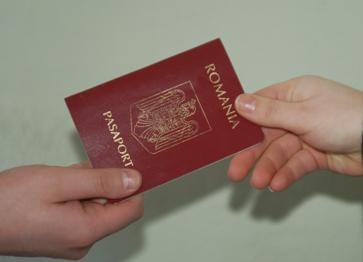 Following the post-electoral violence in Moldova, Romanian authorities approved an urgent act which simplifies the procedures to obtain Romanian citizenship. Despite the tough reactions of Chişinău's authorities, thousands of Moldovans rushed to apply for a Romanian passport

Days after the violence that took place on 7 April, thousands of people rushed to the Central Post Office and the State Archive in Chişinău, Moldova. At the first institution, people are sending standard forms to the Romanian Consulate in order to be invited to hand in applications to obtain Romanian citizenship. At the second one, people are trying to acquire the requisite official documents demonstrating that they have a relative who was a Romanian citizen between 1918 and 1940. Apparently, this onslaught of requests is not related to the elections. The massive influx of people at those institutions, though, is a direct consequence of the events of 7 April.

As the devastation of the Parliamentary Building and Presidential Palace occurred, the first reaction of the Moldovan authorities was to accuse Romania of backing these events. What followed was the introduction of a visa regime the next day for Romanian citizens and the expulsion of the Romanian Ambassador to the Republic of Moldova.

It should also be mentioned that the Party of Communists was always obsessed with Romania, even accusing Romania of being "the last empire of Europe and a country that is trying to destroy Moldovan identity and sovereignty." Those words came from the incumbent President of the Republic of Moldova and leader of the Party of Communists, Vladimir Voronin. However, it is for the first time that these words have been backed up by actions in such an extreme way.

The news that the Romanian Government is softening the procedure to obtain Romanian citizenship resulted in a tough reaction from the Moldovan authorities. They accused Romania of trying to annex Moldova by depopulating it. The President of the Republic of Moldova, Vladimir Voronin, declared that if Romania continues to provide citizenship to Moldovans, the authorities will abolish dual citizenship, still legal at the moment in Moldova.

While the official reaction was very negative, thousands of people rushed to send letters at the Romanian Consulate in Chişinău and to get the necessary documents to organize their citizenship applications in accordance with the requirements.

As they have done before, the Moldovan authorities appealed to the European Union to punish Romania for its policy on the citizenship problem. Not being able to influence the Romanian position on this issue, the Moldovan authorities had always tried to involve the European institutions in an attempt to obtain an EU interdiction on granting mass Romanian citizenship to Moldovans.

For years, the EU expressed prudence regarding the matter. But following the events of 7 April, the Czech Presidency of the European Union, through the Czech Minister of European affairs, Alexander Vondra, voiced concerns over the risks emerging from the simplification of procedures to obtain Romanian citizenship.

Other EU officials contacted by the "EU Observer" uttered skepticism that a mass process of granting Romanian citizenship will be put into practice. "It is just a proposal, an expression of a desire," declared Christina Gallach, spokesperson for the EU High Representative for the Common Foreign and Security Policy, Xavier Solana.

The conflict related to the citizenship problem is not new. The Moldovan authorities have a long history of trying to limit "Romanian citizenship" and the origins of the problem go deep into the first years after independence when the unionist movement (which had as its main goal the political union of Moldova and Romania) was still active. As one of the measures to counteract the unionists, dual citizenship was then declared illegal. Even so, many Moldovans applied for Romanian citizenship anyway.

For many years, Romanian citizenship had been regarded by many Moldovans as the only way to have access to a quality of life at EU standards.

The irony is that dual citizenship was introduced in the Republic of Moldova only after the Communists came to power in 2001. It soon became evident that the number of those desiring Romanian citizenship was higher than expected and the number significantly grew as Romania became a member of the EU.

Following the events of 7 April, Traian Băsescu publicly announced that around 650 thousand letters from people or families wishing to obtain Romanian citizenship had arrived at the Romanian Consulate in Chişinău. Communist authorities have said in the past that the large number of Moldovans with Romanian citizenship - the unofficial number being between 100 to 200 thousand, with an even higher number of people desiring it - is a problem of national security.

As a result, in 2008, the Communists initiated a law restricting people with dual citizenship from being elected or nominated to a range of official positions, including the post of Member of Parliament.

The adopted law was highly criticized by the opposition parties and in public opinion and was immediately contested at the European Court for Human Rights. The Court was quick in adopting a decision and on 18 November, 2008, made public its decision to condemn the Republic of Moldova on the restrictions imposed by Moldovan authorities, declaring them not justified, disproportional and in violation of Article 3 of the First Protocol of the European Convention on Human Rights and of Article 17 of the European Convention on Citizenship.

The decision was declared a clear victory by the opposition party. However, the Communist ruling party, from the moment the decision was made, stated that, despite the critics, it would not abolish the adopted restrictions for people with dual Romanian citizenship.