Between real and virtual Kosovo 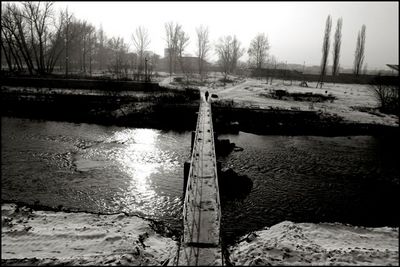 Michael L. Giffoni, the Italian ambassador in Pristina, was recently appointed to the post of EU Special Envoy for Northern Kosovo. In this interview, Mr. Giffoni talks to OBC about his new assignment

You were recently appointed EU Special Envoy for Northern Kosovo. What does this assignment imply exactly?

First of all, I would like to point out that this is not exactly an official duty; it is rather an ad personam assignment. I was appointed Special Envoy for this area by the EU Council because of my familiarity with the Western Balkan area and with European Community mechanisms. My assignment was made possible thanks to the joint action of the High Representative for CSFP, Javier Solana, and the Italian government. The appointment was then ratified by the EU Political and Security Committee (PSC) at the end of October, 2009.

The aim of the assignment is to increase EU visibility and credibility in Northern Kosovo, an area where it is extremely difficult to work without knowing the region’s intricate context. The difficult political and institutional situation is mainly due to one fact: in the region to the north of the Ibar River, ethnic Serbs do not recognise the authority of the Republic of Kosovo, even though they live in an area which is under Kosovo’s political and geographic jurisdiction. The problems of Northern Kosovo are, however, part of an even more complex overall situation in the Republic of Kosovo, a place where many different real and virtual worlds co-exist.

On the one hand, the Republic of Kosovo’s institutions have been recognized by a large part of the international community and formed in a way allows them to almost fully exercise their rights of sovereignty within Kosovo territory, even if there are some aspects of sovereignty yet to be clearly outlined. For example, Resolution 1244 is formally still in force in Kosovo, although only in name. Resolution 1244 does not really reflect the current situation in Kosovo anymore. On the other hand, most members of the Serbian community in Northern Kosovo (unlike members of other Serbian communities in other areas) do not consider themselves a part of the Republic of Kosovo.

If we want to prevent conflicts from arising again in the region, there are at least three levels of the real (and virtual) nation of Kosovo which must come closer together. I believe this must be the main goal of international institutions, especially the EU.

What do you think about the state of Kosovo's Serbian community two years after Pristina’s declaration of independence?

There is a growing difference between Serbs living north of the Ibar River and those living to the south. The latter are getting increasingly involved in the Republic of Kosovo’s civil society and they already benefit from a growing range of services provided by municipal authorities (rather than by the state). Wide participation of Serbs in Kosovo’s latest administrative elections proves the Serbian community’s increasing willingness to become full-fledged members of the Republic of Kosovo. In recent years, ethnic Serbs living in the so-called “enclaves” have taken a different path from that of their Northern counterparts. Of course, this is only the beginning of integration, but it seems that something is slowly starting to change.

For ethnic Serbs living north of the Ibar River, integration is more problematic for various “situational” reasons: first of all, they are closer to Serbia, and, secondly, the social fabric of the Serbian community north of the river is more “close-knit” than the Serbian community south of the river. However, this would not prevent ethnic Serbs in the North from becoming more integrated into the life of the Republic of Kosovo if that was what they wanted, at least from an administrative point of view. Northern ethnic Serbs have recently increasingly started to pay attention to what Serbian communities south of Mitrovica are doing, and they are beginning to take into due consideration the reasons why many of their Southern counterparts actually voted in the administrative elections.

What are the first steps you plan to take as the new EU Special Envoy?

My priority is to promote the EU’s vision for the future of Kosovo in Northern Kosovo, which is a vital area of the Republic. At the moment, the European Union is not visible enough north of the Ibar River: this leads people to (wrongly) conclude that the EU has no plans for the area. An “EU-House” will soon be opened in North Mitrovica. In the short-term, the main aim of the EU House is to be a tangible symbol of the European Union’s physical presence in Northern Kosovo. In the long-term, we hope that the EU House will become the permanent headquarters of the EU in Northern Kosovo.

Of course, increasing EU visibility is not the only aim of my mission. We are also going to try to fill the “communication gap” between the Serbian and Albanian communities and to find shared solutions to everyday problems experienced by both ethnic groups. In order to do this, we need to use maximum flexibility (“soft powers”). Additionally, we will have to cope with different issues using a depoliticized approach.

Only the EU has the political credibility to tackle such a challenge in an effective way. Pristina’s authorities are not accepted north of the Ibar River, and the UN-MIK presence is barely tolerated throughout the whole country. Solving everyday problems is the only way to gain credibility with the local population.

Can you list some of the everyday problems people face in Kosovo that you would like to solve?

People in Northern Kosovo experience a wide range of problems every day. My priorities are: reconstruction of houses for refugees and internally displaced people, resolution of the land and real estate property issue, and ensuring the electric power supply.

Let's talk a little more about this issue. What do you plan to do in order to find a shared solution for this problem?

Solving the electric power problem is not difficult per se because the power network is already functioning and integrated. The goal is to make electricity accessible to everyone because electricity is a very important utility service. But the problem is quite a delicate one: while on the one hand, it is necessary to adopt a depoliticized approach, on the other hand the issue must not be viewed as simply a business matter. Indeed, if you only tackle the problem politically, Belgrade will encourage Northern Kosovo citizens not to pay for electric power if it is supplied by a government Serbia does not recognize. On the other hand, if one takes into consideration only the business-related side of the issue, KEK (Kosovo’s national energy supplier) will provide the same kind of service to everyone and impose the same tariffs on all citizens.

It is thus necessary to break this vicious cycle by implementing emergency measures in the short term and by seeking a more comprehensive, far-sighted solution for the long run. One of the possible solutions might be a sort of “strategic armistice”; this would keep the power network intact while ensuring an electric power supply to the Serbian community at the same time. As for long-term solutions, we might leave the management of power supply contracts in Northern Kosovo to subcontractors (formally under KEK’s control, but without being directly involved in the national power supply company).

Actually, no Western government has ever publicly supported the idea of partition of the Republic of Kosovo. You are probably referring to individual diplomats’ or international relations experts’ opinions, but no one has ever officially supported partition.

I have already explained and I will never stop explaining my opinion on the difficult situation in the Balkans. Like most other Balkan region analysts and/or involved parties, I firmly believe that partition of Kosovo or an exchange of territories between Kosovo and Serbia must not even be considered. We all agree about the fact that the Western Balkan area must gain stability through the increasing integration of the area into the European Union and that partition is not a solution. Changing the borders again would lead to new territorial claims and potentially lead to new regional conflicts that would be difficult to stop.

Partition is not a solution and would, in fact, generate new problems because it would bring the issue of borders to the forefront again, giving it greater importance, instead of minimizing it through a broader integration process.

I don't think that partition is a viable solution for Serbia either. For Serbia, the Kosovo problem cannot be solved by simply annexing a strip of Kosovo’s territory. For Belgrade, the main priority should be guaranteeing prosperity and stability to ethnic Serbs living in Kosovo. The same can be said about ethnic Serbs living in Bosnia, Albanians living in Macedonia, and so on.

An International Conference on Kosovo, organized by major NGOs operating in the Balkan region, took place in Rome recently. During the conference, an academic from Kosovo said that although Italy has been committed to the Kosovo cause since 1999 through its international missions (UNMIK, KFOR; EULEX etc), our country seems incapable of acting as a single body with other institutions in Kosovo. What do you think about this assertion?

I think that Italy’s role in international organizations (political, military, and those that defend the “rule of law”) and in bilateral and multilateral cooperation, as well as in support projects, is coherent and well-coordinated in loco. We are all working to further improve the quality of our work and to make our action more effective.

Reflecting on your first year in Kosovo, what do you think are your biggest achievements?

From the bilateral point of view, I believe that the most significant result of the year 2009 was the strengthening of Italy’s role as one of the main actors in the improvement of Kosovo’s institutional, economic, and social stability. A growing number of Italian enterprises are now operating in Kosovo, and other Italian actors (institutions, enterprises, NGO’s) are increasingly bidding for EU tenders in the area. Institutional relations between the two countries have grown stronger. In general, bilateral relations between the two countries are definitely positive.

Another positive aspect of cooperation between our two countries is the fact that development funds Italy pledged for the development of the Republic of Kosovo (Italy promised to give nearly 13 million Euros at a Donors’ Conference in July 2008) have either already been paid or are being paid. These funds will finance projects in three main fields: agriculture, healthcare, and the safeguarding of arts and cultural heritage.

I would like to state once again that Italy’s commitment to Kosovo is only part of Italy’s commitment to the Balkan region. It is thus necessary to see things with a broader perspective: Italy’s action in Kosovo is not limited to implementing individual projects; it is a whole strategy of which the final aim is the full integration of the Balkan area into the EU. My role in Northern Kosovo is a tangible sign that Italy has gained credibility in Europe as a leading actor in the area.