Ilinca Călugăreanu: the story of Chuck Norris vs. Communism 24/03/2016 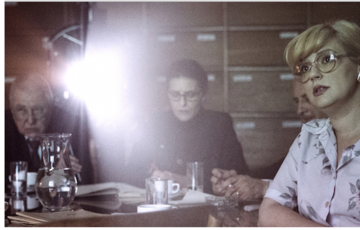 The choice among the 10 films in the competition was hard, because the works presented were all very exciting.

OBC director Luisa Chiodi awarded the prize to the film by Ilinca Călugăreanu with the following motivation: “Chuck Norris vs Communism manages to thrill the audience with a truly original story about Ceaucescu's Romania. Masterfully alternating fiction and documentary, this amusing film acquaints the public with the extraordinary everyday life of ordinary people under communist regimes in Eastern Europe, about which still little is known in the rest of the world."

The Audience Prizes have been awarded to:

For the Feature film competition, The Wednesday Child, by the Hungarian director Lili Horváth, a social drama about alienated youth built around a strong female character.

For the Documentary competition, Under The Sun by the Russian director Vitalij Manskij has been awarded the Alpe Adria Prize. The documentary is the result of a year spent in Pyongyang filming the life of an average family.

The Prize for the short film competition has been awarded to Dissonance , by the German director Till Nowak.

The Salani Award 2016 has been assigned to Banat by Adriano Valerio, with the following motivation: “Banat tells an unusual story of “opposite immigration”, that gently explores the feelings of disorientation and search for the other, which were also belonging to Corso Salani cinema. It does this using a mixture of languages, even meeting particularly happy moments, such as the captivating interpretation of a simple and moving song by an intense Elena Radonicich. For its portrayal of the inner space and the borders of Europe we also hope that this film will reach the audience it deserves.”

After viewing the 16 short films in competition, the jury of students from the Petrarca high school in Trieste awarded the #TSFFBackToSchool Prize to Love on the Top of the World by Jan Cvitkovič for the following reason: “A timeless story narrated with sensitivity, enriched by a moving performance of the two actors and a surprising ending.”