Refugees in Europe: “Let's not make it a battle of the bottom feeders” 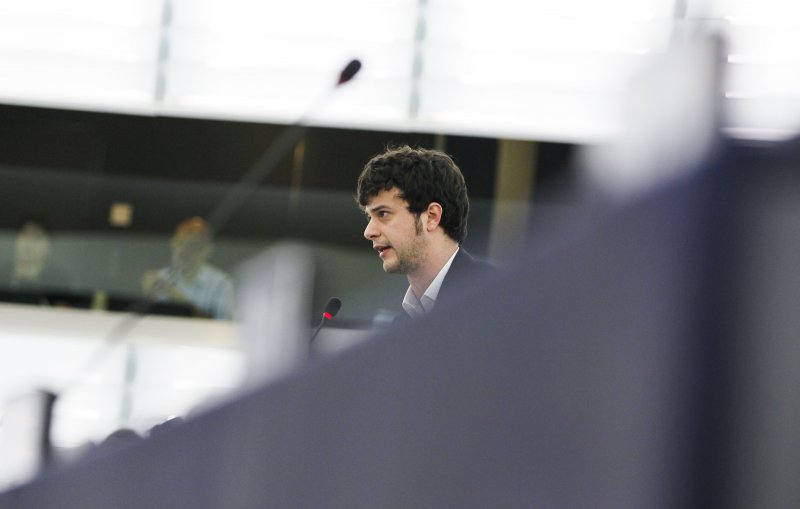 More Eu funds are needed to support reception measures for refugees as well as European citizens experiencing poverty. Interview with Brando Benifei, Italian MEP, on the management of the refugees crisis in Europe

You have been the rapporteur for the "Social inclusion and the integration of refugees into the workforce ", a report adopted by the European parliament in 2016. Where did the initiative for such a document came from?

From the beginning of its current mandate the European parliament has been determined in raising the issue of migrants and refugees. The EP was insisting for the governments to face up to the emergency situation before it erupted so evidently  starting in 2015.
The necessity to draft a report on the topic of integration arose from the consideration that Europe has often acted too late, doing too little to guarantee adequate reception conditions for refugees arriving to Europe and proper measures for their integration. We need a mind-shift in this field.

What is the most important aspect highlighted in  this report?

A compelling point is the need to identify additional resources to be invested in this field. These are to be found by pursuing the redistribution of interests produced by the Central European Bank within the eurozone and at the same time throughout the relocation of resources from other European expenditure chapters: within the European Social Fund and within the cohesion policies.

Greater resources are indeed needed to enable regions and local authorities to plan projects using European funds. In the current situation, it is important not to affect the endowment of resources which are crucial for vulnerable European citizens, such as the disabled and the long-term unemployed. Enhancing  social investment is essential to avoid racism.

Another important point raised in the report is the need to guarantee, in partnership with the private sector, support services in the fields of employment and integration. It is a matter of enabling and fostering the opportunities for integration through language lessons, certification of competence and all those best practices which are already in use at the European level. These tools are a precondition in order for individuals who have the right to protection to be integrated as soon as possible in their host society.

Could you give us some examples of best practices to be adopted in order to avoid the battle of the bottom feeders?

Funds allocated for refugees and migrants have in time shown to create wealth for all. It is important to demonstrate, with the data and figures already available, that this is an investment worth making for the future of our countries. With an effective integration policy, those arriving can find dignity, play a part in and be useful to the whole community.

Let me give an example: data from the Italian Statistical Office (ISTAT) show that our national pension system is not sustainable without the contribution which is now provided by immigrants. Workers coming in as migrants play a key role in maintaining the equilibrium of the pension and, more generally, of the welfare system. Oftentimes, they give more than they receive, mostly because they are usually younger than the national average.

What should be done to strengthen the cooperation between European institutions and the civil society working with migrants and refugees?

This challenge requires all involved actors to play a responsible role.

First of all, media have to increase their coverage of these issues, and they should be doing so by adopting a more rational approach, explaining the facts and the decisions adopted and avoiding sensationalism.

On the other hand, European institutions have to be more accessible and more visible at the local level so that regular citizens of the Union are able to actually reach out to these institutions. Existing offices, like Europe Direct, should be more visible so that the public knows better what the EU is doing and what are the opportunities available to them.

Can you quote some successful integration tool that has been adopted in Europe?

The first is the Italian example of the SPRAR (Protection system for asylum seekers and refugees ), regarded as a positive model at European level. This system is based on the effective distribution of refugees throughout the national territory and it functions on the basis of territorial partnerships involving mayors and the local political authorities. Europe has recognized this system as a good practice.

The SPRAR may certainly improve its potential if more city councils joined the system. Indeed, in many cases Italian local authorities have been inactive until an emergency situation had to be managed by the prefecture – which represents the national government at the local level – intervening to fill the gap of responsibility left by the local authority. This is a costly solution, both in economic terms and because it often provokes inconveniences for the local population.

Another good practice is the systematic use of applications for smartphones. There are several, but the most significative is Ankommen, promoted by the German national Labour agency. It provides the asylum seekers and refugees with information on their rights, their obligations, what they should do, which steps they should undertake.
The system is built on the understanding that refugees have little material resources with them; they often face great economic difficulties, but in most of the cases they do have a phone with them. It is the only way they can keep in contact with family and friends.

The fact that refugees have a phone is often mystified, but it must be understood that it is the only way they can keep contact. On the contrary it is important to take advantage of the fact that many do have a smartphone to integrate them and save the expense of other instruments. New technology, if used wisely, creates positive opportunities.

For the proposals of the report to become viable we would need to overcome the current state of emergency though a global approach to migration to be adopted by member states...

This will be possible if the European parliament keeps as a high priority in 2017, as it has in previous years, the approval of the package on the treatment of persons coming from third countries. This set of measures proposed by the European Commission provides a broad holistic approach starting from the reasons for departure and the relationship with the countries of origin up to the issue of integration.

Keeping these topics high in the legislative priorities would facilitate the adoption of decisions that are binding for all countries, even the most reluctant, and rally them to a majority which very slowly appears to be emerging: this is the position of those believing that there is the need for common responsibility among the States and a sense of solidarity within countries, territories and between people.

This emergency situation has already become structural and must therefore be faced with a serious and scientific approach. It implies planning and far sighted vision, a set of qualities that Europe has sometimes not fully shown in recent years.