Forests of Europe: a stormy future? 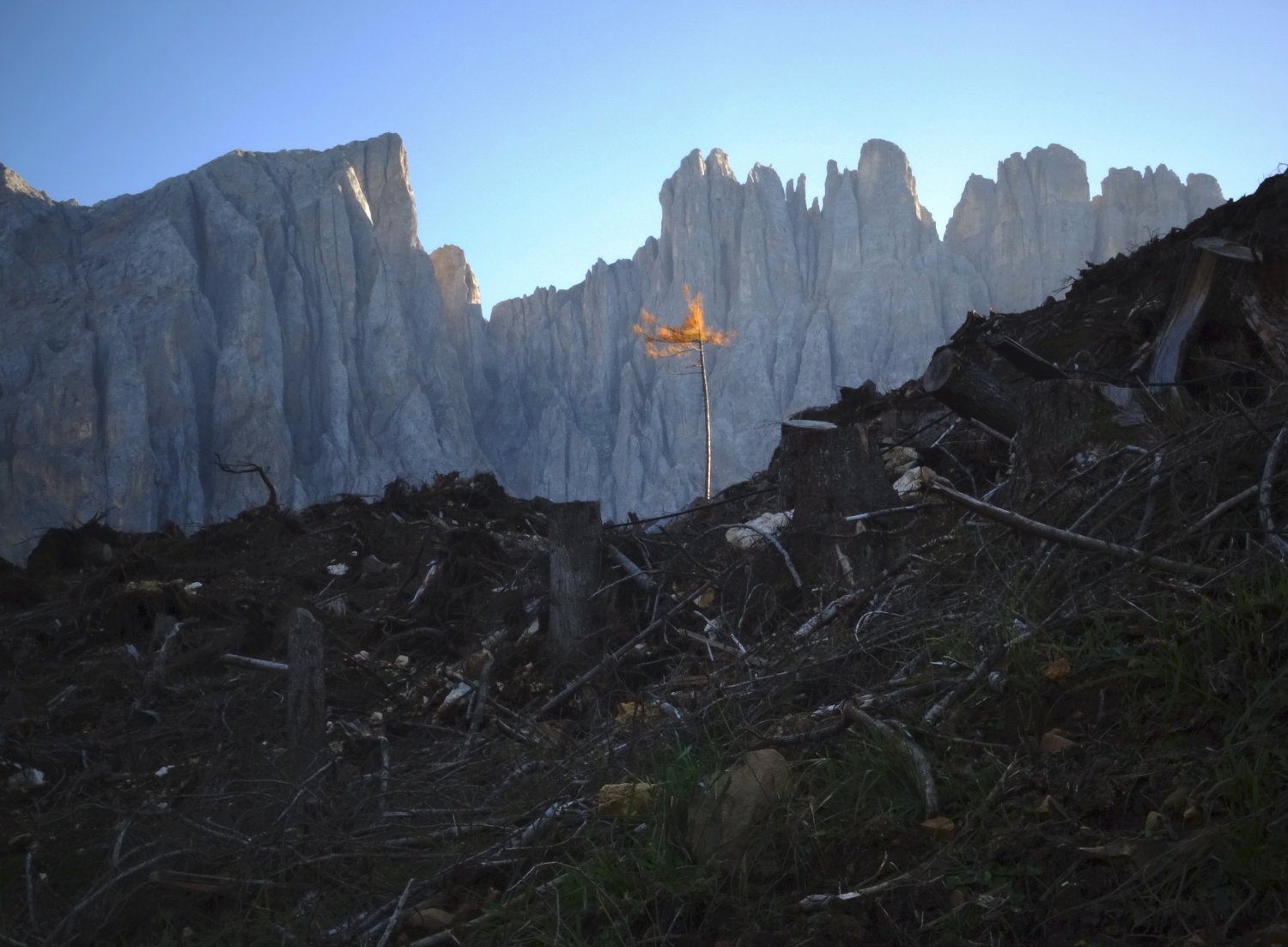 Woods in South Tyrol after the storm (photo by Marco Ranocchiari)

A year after the largest storm in Italy’s living memory, we try to measure its impact. This was no isolated incident – European forests are being hit more violently than ever

Exactly a year ago, as October 2018 came to a close, an exceptional spell of extreme weather hit Italy from north to south. Overflowing rivers, mudslides, landslides and storm surges caused major damage and at least twelve deaths, at an estimated cost of almost three billion euro.

The most dramatic element of all this was the furious south wind which lashed the whole country. In the space of just a few hours, whole forests in the north-east were literally leveled by gusts reaching 200 kilometres per hour.

Something unprecedented had happened. As the measuring stations confirmed, the quantity of precipitation and wind speeds broke the historical records, and the overflowing rivers flooded areas which hadn’t been reached for decades. The exceptional nature of the event was all too clear to people on the ground: millions of trees dropped like toothpicks. In just a few hours, the landscape had changed entirely.

The affected regions had already experienced a long series of natural disasters, which had leveled entire woodland areas. However, even in 1966, with the great flood which brought Italy to its knees, ten times fewer trees were felled by wind.

Nevertheless, storms of this kind, while exceptional, aren’t exactly unfamiliar to Europe. Wind is the major source of damage to continental European forests (much more so than fire), with more than seventeen million cubic metres of trees blown down each year – a figure which, according to estimates, could double by 2050. The areas most affected are central-west Europe, especially the countries facing the Atlantic, and northern Europe.

In 1999 the “Christmas storms” Lothar and Martin caused unprecedented damage: 240 million cubic metres of woodland were flattened. France and Germany were the countries most affected, with 176 and 34 cubic metres destroyed, respectively. Direct victims numbered around 140, and at least one hundred people died the next year during the perilous restoration process. The timber market was ravaged, and the total damages amounted to over ten billion euro.

Taking a look at similar catastrophes, even storm Vaia in October 2018 pales in comparison. Storms of this kind strike only rarely on the southern side of the Alps. While one event is not enough to blame global warming, numerous studies indicate that storms in the future are likely to affect much larger areas, and coniferous forests (like those in the Alps) will be the most vulnerable.

If the storm hits the mountains

The massive damage to forests over the past year have had a particularly bad impact in eastern Trentino and Belluno. Mountainous regions are more fragile, and vulnerable to hydrogeological instability, especially in an era of climate change and depopulation.

Within the affected woodlands, more than forty percent of trees were completely leveled, mostly on the steep, high-altitude areas. These areas, once stripped of trees, are prone to avalanches and rockslides, sometimes close to inhabited areas, streets or other infrastructure. In the province of Trento alone, 280 sites are identified as at risk in the aftermath of Vaia, and this is without taking into account all the tricky and dangerous work involved in removing stumps and making these areas safe. 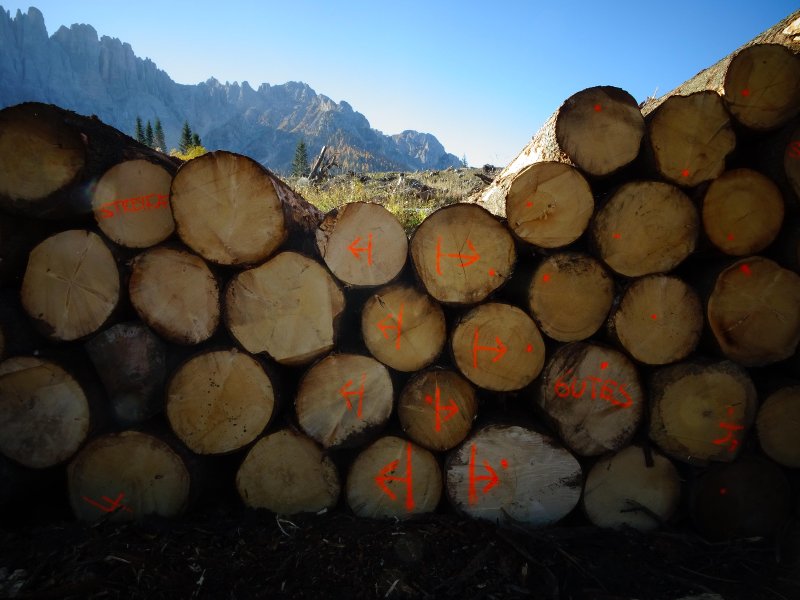 While a major portion of the regional economy is based on mountain tourism, 2150 kilometres (40 percent) of the hiking paths in Trentino have been damaged – and that’s without counting the 1800 kilometres of compromised forest roads. Following the storm, the price for felled timber dropped by 31.8 percent, and 63.4 percent for standing timber. A lot of timber remains on the ground, and it’s feared that in spring 2020 bostrichidae beetles (xylophagous coleoptera) will descend upon all the dead wood, before attacking the living trees and doubling the extent of compromised woodland.

The “hammer of God”

As is often the case, crises are followed by opportunity. “When the wind blew hard among the trees, uprooting many,” writes Marco Borghetti in the journal of the Italian Society of Silviculture and Forest Ecology which he directs, “the old foresters used to call it the hammer of God”, a reference to the tool traditionally used to mark trees for felling.

In the Triveneto the forests have been shaped by centuries of human care and labour. The type and age of the trees bear witness to historic moments, such as the reforestation following the devastation of the First World War. The forests consisting almost entirely of red spruce trees, mostly of the same age, are the best adapted to silviculture in the area, but also the most vulnerable to storms like Vaia. “The disturbances caused by the wind are necessary conditions for the forest’s regeneration,” explains Borghetti. This is especially true of the high altitude areas. “Before long we’ll discover the positive effect of the storm; it’s part of a natural cycle which shapes the forest”.

It’s a common belief that forests are disappearing across the world. In fact, in Europe, the opposite is the case. Over the last thirty years in Italy the woods have gained almost seventy thousand hectares per year, and the north-east is no exception. From this perspective, the destructive power of Vaia seems less dramatic, and it’s important to bear this in mind when we look to the future.

“Once the woods were the primary source of income for a poor and marginalised population,” continues Borghetti. “Now it’s different, and we can adjust our technical and management choices based on scientific knowledge and observation”. The heritage of the forest bears witness to the passage of time, and now, perhaps, time is telling us that it’s time for more careful management, for paying more attention, case by case, to diversity and resilience”.

Reforestation in the north-east will begin next year; priority will be given to the destabilised slopes. The modern criteria for reforestation require a limited number of plants, concentrated in small groups spaced out in order to allow the growth of a greater variety of accompanying species. Large surfaces may also be left in their natural state. However, there will also be an effort to restore the meadow and pasture areas once characteristic of the Alpine countryside: due to depopulation and developments in production activities, these have been gradually abandoned and “eaten” by the woods.

Vaia, in conclusion, is a watershed. What the mountains in the north-east will look like in the future will depend in major part on the choices we face today. Just like the rest of the planet.