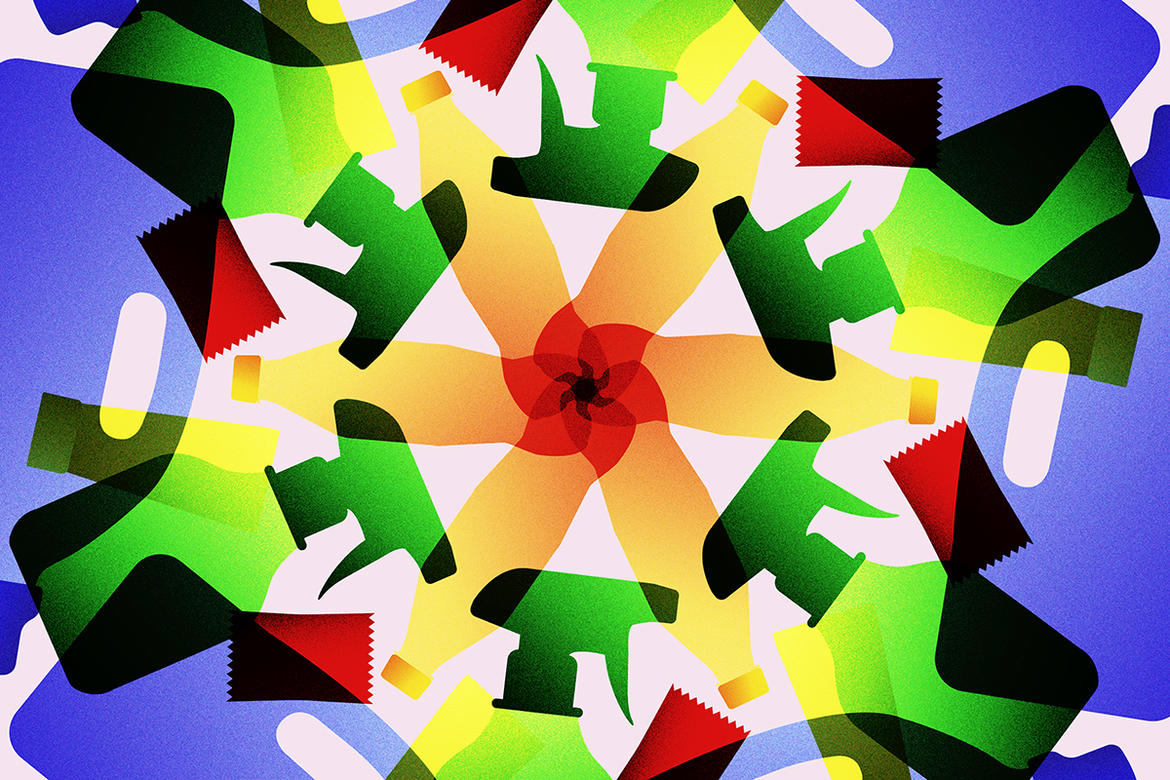 Two-thirds of pledges to go greener on plastic fail or are dropped, a DW investigation has found. Here's how European food and drink companies break their own commitments, and how legislation might hold them accountable

The French food giant Danone made an ambitious promise back in 2009: Within two years, 20-30% of the plastics used in the company's water bottles would be made from recycled materials. Danone's sustainability reports called the measure "a lever for reducing packaging weight and decreasing CO2 emissions."

It would have been a step in the right direction in the fight against global plastics pollution. Plastic is not only one of the main products made from fossil fuels such as oil and natural gas: It's also one of the most enduring. Plastic bottles, for example, can take up to 450 years  to break down. The resulting pieces of microplastics harm animals and humans alike — polluting oceans, soil and even the air. And the food and drink industry is one of the biggest plastics polluters in the world . 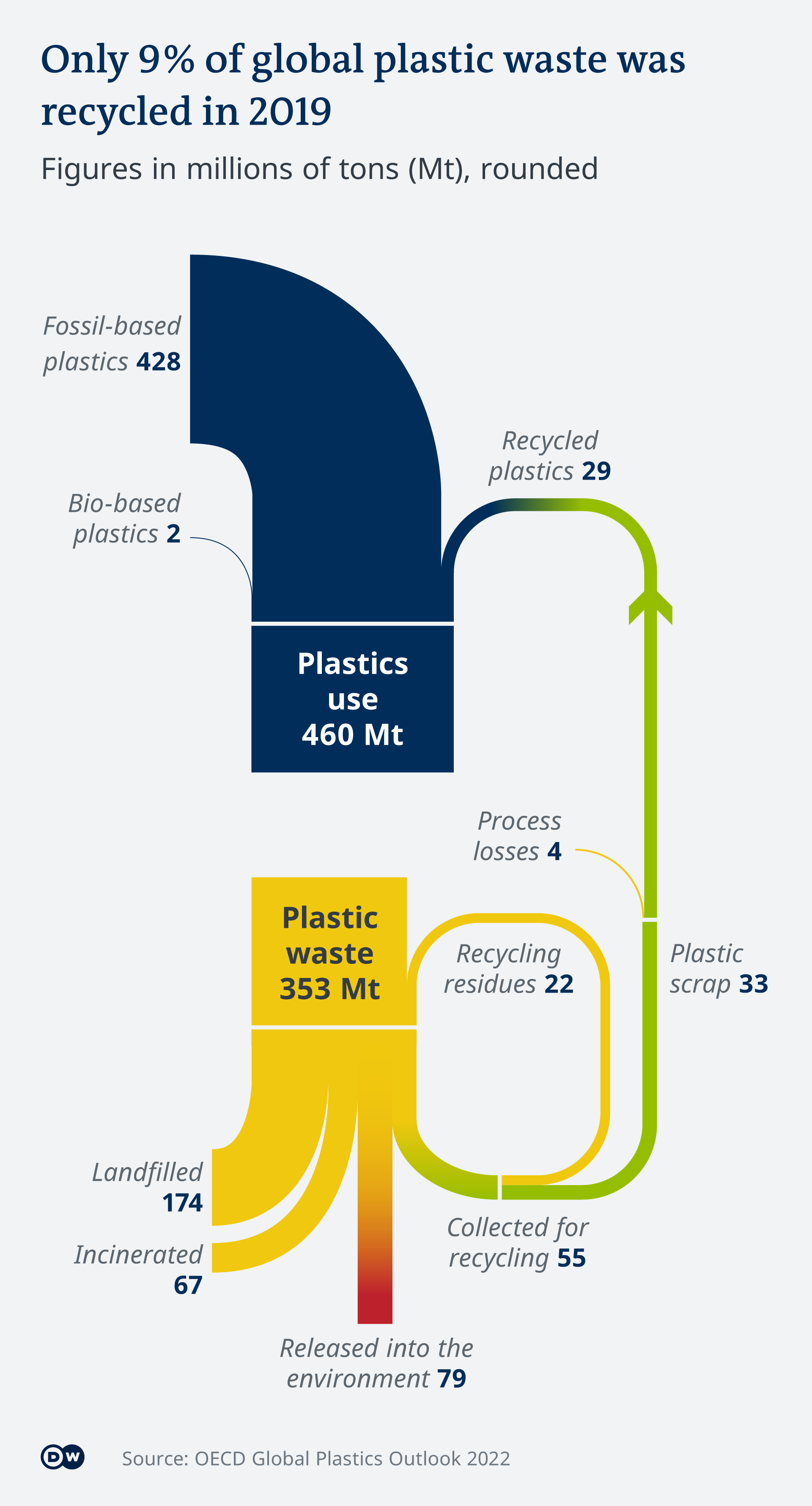 According to the Organization for Economic Cooperation and Development, 79 million tons of plastic waste were released into the environment through terrestrial or aquatic leakage, open-pit burning or dumpsites in 2019. That represents over one-fifth of the global total.

Have companies followed through on promises to clean up their act? DW and the European Data Journalism Network researched some of Europe's biggest food and drink companies to find out.

Danone, for one, did not. By 2014, the company's target on recycled plastics had shifted: "The goal is to achieve a rate of 25% of recycled PET by 2020", their website read . Developments in the larger recycling sector, some of which are out of companies’ control, also influence how much recycled PET can be integrated. But in 2020, Danone still used only 20% recycled PET in its water bottles worldwide. And, for 2025, 14 years after its first self-imposed deadline, Danone has set itself a new goal: 50% recycled plastics in water bottles. 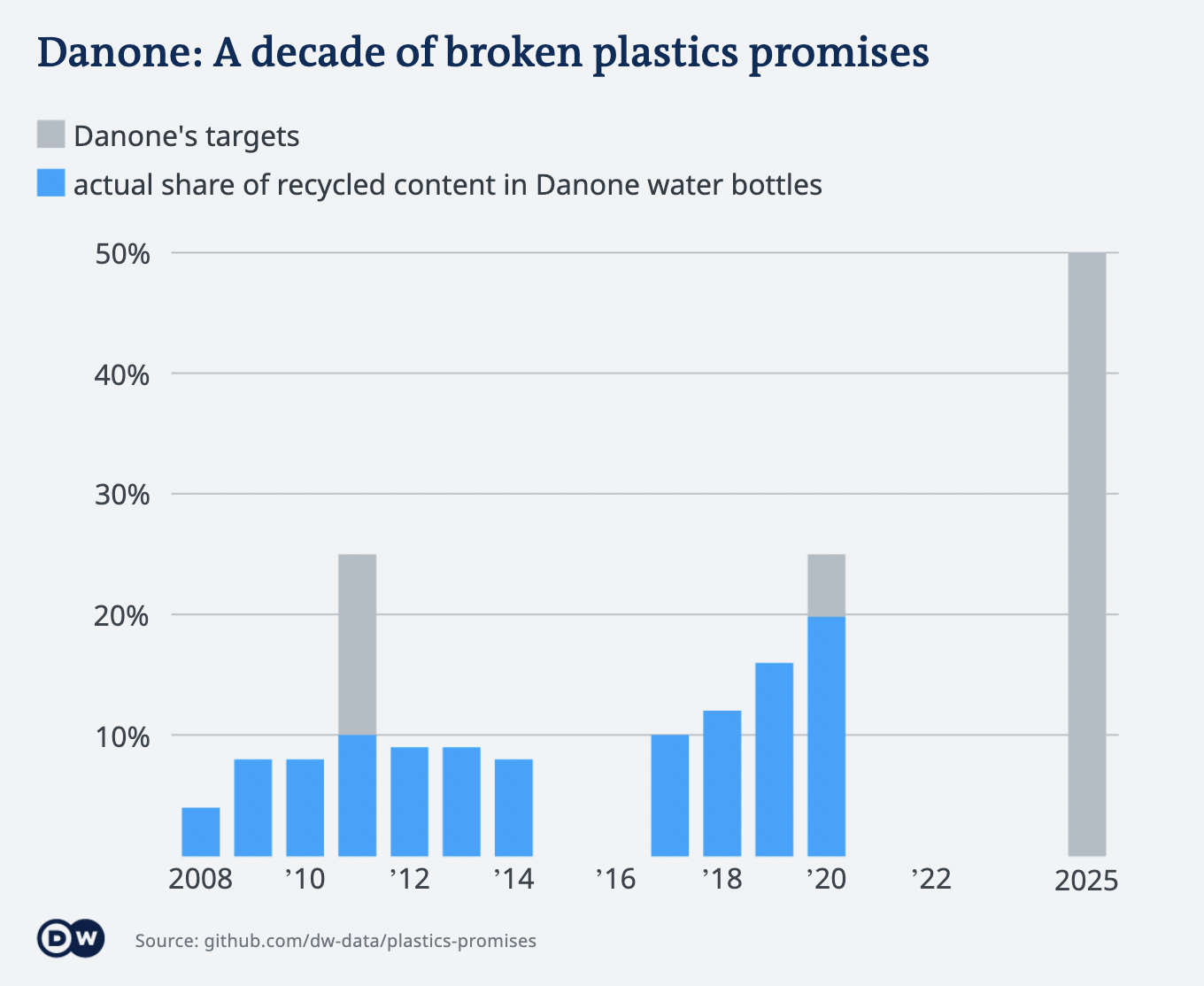 Note: Danone later revised its goal for 2020 to only apply to countries "where regulations allow" rPET, excluding China, Turkey and Iran from the calculations. Excluding those countries, the company achieved 25.5% rPET in their water bottles in 2020. This article reflects the original version of the pledge. Corrections from September 16: This article previously stated that, in 2008, Danone pledged to use 50% rPET in water bottles by 2009. Only after publication, Danone reached out to clarify that the 50% figure referred to a theoretical upper limit of rPET in bottles, not to a goal of actually achieving that share across all bottles by 2011. We have corrected this in the text and in the associated online database.

Danone did not respond to requests for comment on these discrepancies.

In total, DW and its partners identified 98 plastics commitments from 24 food and drink companies headquartered in Europe that were made during the past 20 years. More than half of these pledges were only made in the past few years, with most offering the stated aim of 2025.

In the case of 37 pledges that should have already been delivered on, the track record is not good: 68% either clearly failed or were never reported on again. When companies fail to meet their pledges, they usually don't mention this openly. Instead, they silently drop the goal or shift its scope or target year.

Where targets where not verifiable, DW contacted the company responsible and, where clarification was provided, updated the relevant data. If companies did not comment further on targets, they remained labeled as unclear. 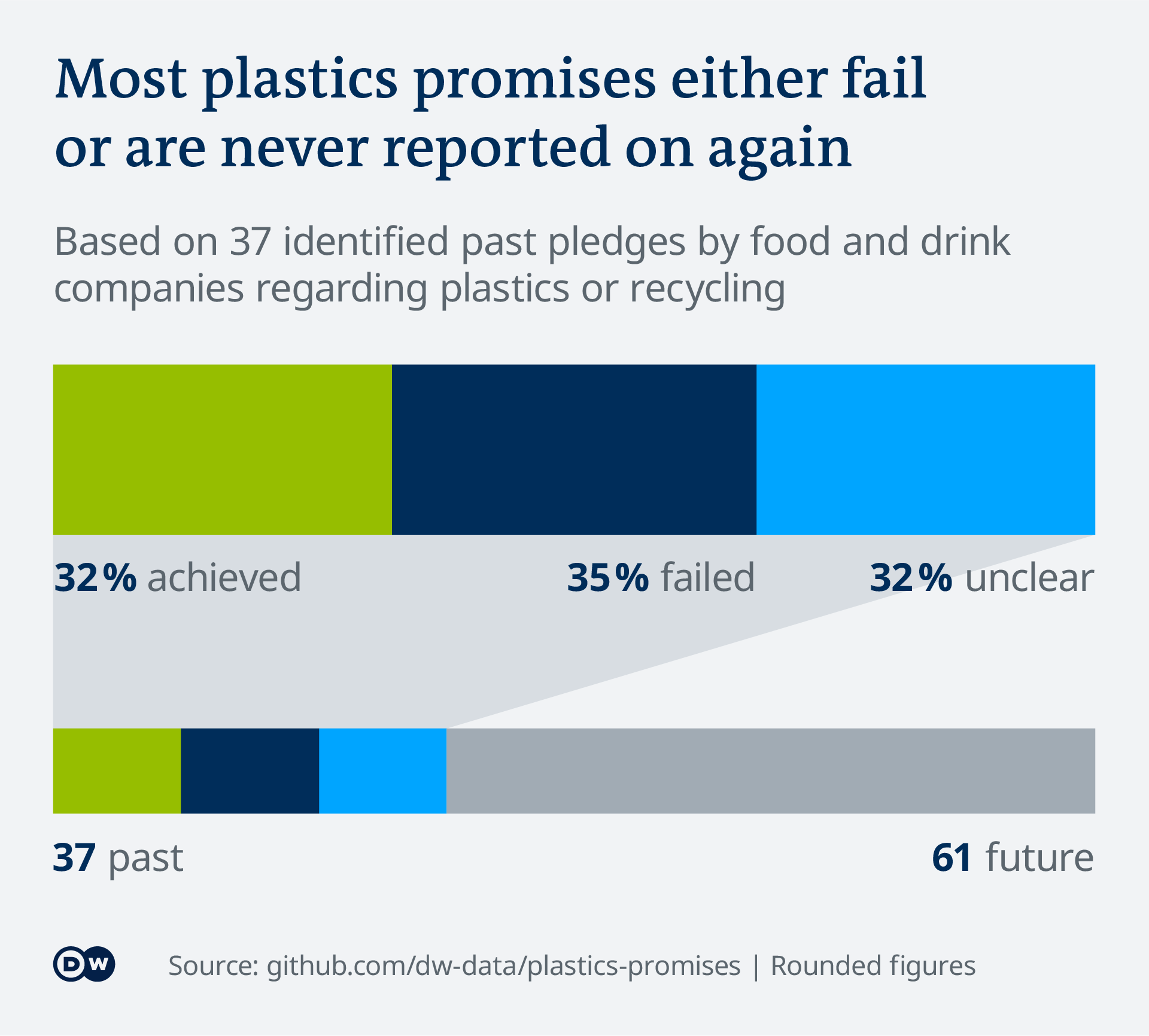 These figures are in line with studies for other industries: In 2021, the European Union investigated green claims on company websites  from sectors such as garments, cosmetics and household equipment and found that 42% of claims were likely exaggerated, false or misleading.

Of the goals that were supposedly achieved, some were more marketing ploys than long-term improvements. There is, for example, the Belgian brewery Anheuser-Busch InBev, the company behind such beers as the American Budweiser, Corona and Beck's. In 2017, AB InBev announced  that it had pledged to "protect 100 islands from marine plastics pollution by 2020."

In practice, the company did not engage in long-term protection. Instead, AB InBev organized 214 one-time beach cleanups in 13 countries, and then declared the efforts a success  one year ahead of schedule.

"A lot of companies use beach cleanups to promote themselves," said Larissa Copello, a policy campaigner with the environmental NGO Zero Waste Europe, based in Brussels. "But they are the ones that are putting all this waste at the beaches in the first place." Zero Waste Europe argues for "turning off the tap" to reduce packaging waste at the source.

Just 19 of the 98 pledges DW found offered pledges to reduce the amount of plastic used in packaging or the amount of virgin plastics — and most of those won't be delivered on until the future. 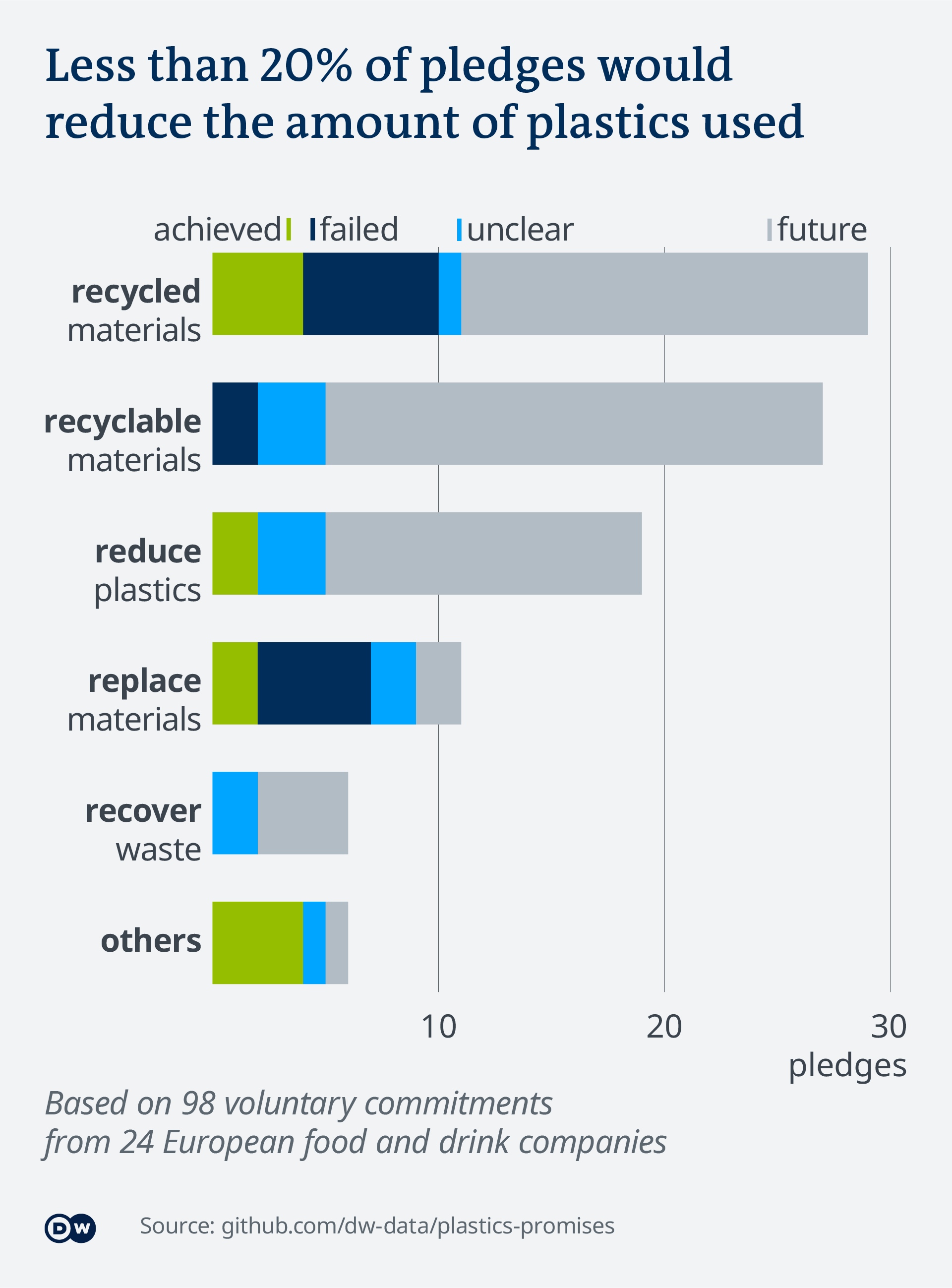 DW found commitments from 24 companies, 16 of which pledged to produce packaging with recyclable plastics. But that does not guarantee that the plastic will be recycled.

"If there is no infrastructure to collect these products separately, then they can't be recycled," Copello said. The same goes for supposedly degradable or compostable products. "At least here in Belgium, we don't have a separate collection for compostable or biodegradable items," Copello said. "They just end up in the mixed-waste bin." Plastic producers especially have long lobbied  against effective recycling systems.

In one-third of the documented pledges, companies committed to including more recycled plastics in their packaging. That would be an improvement, Copello said.

And some small steps have been made. Italy's Ferrero, for example, started increasing the amount of recycled PET used in secondary packaging back in 2010. The Swiss Coca-Cola bottling company Coca-Cola HBC launched a bottle made from 100% recycled PET for four of its water brands in 2019, after announcing it the year before.

Voluntary commitments are not enough for change

Overall, demand for recycled plastics remains low and prices high, meaning that it is mostly more profitable for companies to use freshly produced virgin plastics.

"Instead of using their power, money and resources to drive solutions, very often companies do the opposite," Urbancic said. "They are hiding behind voluntary commitments to not make the changes they would need to make."

In fact, she said, voluntary commitments are often a conscious tactic designed to delay and distract from progressive legislation.

Despite pressure from plastics producers, the European Union has recently passed ambitious plastics legislation. Under the Single Use Plastics directive, for example, disposable items such as plastic bags, cutlery and straws cannot be distributed within EU markets anymore. This follows the lead of African countries  such as Eritrea, which banned plastic bags in 2005, Rwanda (2008) and Morocco (2009).

The EU directive also includes a target of incorporating at least 25% recycled plastic into PET bottles by 2025 and 30% in all bottles by 2030. 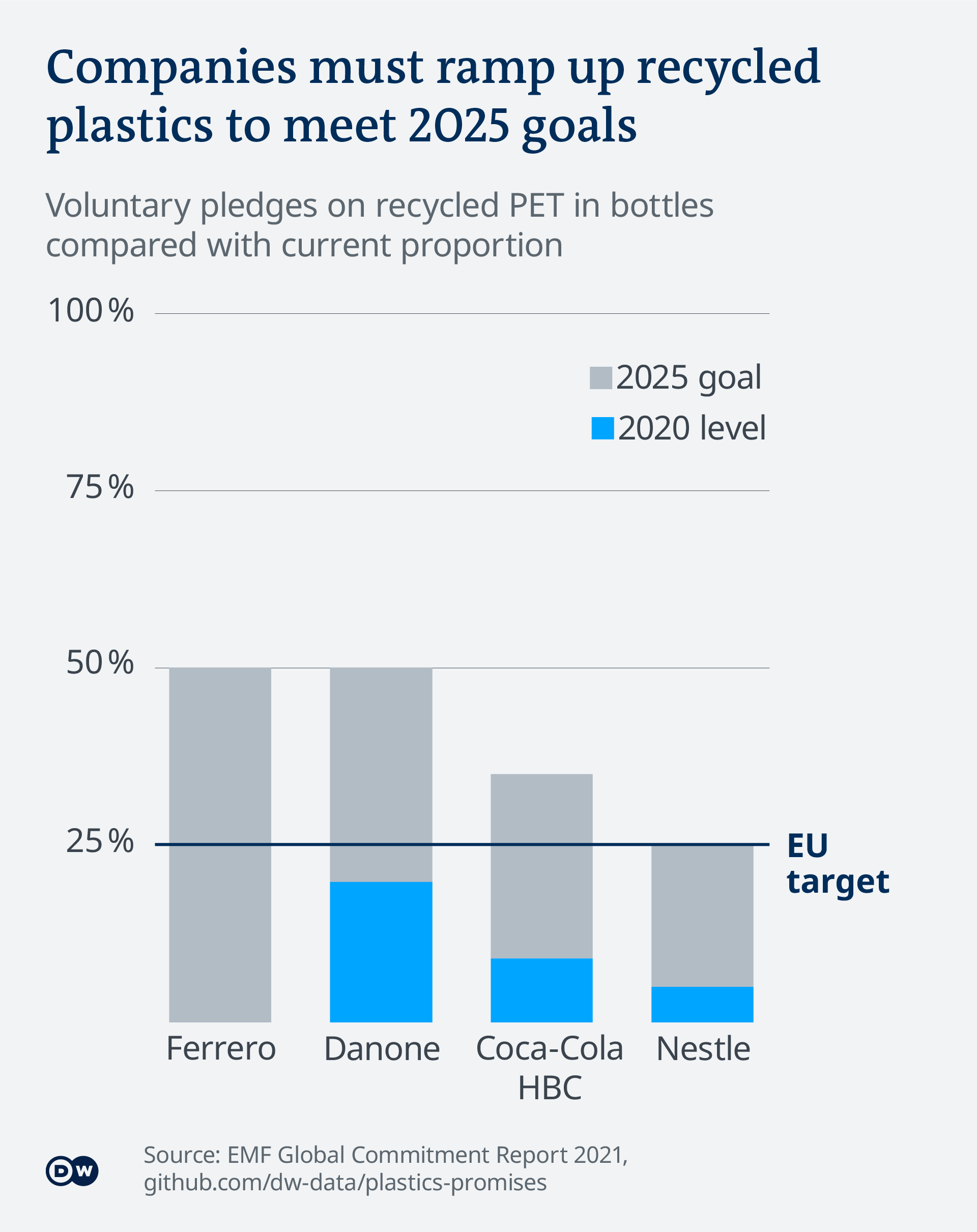 The new legislation is likely part of the reason for the rapid increase in plastics commitments. "It has made companies realize that they need to ramp up their efforts to meet those targets," Urbancic said. Now, she said, companies themselves are even calling for better recycling systems to help them meet their legal obligations.

Pledges made to the foundation vary widely in their ambition. Unilever, for example, has stated its aim as reducing the use of newly produced plastics by 50% from 2020 to 2025, but Ferrero pledged only 10%, and the French wine and spirits company Pernod Ricard has offered just a 5% reduction. 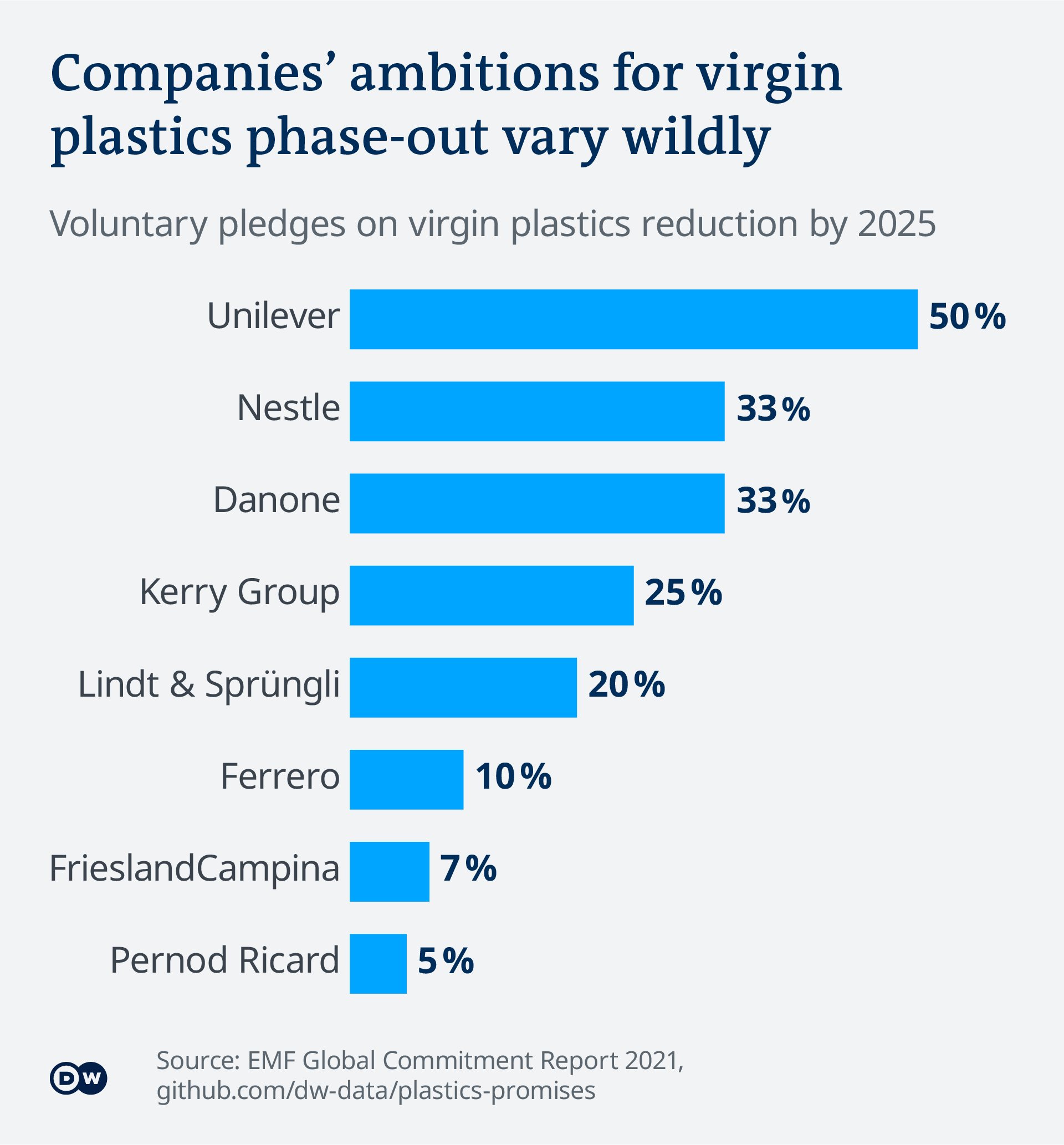 Zero Waste's Copello and Urbancic, of the Changing Markets Foundation, consider voluntary commitments such as those solicited by the Ellen MacArthur Foundation less effective than legislation. Urbancic called such strategies "all carrot, no stick."

"Companies are not obliged to even reveal basic information like their plastic footprints. And the data that gets published is not independently verified," Urbancic said. Like other voluntary schemes, she said, this runs the risk of being used as a smokescreen to facilitate greenwashing and delay actual change.

Slowing the rise of plastics production

Changing Markets recommends  that, at a minimum, voluntary initiatives set ambitious targets for participation, make sure members report their progress and hold companies publicly accountable for their performance.

In the next few years, the EU is planning to implement more thorough plastics legislation under the Circular Economy Action Plan , which will include targets for plastics recycling and measures to avoid packaging waste. And change is badly needed: Global plastics production is still growing and forecast to keep doing so in the next few decades. 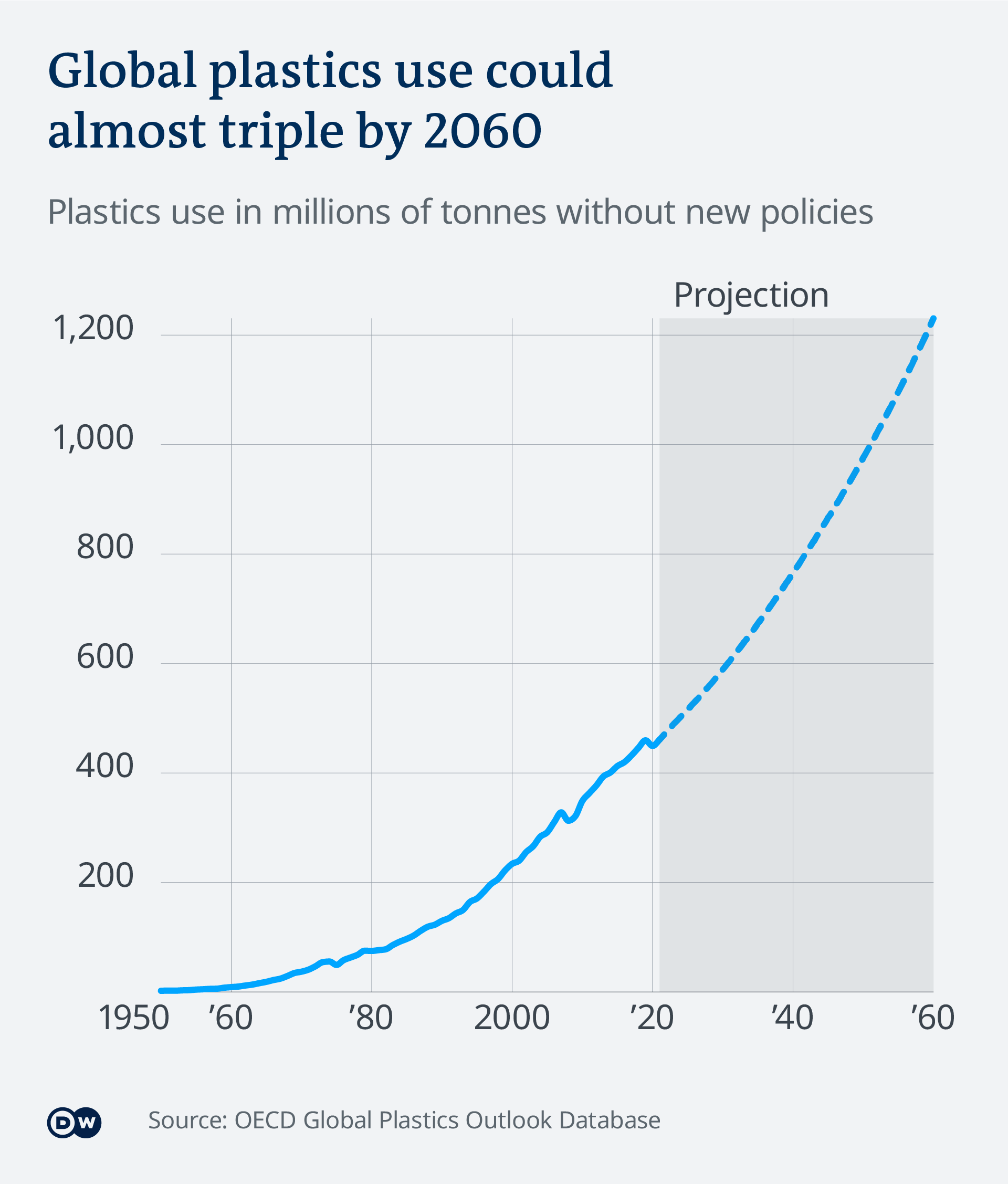 In order to even slow this increase, other countries would need to follow suit. The data show that companies only change their tactics when pressured through legislation, public accountability and consumer demand. The next litmus test will come in 2025, when companies will have to deliver on their current set of plastics promises. Some of those are now mandatory — at least within the EU.

The original article has been published by Deutsche Welle within the European Data Journalism Network.