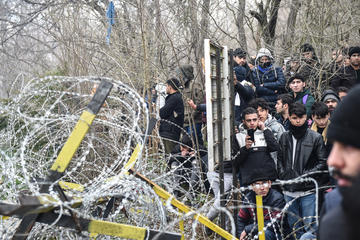 Migrants gather inside the buffer zone of the Turkey-Greece border, at Pazarkule, in Edirne district (© deepspace/Shutterstock)

The human rights situation at the border between Turkey and Greece where thousands of vulnerable men, women and children are trapped between borders without access to assistance or the possibility to seek international protection is an unprecedented humanitarian crisis. Urgent action is now needed to prevent the situation from getting even worse.

(Originally published by the weportal of the Council of Europe )

Everything must be done to de-escalate violence in the border region, including by ensuring that law enforcement authorities refrain from using excessive force.

All measures should be taken to assess the protection needs of those trapped, and to ensure access to asylum for those in need.

I call on Greece and Turkey, as well as all other member states involved, to ensure that humanitarian assistance is immediately provided to refugees, asylum seekers and migrants trapped at the border in order to alleviate the sufferings of human beings caught up in political turmoil.

Member states should refrain from any further action which leads to vulnerable people ending up in a humanitarian and human rights emergency. I am particularly concerned by the complete closure of border posts by Greece, which is being followed by other member states. I am also concerned about Turkey’s actions in the last days that have encouraged people to move to the border and have left them in this situation.

Regarding the situation in the Aegean Sea, I am alarmed by reports that some people in distress have not been rescued, while others have been pushed back or endangered. I recall that the protection of the lives of those in distress at sea is one of the most basic duties which must be upheld, and that collective expulsions constitute serious human rights violations.

I am also gravely concerned by reports of vigilantism on the Greek islands. The authorities have a clear duty to prevent violence and intimidation against refugees, asylum seekers and migrants. They also have the duty to ensure that NGOs and individuals are not prevented from providing assistance.

Member states must also ensure that journalists can cover the situation freely and safely.

Beyond the immediate measures that need to be taken as a matter of urgency, more structural action is necessary. Increasing border control cannot be the only response. Solidarity between member states is now more crucial than ever. This should focus on building further capacity to deal, in a fair and prompt manner, with asylum requests, but also with sharing responsibility for the reception of those in need of protection.

This should, firstly, extend to Turkey. Turkey is currently the country hosting the largest number of refugees worldwide and has been so for many years. Efforts to share responsibility with Turkey, especially in terms of ensuring that those who cannot be adequately protected there can be resettled, have been grossly inadequate. With up to a million more Syrians in a desperate humanitarian situation at Turkey’s border, a much more robust response is necessary.

Secondly, solidarity must be extended to Greece in order to decongest the Aegean islands, and to alleviate the pressure on the mainland where reception capacities are also limited. There is no more time for political wrangling over the relocation of a few dozen asylum seekers here and there. Talks need to be about very substantial numbers if the notions of solidarity and responsibility sharing are to have any meaning.

Over the years, refugees, asylum seekers and migrants have been used as pawns to achieve the domestic or geopolitical goals of all the states involved. This is antithetical to the idea of human rights and to the values that unite us. The response I see today threatens to upend the entire system of protection that Europe has painstakingly built up over many decades. It is not yet too late to reverse the current course of action and preserve dignity and humanity.