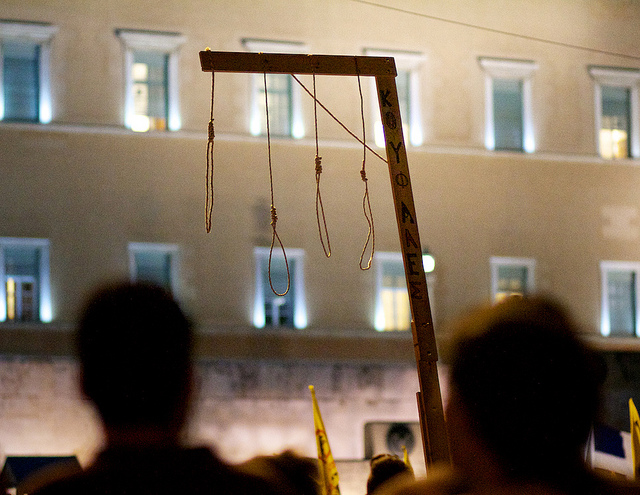 Athens adopts its 2013 Budget: new cuts to convince the “troika” UE-FMI-BCE to grant the last tranche of the loan-lifesaver. Around the country, however, there's an air of violent hostility, and to disturb the parliamentarians' sleep comes the sinister warning of Stathis Panagulis, the deputy and last scion of a dynasty of martyrs

“Pray that you will be judged by a special tribunal, colleagues who have just voted for the latest packet of sacrifices: I wish it for you from my heart, because otherwise you will meet the same end as the American Ambassador in Libya a few months ago.” That is to say, lynched by a furious Greek people.

Firing this sinister warning from the seat of the Parliament in Athens, on November 10th, was Stathis Panagulis, Deputy for the main opposition party, Syriza, while the windows were shaking from the slogans of the 100,000 demonstrators who had invaded the heart of the city against the adoption of new cuts in pensions, education and health.

This third blood-letting, demanded by the European Union and the International Monetary Fund before granting the last tranche of the massive loan to Greece, was confirmed two days later with the adoption of the State Budget by 167 of the 300 deputies. This was the only way Angela Merkel would free the payment of 31.3 billion euro for the second trimester of 2012 which the Greek government still awaits, but also (according to indiscretions in the German daily newspaper Bild, November 13th) the 5 billion and the 8.3 billion of the third and fourth trimesters.

The Eurogroup will not decide before the end of November the exact date on which the money will arrive in the sadly empty Hellenic coffers. The people's protest, in the meantime, does not look as if it will calm down. Public funds are not even available for heating the schools in freezing Florina, a town in the mountains of northern Greece already subjected to its first snowfall. The political scene meanwhile remains shaken by Panagulis' macabre warning about the risk of lynchings. So much so that Simos Kedikoglou, spokesman for the government coalition made up of Conservatives, Socialists and Dimar, a left wing party, immediately asked the reformist-extremists of Syriza to expel their deputy who, despite speaking in his personal capacity, “foments a climate of civil war”.

But who is Stathis Panagulis, the new Cassandra who troubles the sleep of the Greek deputies? Anyone who lived through the years of the Colonels' dictatorship well remembers that surname: Stathis is the last scion of a dynasty of martyrs.

His elder brother Ghiorgos, a lieutenant in the army, straight after the 21st April 1967 coup, refused to swear allegiance to the military regime. Dishonourably discharged in August 1967, he fled to Turkey vainly seeking political asylum at the Italian Embassy, then crossed Syria and Lebanon to get to Israel where he hoped to board ship for Italy. He was, instead, arrested by the Israeli police and handed over to the Greek authorities. But, once on board in Haifa, under an Israeli police escort, in November he disappeared, his body never found. Probably the agreement with Athens was to get rid of this troublesome lieutenant by killing him on board then dumping his body out to sea.

The most famous brother is nonetheless the middle one, Alekos. On 13th August 1968 Alekos Panagulis hid with a detonator in the rocks alongside the coast road to Varkiza, two kilometres outside Athens. He positioned the explosives which however did not go off at the right moment, as the limousine of the President of the military regime, Georgios Papadopoulos, passed.

It was not difficult to find and arrest him, but Alekos refused to reveal the names of his accomplices in the organisation “Greek Resistance” he founded, so he was tortured until the day of his trial, November 3rd 1968, when he was condemned to death. His defence in court made news around the world: “Clearly I accept the accusation. I have never rebutted it, not even under interrogation. I proudly repeat it: yes, I placed the explosives and I detonated the two land mines. With the aim of killing the one you call President. I am only sorry not to have succeeded.”

Oriana Fallaci tells this story in her book, “A Man”, dedicated to him. Many years later, in 1973, when finally Panagulis emerged from the prison-tomb two metres by three which he was locked up in and where he wrote his poetry (published in Italy with the title “I'm writing to you from a gaol in Greece”), she interviewed him, fell in love with him and became his companion.

In 1968, however, Fallaci had not yet arrived on the scene. It was due to pressure from the democratic community from Paris to New York that Alekos became recognised as a national hero, such that the regime was prevailed upon not to turn him into a martyr or shoot him. One year later, Alekos managed to escape but was recaptured. Mysteriously, one night his cell caught fire: the military wanted to finish him off, giving the blame to a cigarette, during the period when Alekos had started a hunger strike. The torture continued, with beatings and electric shock, until 1970 when a group of French intellectuals tried to have him freed, but, in lieu of Panagulis the regime freed another famous prisoner, the musician who had set his poems to music, Mikis Theodorakis.

Only during the dictators' final months in 1973, when the weakened junta was looking for international recognition, did Panagulis get out of prison thanks to an amnesty. The sight of him that day, emaciated, extremely pale, his hand over his eyes blinded by the sudden sunlight he had not seen for years, remains engraved in the memory of every Greek.

For a short spell Alekos took refuge in Florence in the home of Fallaci, whom he had met the day following his liberation. He had difficulty breathing because of his bones broken in the torture in prison. He then took part in the first free Greek elections after the demise of the dictatorship, July 24th 1974, becoming a deputy for the progressive Union of the centre, to continue from parliament his hunt for the politicians who had connived with the dictators. In particular he amassed evidence against the then Minister for the Defence, Evanghelos Averoff, now in the conservative government of Kostantinos Karamanlis.

This cost him his life: Alekos died before reaching 40 in a strange road accident on the night between April 30th and May 1st 1975, on the road leading from Athens to the suburb of Glyfada where he was born. The funeral on May 5th was a huge demonstration.

Let's go back to the younger brother, Stathis, today in Parliament as a Deputy with Syriza. He too spent some months in prison in the time of the Colonels. Then, during the 80s, he campaigned in favour of the Pasok founded by Andreas Papandreu, but left almost immediately to set up a movement of his own further to the left. Altogether a life in opposition, still today, when the economic crisis grips Greece.

His words against those who voted for yet another packet of sacrifices imposed by the troika did not pass unobserved: the name Panagulis is still a symbol. “Panagulis Zei”, (“Panagulis lives”) was an antifascist slogan shouted by generations of demonstrators on the streets of Greece.