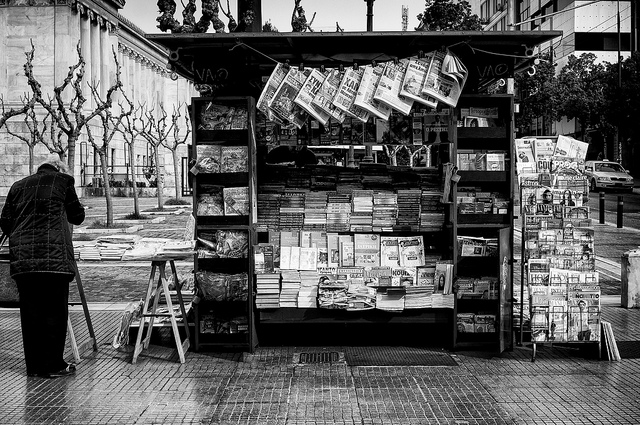 A job listing recently posted to a well-known classified ad site highlights the dismal level to which the job market for journalists has plummeted in Greece. The ad is seeking a 'writer' who will post 100 articles a day to a website for the princely sum of 100 euros a month

The ad which can be found here (in Greek), is posted in the category of ‘journalism’ and states that it is seeking a ‘writer’. The term is used very generously however as the person who will fill the position is unlikely to need more than two keyboard commands: CTRL+C and CTRL+V.

The ad states: "WRITER [wanted] for about 100 copy-paste general content articles daily. They will be copy-pasted from sources that will be given but are not obligatory, of importance is the critical thought of the writer to choose articles which are effective […] Additionally the writer must have good knowledge of facebook as we want to post about 35-40 general content photographs as well as sports content (mainly Olympiakos) on our facebook page in order to inform its audience […] Pay 100 euros, negotiable."

The advert is a stark indication of how the job market for journalists has effectively collapsed thanks both to the six year recession in Greece and related austerity driven policies. According to the Panhellenic Federation of Journalist Unions (POESY) the unemployment rate for journalists now stands at close to 40% following years of newspaper and broadcaster closures and cutbacks.

These of course include the sudden and unprecedented closure of the public broadcaster ERT by the government in June 2013 which resulted in job losses for all of the 2,690 journalists and technical staff employed by the broadcaster. Since then only 430 people have been hired by the new public broadcaster NERIT created to replace the shuttered ERT. Meanwhile unemployment benefits have since expired for those who remain jobless, who also claim to have been denied fair severance compensation which is the subject of an ongoing legal battle.

With such a large available pool of highly qualified journalists compared to so few jobs, those offering them are in a position to dictate terms for employment that only a few years ago would have seemed unthinkable.

Journalists are by no means the only workers currently suffering in Greece. However aside from the personal problems faced by many such professionals due to long-term unemployment, the dire state of the industry has troubling consequences for freedom of information and democracy in Greece.

Democracy requires a well informed public, which in turn requires good journalism. That means journalists must have adequate resources to investigate stories properly and not just repeat press releases or ‘copy-paste’ articles from other sites. The ‘churnalism’ phenomenon is clearly on the rise in Greece with the number of supposed ‘news sites’ growing, while the number of people actually doing frontline reporting continues to shrink. An echo chamber does not equal a multitude of voices.

Furthermore the current situation plays into the hands of the few media barons who have long wielded a disproportionate amount of media power in Greece, controlling the majority of the major newspapers and broadcasters (examined here in a special report by Reuters ). For the journalists that remain employed the dire job market renders them less willing to take risks and report on stories that may run counter to the economic interests of the owner of a particular media group. That was one of the main reasons (together with the ERT closure) that recently Greece suffered the biggest drop in press freedom than any other country worldwide according to the US NGO, Freedom House.