Illegality is in the eye of the beholder 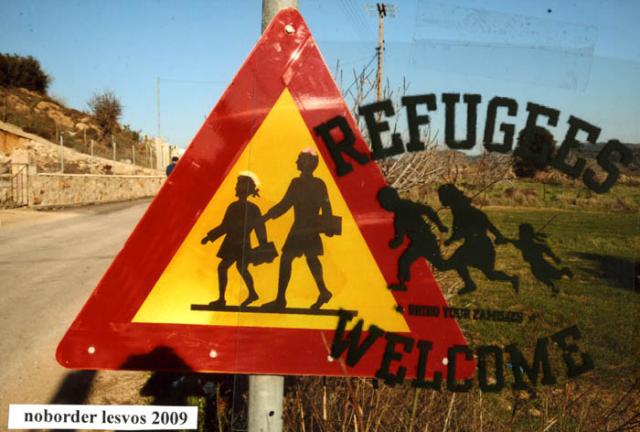 Woodstock meets No Global in a week of activism and debates at the No Border camp on the island of Lesvos, first step of many migrants' journey to Europe. A reportage

'Freedom of movement,' 'no borders,' 'no nations,' 'fight Fortress Europe,' 'make borders history' - these are just some of the no-border movement's popular slogans which accompany political and dynamic protests. However, coming from Italy at a time when being clandestine has just become a crime, the notion that "no one is illegal" felt the most radical, most meaningful, and most touching. This is the concept that came to inform my understanding of and participation in the "No Border Camp" which took place in Lesvos from 25-31 August, with the aim of supporting the migrant journey to Europe by way of political pressure towards local authorities, legal assistance, and welfare provision.

The island of Lesvos, facing Turkey at the Eastern end of the Greek archipelago, is the first step for many migrants on their journey to Europe. Boats from the Turkish coast arrive by night in order to avoid Frontex ships and the coast guards of both countries. Once the migrants land, their next goal is to get to Athens - although many believe they are already there or have no idea where they are at all. Their first encounter may involve one of the local groups of the area that will try to help them, seemingly trustworthy middlemen from their countries of origin willing to sell them tickets to Athens for 150 Euros (when such tickets can be purchased on the ship for 29), or the institution called "Welcome Centre" in Pagani in the immediate outskirts of island's main town, Mytilini.

Pagani's "Welcome Centre" is, in fact, a jail where refugees are detained in disorganised conditions with a level of hygiene well below basic human rights standards, as stated by several institutional inspections, including UNHCR's. They do not receive any information about what is going to happen to them. Although people should only be detained for a few days for identification purposes and in order to receive the "white papers" allowing them to proceed on their journey (by leaving Greece within 30 days), many are kept in the "cages" of the detention centre for much longer periods - up to months - with easily imaginable consequences in terms of health and welfare. As a patent symbol of the inhumane conditions forced upon migrants by the border policing system, Pagani was one of the three core locations of the activist activities during the week. The other two locations were an info-point in downtown Mytilini and an actual camping site in the village of Charamida.

'Wash your hands at all times (camp flu is around),' 'beware of fires,' 'no pictures,' 'read the guidelines in case you are arrested' - these messages made for an encouraging welcome when arriving to the camp's headquarters, located in a free, self-managed, and self-financed camping area in Charamida, a small beach south of Mytilini. In fact, the overall atmosphere amusingly combined law and order with hippy and queer twists. The camp was run in an orderly way by a considerable number of working groups, responsible for anything from planning actions, dealing with logistics, and managing legal issues to feeding "brothers", "sisters", and "comrades" rigorously vegan food at the appropriate times. In addition, as read the camp's "how to" manual, an awareness group was there to address any racist, sexist, or homophobic attitude and even the camp-ground was complete with a "queer area" designed to "provide a space for those who cannot imagine camping in a classical hetero-normative way." And, indeed, organisers and workshop facilitators - demographics-wise mostly German and mostly women - did do a great job of creating an inclusive atmosphere for all participants, including migrants themselves, as well as managing debates and clashes during discussions.

Charamida was somehow the intimate core of the activist week, the place for preparatory meetings and workshops, self-reflective soul searching to debate motives and priorities, and sharing everyday life with migrant individuals and families - bringing shoes to make their journey easier was actually the admission ticket to the camp itself. However, much effort was also devoted to raising public awareness and involving the local population in the struggle for migrants' rights - this task was fulfilled by the permanent information point located in downtown Mytilini where campaigns and symbolic actions took place.

The information point near the harbour in Mytilini started out as place to both raise awareness among the local population and provide arriving refugees with basic information and assistance. Day after day, it became an actual welcome centre for migrants to sleep and gather, with refugees themselves gradually taking up an active role in supporting the new arrivals. On Friday the 28th in the afternoon, a farewell parade took place to say goodbye to the refugees who had spent the last few days with the activists in the camp and in Mytilini and were then leaving for Athens. This moment created a small spontaneous demonstration which prompted support and empathy from the local population as well.

The detention centre was the focus of the most confrontational actions since the main goal of the demonstrations was its very closure. On Friday, August 28th, a demonstration was mobilised to demand the immediate release of all prisoners, the closure of the detention centre, and the abolition of detention altogether. The following day, after an unsuccessful attempt to squat the Prefecture, a negotiation team with lawyers and other delegates met with the Prefect of Lesvos, the Chief of the North Aegean Police, and a UNHCR representative. Negotiations resulted in the release of 23 detained families (women with children and - after especially hard negotiations - their husbands) and approximately 100 refugees who had already been issued their 'white papers'. Families were moved to a new, non-detention refugee centre which was opened near Mytilini airport, whereas the individual men were released to the harbour. This was an important step that showed the feasibility of activist efforts and their potential to achieve at least some results with local authorities. Even more significant was the moment when 22 refugees from Afghanistan were able to obtain their papers and continue on with their journey without detention at all. The significance of this achievement lay in the fact that the standard procedure of unconditionally detaining all refugees was broken, thus setting an important precedent.

Indeed, although addressing Pagani's living conditions and demanding its closure was the most urgent goal, the pressure of local and international activist groups continues to focus on the general problem of detention itself rather than detention conditions in Greece. Merely calling for the closure of one detention centre following a human rights-inspired discourse, it has been argued, may simply lead to a modernisation of detention facilities without questioning the institution of detention itself in Greece, in Europe, and worldwide. The camp's core political statement, instead, points to the fact that nobody should be detained - and thus punished - for the mere fact that they are migrating. In this framework, obtaining the non-detention of some migrants - though seemingly the proverbial drop of water in the bucket - did show that, even under current Greek law, it is possible to follow a different policy that opts not to detain people for the mere fact that they are migrants. The general demand for "freedom of movement" has thus been translated into a concrete achievement, a positive local development, and an effective act of solidarity.