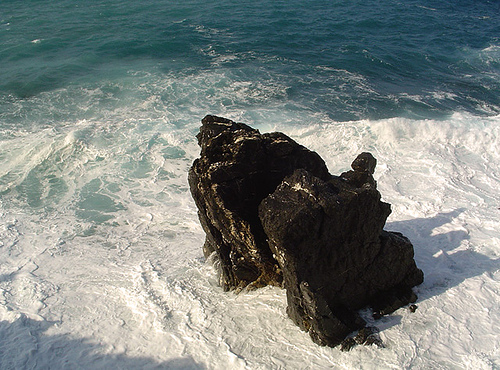 Two thousand years ago, pirates held Julius Caesar captive on Farmakonisi, a big rock in the middle of the Aegean Sea. Today migrants land on the small, uninhabited island before transfer to the crowded Greek detention centres

Julius Caesar, the future emperor, spent 38 days in captivity of pirates here, on Farmakonisi, an unpopulated island of the Greek Dodecanese, eight nautical miles from the Anatolian coast. The pirates had captured his boat and taken it to their hideout.

Was the 27 year-old Julius scared? Not in the least. He forced his prison guards to listen to him reciting poetry. This was 74 years B.C. and Caesar found himself in the eastern Mediterranean for love, after having refused to repudiate the beautiful Cornelia, daughter of Cinna, one of the leaders of the party opposed to Silla, the tyrant who in those days had Rome under his feet. Disobeying orders meant the promising official was threatened with the death penalty and confiscation of his wife's fortune; Caesar's friends intervened to change this punishment to exile in the Orient.

Far away from Rome, he found himself face to face with the maritime muggers who had ruled the Aegean Sea for centuries. Plutarch, in his "Life of Caesar", describes how the pirates demanded "We want twenty talents to set you free." Scornful of such a miserable amount, because the pirates did not know the noble heir that had fallen in their hands, Caesar promised them double. Nevertheless, once freed, he would avenge himself by renting a fleet from the nearby city of Miles, in order to hunt them down and crucify them one by one. But while he was waiting for his faithful servants to gather the ransom, he decided to enjoy his captivity in a beautiful wild environment: how not to feel inspired to recite theatre monologues on such a stage of waves and winds, against a background of two watchtowers which even today dominate the island? Caesar must have seen them too, as the towers were already there for 300 years before his arrival.

More than two thousand years have passed. There are no more pirates on Farmakonisi. The most that can be seen are a few sheep among the remains of early Christian mosaics near the pier, or some tourists arriving from Leros for a daytrip.

Farmakonisi's last resident, Christos Manoliodis, died in 1966. However, for the past few years, Farmakonisi and the nearby Agathonisi Island shelter the new victims of the modern maritime criminals: the migrants taken there by the human traffickers, the pirates of the twenty-first century.

On Agathonisi, an island with 112 residents, two teachers for four pupils, and one active port, more than 2,000 political asylum seekers have landed since January 2009. Many arrive from the small adjacent Greek islands such as Farmakonisi and Imia. Since the Turkish government also claims these rocks, these islands are famous for the long-lasting allegations, especially intense in recent years, of Turkish air force violations of Greek air space. Around 2,500 migrants have arrived in 2008. The human trafficking business has been constantly growing. According to government figures, around 140,000 "arrivals" have been registered in all of Greece in 2008.

People arriving on Agathonisi come primarily from sub-Saharan Africa and Asia, in an odyssey that takes them through deserts and the vast steppes along the Turkish coast. From this point, getting on a boat and passing eight miles is easy, compared to the much longer and much more dangerous maritime route that other migrants take to go from Libya to Italy's Lampedusa island. If fishermen or Greek military patrols spot them, they slash a hole in the rubber boat and have to be rescued as shipwreck survivors according to maritime law. Almost no one ever drowns in such a short journey. Before landing as a modern Ulysses or being fished out by some boat, these would-be EU residents throw their documents into the sea and declare to be from a country in war, in order to claim political asylum.

The mayor of Agathonisi, Veggelis Kottoros, stated to the Athens daily, Kathimerini, "Given that they come anyway, we could take a boat and transport them ourselves from Turkey to here, and collect the 1,000 Euro per person that the human traffickers and their bosses ask of these poor people." The mayor also commented: "The only thing we ask is that they take them as soon as possible to the modern migrant detention centre in Samo. We are not racists, but we insist on being a tourist paradise. For this reason, we staged a protest against the government, which has been doing very little to resolve this problem."

In Agathonisi's coffee bars, however, the waiters are often young, underpaid Afghans.

At a summit in Brussels at the end of June, Prime Minister Kostas Karamanlis pointed a finger at Ankara for being indifferent and closing its eyes before the caravans of illegal migrants crossing its territory to the Anatolian coast and attempting to reach Greece. They have found this to be a faster route for entering Euroland. "The Greek position has been absolutely welcomed by the other Member States," said the Greek Prime Minister, "They agree with us on the need to sensitise and pressure Turkey, which is an EU candidate country, on the issue of illegal migration."

From these small islands, the migrants are transported to the larger ones of Samo and Chio, also in the Dodecanese, which host two of the many detention centres for illegal migrants. The other centres are dispersed all over Greece, but are primarily concentrated on Lesbos, an island in the northeastern Aegean, also near Turkey. In 2008, 12,000 illegal migrants transited through Lesbos from Somalia, Afghanistan, Iran, Palestine and other countries from where the only chance for survival is escaping. The other centres are located in the area of the land border between Greece and Turkey, along the Evros river in the Thrace region, or in Athens and Patras, another attractive destination for migrants who do not want to stay in Greece but seek to hide in a truck on a ferry going to Italy, and from there reach France, Germany, or England. In Patras, a "city within the city" has thousands of migrants herded in cabins outside police control. In the past, they were primarily Kurds; currently, they are mostly Afghans.

According to a recent report by the Greek branch of Doctors Without Borders, the living conditions in the detention centres are inhuman: people sleep in crowded cells with no hot water and access to medical assistance, not even for the women and the children. According to the Communist daily Rizospastis, whose journalists visited the detention center in Elliniko in the suburbs of Athens, more than 100 refugees were enclosed in 7 cells. "Unless they get up on their feet, they would not fit in!" By the end of 2009, the opening of another three centres is planned: one on Aspropyrgos, near Athens; one on Ritsona, on the island of Eubea; and one more in the "boiling" area along the Evros River. According to Doctors Without Borders, while the trafficking in human beings from the coasts of the Third World towards Italy and Spain is declining, the one from Anatolia to Greece is booming.

According to Greek law, once a migrant is arrested without documents, the police can detain him or her up to three months in one of the centres, if they deem the person to be a threat to public order. Alternatively, once issued his or her deportation orders, the person has 30 days to leave the country and return to his or her homeland; something which, as in Italy, never happens. The political asylum status has been accorded to only 8 persons out of the 25,000 which requested it in 2007.

Many migrants dream of entering Greece, only to scatter all over Europe. Others remain in Greece. This results in "fights of the poor" between the newly arrived and the migrants of the older generation, which actually benefits employers, who in the best of cases are farmers, families needing a nanny, or construction companies, and in the worst case, members of organized crime.

A European Parliament mission considered the local detention centre in Samo a "model centre" compared to other centres in Greece, Lampedusa in Italy and Ceuta in the Spanish enclave in Morocco. However, the guards allow local farmers to recruit for a day of work the "guests" at the centre, under the condition they bring them back by night. Migrants are paid 15 Euros a day for picking olives, compared to the 50-60 Euros a day paid to the "old" migrants from Albania who had arrived here in the 90s.