Welcome to ‘hell’: working on a Georgian railway construction site 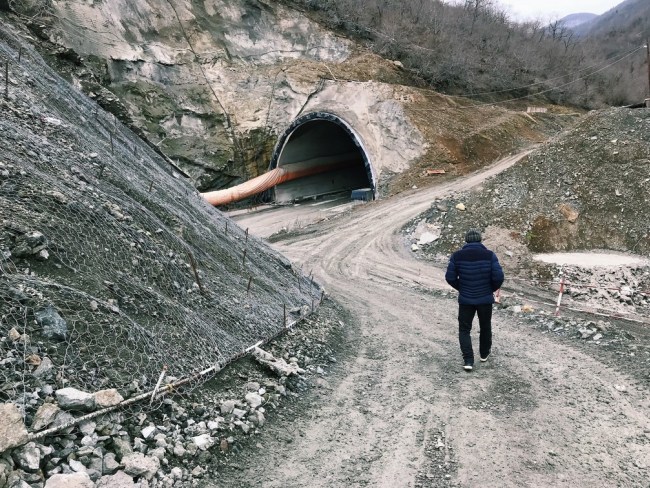 Railway construction in central Georgia is a key part of ambitious plans to modernise Georgia’s infrastructure. Despite warnings from trade unions and official inspectors, life for the workers remains a ‘living hell’

On a murky mid-January day, Tevdore Natsabidze, 58, walks through a narrow, muddy village road leading to the construction site where he works as a labourer. He lives in the village of Nebodziri in central Georgia’s Kharagauli Municipality, 160 km west of Tbilisi. He is currently employed on the construction of a railway tunnel in Bezhatubani, a neighbouring village.

‘Almost no cars pass here. Well, sometimes lorries give me a lift, but I’m used to walking. Keeps me in shape’, he says, walking up the hill before crossing a 19-century railway bridge.

‘You have to be careful in here. Many have been hit by a train just because they were not cautious’, Tevdore warns, walking down the railway line leading to the construction site. As he approaches the railway stop in Bezhatubani, a construction site comes into view below. From there, the only way to the site is a narrow footpath leading down the hill.

As Tevdore reaches the site, he is met by at least twenty other men, impatiently waiting for a train to take them to the company’s headquarters in the nearby town of Khashuri. They are going to discuss the demands of the strikers with the company’s administration. Several others join shortly.

‘Every project serves the well-being of our citizens’ 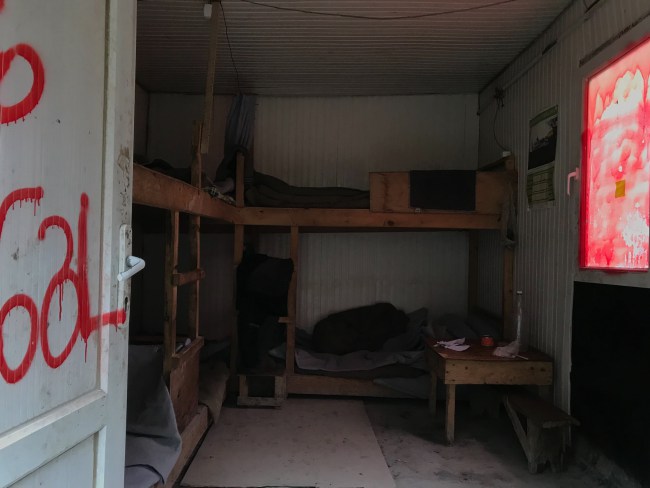 The construction site Tevdore is working on is part of a project to modernise Georgia’s main east-west railway line, from Tbilisi to Batumi. The main construction work is being carried out on the Zestaponi–Kharagauli and Moliti–Kvishkheti sections of the railway. The cost of the project is 260 million Swiss francs ($278 million).

The new line will replace the existing Zestaponi–Kharagauli railway, adding an additional line connecting the villages of Moliti and Kvishkheti. The project will add six new tunnels to the railway, five of which have already been constructed, the state-owned Georgian Railway Company told OC Media.

Georgian Prime Minister Giorgi Kvirikashvili said last year that the railroad modernisation project is part of the ‘most extensive component of the government’s four-point reform agenda’. This, he said, would include ‘brand new infrastructure meeting modern standards, with its up-to-date railroad stations, ports and airports, and tourism infrastructure’.

The PM emphasised that ‘every investment, every project serves the well-being of our citizens’. However, the workers constructing the railway have long been raising the alarm over their own well-being, complaining of dangerous working conditions.

‘This is not the first time we have gone on strike’, Giorgi Kiknadze, the group’s de facto leader, a trade unionist, says. He claims that although the company has promised to ‘make things better’, and despite some steps being taken, overall conditions on the site are ‘unbearable’.

After taking a 30-minute train ride from Bezhatubani to Khashuri, the striking workers meet Ilia Lezhava and Paata Ninua, deputy heads of the New Trade Unions (NTU), a trade union of railway workers established in 2015.

While almost 40 men wait in the courtyard of the company HQ, the trade unions reach an agreement with the administration. Everyone is promised reimbursement for sick leave and holiday time; the strike is over.

But the announcement comes with sad news — some 26 workers are ‘no longer necessary’, as the tunnel and railway construction will soon finish. Only a handful who are needed for the rest of the work will keep their jobs.

Not everyone is satisfied with the decision to end the strike. Many of the workers doubt the company will address serious concerns over their safety. ‘This is what experience has taught us’, Kiknadze says.

According to one worker, 44-year-old Arsen Latsabidze, power cables are left exposed in the dark tunnel during construction. ‘These cables are often left in puddles inside the tunnel’, he adds.

Besides failing to ensure their safety and refusing to pay for sick leave and time off, workers claim the company has ignored a number of issues they have previously discussed. According to spadesman Jaba Peradze, 40, the company often fails to provide enough gloves, forcing them to use worn-out ones.

‘They only provide two pairs of boots a month, which keeping in mind the intensity of the work and the routine, is not enough. The boots also do not have steel caps, which should protect your toes’, he complains.

The workers say their drinking water becomes polluted every time it rains. ‘When we asked the administration for potable water, they told us to drink the tap water, which basically comes straight from the River Tskhenistskali’, Peradze says.

The toilets and showers on the site do not meet even basic hygiene standards. Of more than ten faucets in the communal, undivided showers, only three are in order. The changing room is dirty, and workers are expected to clean it in their free time.

‘Working here is a blessing and a curse’, Kiknadze says. He says there are almost no jobs in the municipality and nearby towns, or even in Tbilisi. ‘We are working here and at least earn an average monthly income of around ₾600–₾800 ($240–$320), but at what cost? You don’t know what’s going to happen to you’.

Just three days after the agreement to end the strike was reached, three workers were injured in an explosion in the tunnel. The explosion was planned as part of the construction, but several workers near where explosives were planted were not warned before they were detonated. A criminal investigation has been launched for ‘violations of health and safety rules’.

The 22 January accident was not the first to injure workers on sites operated by China Railway 23rd Bureau Group . In July 2017, two workers were injured on the same site in Bezhatubani after a small rock fell into the tunnel. The company denied any wrongdoing, claiming that ‘during construction, labour safety rules strictly complied with standards’, adding that the workers ‘were provided with appropriate equipment’.

‘Workers get injured from time to time, but nobody in the administration takes any precautions’, Kiknadze says.

China Railway 23 has previously been accused of poor labour conditions and labour safety. Monitoring from the New Trade Unions (NTU) in April 2017 showed similar conditions at sites in the neighbouring villages of Zvare and Dzirula. 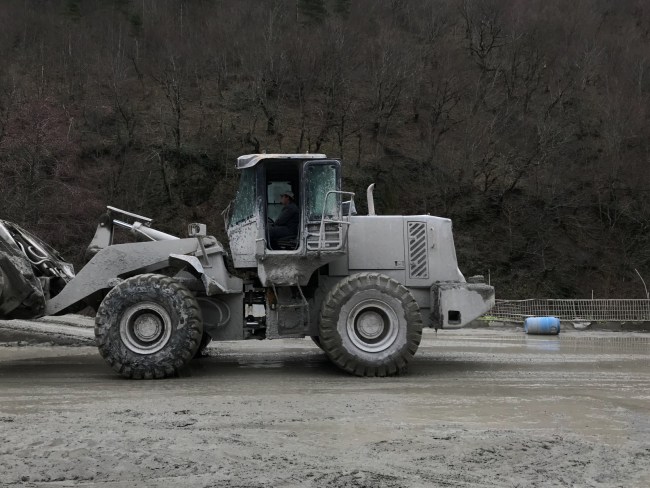 In August 2016, Georgia’s Public Defender’s Office issued a statement regarding construction in Zvare, saying that employees had complained of a lack of ‘appropriate working conditions, safe working environment, and hygiene standards’. It also mentioned that workers ‘were not familiar with the terms of their labour contract’.

According to the NTU’s April 2017 monitoring, the company’s administration had addressed only a handful of problems on the site — giving respiratory masks to workers and attaching some cables to the wall. However, it said that the majority of problems remained. According to them, inadequate precautions were being taken in storing explosives, which were kept in the vehicles used for transporting them. Among others, it also pointed out to the lack of first aid kits or proper safety equipment.

Monitoring conducted by the NTU once again, in August 2017, found that the company had breached a 2014 decree by the Georgian government, as they had failed to provide proper ventilation in the tunnel, making it difficult for workers to breathe.

The conclusions from each monitoring were sent to the company’s administration, according to the NTU.

An investigation into the 22 January accident by the Labour Inspection Department is still underway, the Ministry of Health and Labour told OC Media. According to them, inspectors from the department have visited the site twice to determine the cause of the incident.

The ministry said that the Labour Inspection Department had inspected the construction sites in Zvare and Bezhatubani three times since 2016, revealing almost 30 violations. ‘The relevant written recommendations were issued’, the ministry told OC Media.

However, recommendations from labour inspections, in addition to monitoring from the trade unions, are not legally binding. In order to change this, labour rights groups have been campaigning to change legislation and expand the mandate of labour inspectors.

Lina Ghvinianidze, the head of Tbilisi-based rights group the Human Rights Education and Monitoring Centre (EMC), argues the current model of labour inspection, which was adopted in 2015, ‘cannot be effective’ as it only issues recommendations, and ‘depends on the goodwill of employers to allow labour inspectors on the workplace’.

Ghvinianidze says the construction sites near Kharagauli are an example of how ineffective the current legislation is, adding that despite a number of recommendations being issued to the company, ‘workers have to continue working in severe conditions, risking their lives and health’.

According to data provided to OC Media by the Ministry of Internal Affairs, 359 workers have been killed and 984 injured in occupational accidents in 2010–2017.

Labour rights advocates, including EMC, trade unions, and others, have put their faith in a bill to reform not only the Labour Inspection Department, but the country’s labour laws at large. They say this could be a step forward in combating the high number of fatal workplace accidents.

Georgian Railway told OC Media they are not responsible for labour conditions on railway construction sites, adding that their concern is the quality of the project.