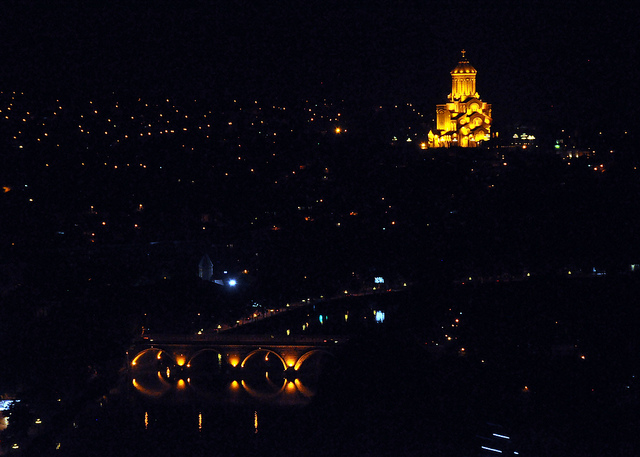 Georgia has embraced the idea of open data as a vital component of open government. Critics, however, say data usability is still out of reach. A vital civil society sector could make the difference

On a grey Wednesday afternoon in January, government officials and civil society activists traded glances across the boardroom in Tbilisi’s Sheraton hotel, a flat, tan, oddly-shaped building that pays tribute to the architects’ bizarre sense of aesthetics. Exchanging the occasional joke as they intermittently stop to play with their iphones and blackberries, the individuals filling the hotel’s freezing boardroom are participants in a two day workshop on open data sponsored by the Ministry of Justice. Georgia, the post-Soviet state that entered into a brief war with Russia in 2008, may not be the first country that comes to mind when it comes to cutting edge journalism and new technologies, but over the past year an open data movement has been spearheaded by the country's very active civil society, and international pressure for open governance, combined with the efforts of several influential non-governmental organizations, has forced the Georgian government to cooperate, at least in appearance.

Open data has quickly become the newest trend in journalism. Over the past several years, journalists have begun to rely more heavily on big data sets to break and tell stories. The Guardian has been leading the way with this initiative in the UK, hosting its very own data blog . As data has become more readily available, newsrooms have started brainstorming how to best visualize data in order to present it to the public in a way that is understandable and easy to use. Not only is obtaining, cleansing, and analyzing data a must for investigative journalists, but communicating data in a way that is meaningful to audiences has proven to be an additional challenge. Russian dissident Aleksey Navalny’s latest website, which allows users to explore data on the business deals that made Sochi, just 20 kilometers from a conflict zone, the home of the 2014 Winter Olympics, is just one example of what can be done.

Meanwhile, several very influential governments have embraced open data as a vital component of open government. Determined to make government more transparent, the United States created the website data.gov to provide federal, state, and local data to the public. Researchers and journalists can now pore over a seemingly endless collection of data sets on agriculture, health, science, and employment, among other topics. Everything from baby names from social security applications to monthly house price indexes is available on the site. Moreover, the full data sets are available to download in machine-readable format such as Excel and CSV, making computer assisted reporting a possibility for anyone interested in using data to tell a story. Following this example, the United Kingdom created its own version of the site and launched data.gov.uk in January 2010.

Not one to be left out of the loop, the Georgian government launched data.gov.ge shortly thereafter. But experts on open data complain that the information available on the site is unusable. Most of the data comes in the form of links that lead you back to Geostat , a government website that provides statistics known for being inaccurate. “Very few people actually consider how people are going to use the information provided”, states Eric Barret, executive director of the non-governmental organization JumpStart-Georgia. “Official documents are often published as uneditable pdf files – useless for analysis except in ways already done by the organization itself."

The issue of data usability was discussed extensively during the open data workshop, which was held within the framework of the Open Government Partnership . The OGP is an international voluntary platform for governments that aim to be more open and accountable. Georgia joined the OGP in August 2011 under the government of Mikheil Saakashvili, but many complain that the first action plan lacked teeth and that the government implemented its recommendations halfheartedly. This year’s open data workshop, which brought experts on open data to Tbilisi from Austria and Germany, was hosted at the behest of NGOs working to help the current government draft the OGP action plan for 2014-16. One of the civil society activists’ biggest demands during the two day event was that government data to be made consistently available in machine readable format.

While Georgia is still lagging behind countries like the United States and the United Kingdom, it has an unexpectedly large number of data sets already available online. For example, the Georgian public registry provides information about all companies and legal entities, their directors, shareholders, and other representatives. Transparency International Georgia, one of the most influential non-governmental entities in the country, has been working to analyze the information available to uncover cases of corruption. For example, the organization found that when you cross-reference party financing data and public procurement records with the asset declarations of MPs, it is possible to discover which politicians awarded non-competitive government contracts to companies of which they were either full owners or partial shareholders, companies that then contributed substantial funds to the election efforts of the MPs’ political parties. While it is the Georgian non-governmental sector that has been researching these cases thus far, these resources will prove invaluable to any serious investigative journalist interested in uncovering brazen cases of political corruption.

Aside from their investigative work, the civil society organizations behind Georgia’s open data movement are busy creating a variety of websites that provide data in an easy to use format. While Transparency International-Georgia created a platform dedicated specifically to monitoring government procurement tenders , JumpStart-Georgia created its very own elections portal based on data released by the Central Elections Committee, and the Institute for the Development of Freedom of Information compiled a list of government responses to freedom of information requests. Some of these sites, however, still need to be consolidated and publicized if they are going to be of optimal use to the public.

As the only Georgian non-governmental organization specialized in the use of technology to sift through large data sets and communicate their findings to the public, JumpStart-Georgia has been instrumental in the promotion of open data and open government in Georgia. Throughout the past several years the organization has provided trainings in data analysis and data journalism to many of the country’s aspiring journalists, ensuring that the impetus behind this open data movement is sustained among a future generation of investigators. JumpStart’s work also inspired the Georgian Institute of Public Affairs (GIPA) to translate the invaluable data journalism handbook into Georgian, a language spoken by an estimated 5 million people worldwide. JumpStart’s own website is a prime example of how data can be made public, as each of the organization’s infographics is accompanied by a link to the corresponding data sets. Readers no longer have to make assumptions about the credibility of a source or take a blind leap of faith when choosing to link to an article.

On Tuesday 28th of January, JumpStart held a public event in the Europe house gallery in central Tbilisi. The day was dedicated to exhibiting many of the information graphics and interactive visuals the NGO created throughout the past year. Considering how new data visualization is to a country like Georgia, the event was an enormous success. A large crowd of design students, journalists, and government officials milled about sipping wine and soaking in the information on display. The infographics included data on drug use in Georgia, LGBT rights, domestic violence, abortion, unemployment, and air pollution. But despite the fact that these are controversial topics in conservative and highly religious Georgia, the gallery goers appeared more intrigued than outraged by the surprising statistics on display. On the day of the exhibition, JumpStart staff delivered three open workshops to the public. The workshops’ filled seats were testament to the growing interest of the Georgian public in open data. Activists now expect that the increased public interest will succeed in pressuring the government into honoring its commitment to be more open and transparent.