No way out of the protests 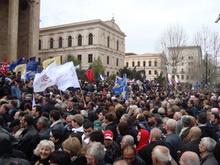 On 9 April, the government opposition in Tbilisi, Georgia started a new wave of protests to demand the resignation of Georgian president Mikheil Saakashvili. The protests have been peaceful but are rapidly heading into a stalemate

The fear that the first day of protests would result in a clash with the government forces proved wrong. According to different estimates, between 25,000 and 150,000 people took part in the protest on 9 April. The figure of 25,000 seems much more realistic than that of 150,000. On the other hand, 25,000 to 30,000 protesters are not a small number for Georgia. The country has practically never had protests with more than 30,000 people. During the greatest success of the national independence movement between 1989 and 1991, protests never involved more than 15,000 persons. Quite probably, even in the critical days of the "Rose Revolution", on 22 and 23 November 2003, the protesters did not much exceed 25,000 to 30,000 persons, even though the organizers talked of between 200,000 to 250,000 participants.

In the days after 9 April, the number of protesters diminished considerably to around 10,000 people. This should not be surprising given that "9 April" had been advertised for three months and the entire country had been preparing for it - both the supporters of the protests as well as its opponents. Over the past two to three weeks, much of the news-media talked constantly of 9 April, so the demonstrations did not involve only the supporters but also basically neutral citizens curious to see what would happen on "9 April".

Given that nothing in particular happened, the curious returned home and only the real protest supporters have remained.

Overall, different factors determined the peaceful character of the protests. First, the international community firmly imposed the condition that both parties should keep the confrontation within constitutional limits. In simple terms, the opposition was told "demonstrate all you want but do not try to take power by use of force." At the same time, the government was also encouraged not to use violence, unless government institutions or citizens were clearly threatened.

The West's position has been expressed by the European Union representative for the South Caucasus, Peter Semneby: "First of all, the protests have to be peaceful, and this is responsibility of both the government as well as the opposition. Then, it has to be seen what will happen after the protest: the streets should not be the place to resolve this type of questions. Because of this, both parties are asked to sit down and negotiate, underscoring however that protests carried within the boundaries of law and the constitution are an inseparable part of democracy."

A second factor is the arms-purchasing scandal that directly involved protesting representatives of the "Democratic Movement", led and financed by the former president of Parliament, Nino Burjanadze. Following the scandal allegations, the opposition supporters have had to make a special effort to demonstrate that they intend to act peacefully and that the arms scandal is only a government provocation.

Finally, there is the position of the government authorities. The president and his team have already blundered when they forcefully dispersed the protests on 7 November 2007, which essentially backfired by giving the protests additional vigour. Authorities have understood that any use of force goes against their long-run interests.

All these factors produce a very particular framework. The protests are being carefully monitored - the Georgian NGO representatives follow the protests wearing bright-red coloured uniforms in order to avoid possible provocations. An EU monitoring team in Tbilisi has also been observing the protests. The authorities have installed tens of video cameras in the area of the protests in order to record everything that happens. However, in order to avoid any possible confrontation, not a single police officer is close to the protests: the police remain either in the government buildings or at a certain distance from the protestors. At this stage, the situation is calm.

"We don't need share in power. There cannot be talk of a coalition government. The only solution without any alternative is the resignation of Mikheil Saakashvili. Discussion of other important issues for the country is possible only after Saakashvili's has stepped down," said Eka Beselia, an opposition leader.

For their part, the authorities have stated that under no conditions would they agree to a resignation by the president and early elections.

"If the opposition accepts the idea of having a constructive dialogue and it offers realistic and acceptable conditions, we are ready to accept them and start negotiations. We exclude the possibility of having a referendum on this issue or early elections motivated only by reasons of political convenience, but if the opposition seeks dialogue and does not talk only of ultimatum, it would be possible to reach an agreement," stated the president of Georgian Parliament, David Bakradze. Currently, a constructive dialogue between the government and the opposition does not seem possible.

Obviously, the stalemate is rapidly approaching. The opposition does not have the people's unconditional support; most citizens dislike both the government and the opposition. Saakashvili's declining popularity does not automatically mean bigger support for the opposition. Therefore, the protests did not become as massive as the organizers had expected. On the other hand, the number of protesters is definitely not small and the government cannot afford to ignore them. The result is that the opposition has enough strength to maintain a constant level of popular support, but not enough to force the president to resign.

However, the phase of major risk has not yet been reached. The opposition leaders cannot accept negotiations because for the past three months they have been repeating they would not accept anything less then the president's resignation. Stepping back now would mean wrecking their political career. If the number of protesters starts to decline, perhaps the opposition could decide to go beyond constitutional limits and thereby cause the government to react promptly and severely.

Currently, there is no visible way of overcoming the standoff that has been created. According to some, the only option could be the involvement of the Georgian Orthodox Church, which could calm down both the government and the opposition. However, at the moment, the church is silent and only releases generic statements about the necessity to preserve peace in the country.