It could have been different 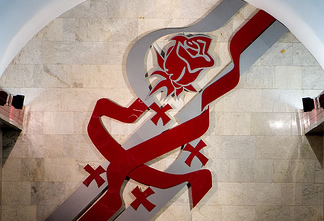 On 9 April 1989, Soviet troops dispersed demonstrations in Tbilisi, killing 20 people. That event changed the political debate in Georgia and deeply influenced further developments in the two decades that followed, a period of great expectations and missed chances. An interview with Marina Muskhelishvili

Marina Muskhelishvili is senior researcher at the Centre for Social Studies (CSS), Tbilisi, Georgia. She was one of the founders of the CSS, an independent non-governmental organization which studies problems of democratic development and post-Soviet transformation.

On 9 April 1989, Soviet troops dispersed the anti-Soviet demonstrations that were taking place in front of the Parliament in Tbilisi. Twenty people died and hundreds were injured. What is the significance of these events for Georgia?

I think this was the most important event in Georgia in the last 20 years because the passion involved in those protests and the way things happened, to a certain extent, defined later developments. The political debate became very radical, very polarized, and after these events a pragmatic and rational approach seemed impossible.

If it hadn't been for those events, Georgia's recent history would have been less violent, less revolutionary, less oriented towards conflict and wars. Maybe things would have developed in the same way, but with less painful results.

Were you in Tbilisi those days? What were the common feelings and expectations?

Yes, I was in Tbilisi. Well, we were all scared, and it was very painful for everybody. It is difficult to say what expectations we really had. We were very happy with Perestroika and all these new developments that were very important for us, and we were hoping for a better future. It was definitely a period of great hopes and great expectations.

Somehow these expectations were broken by the violent events of April 1989, and on that day I really feared that things would go in the wrong direction, not toward democracy or toward freedom, and that something bad would happen. And, actually, a lot of bad things happened... Civil war, the war in Abkhazia, political turmoil, etc.

At this point the Soviet Union was collapsing, and nationalist president Zviad Gamsakhurdia came to power...

Zviad Gamsakhurdia's period in power really contradicted the expectations of Perestroika. He was not an experienced politician and he had a simplified approach towards politics, very one-sided. He was very radical with his opponents and was not open to negotiations with different parts of society. He did not accept entering into dialogue with Soviet nomenklatura, which was very influential in Georgia, and this ended in civil war.

Afterwards, Shevardnadze came to power. I would say that, from the very beginning, Shevardnadze's period in power was successful. He started from nothing, from zero. He managed to stabilize the situation, to somehow bring Georgia back to constitutional order and to produce a new constitution in 1995, which was not bad at all. Parliamentary elections were quite free in 1992 and also in 1995, even if a lot of parties were left out of parliament because of the five percent electoral threshold.

Would you say that Shevardnadze was somehow trying to bring back the spirit of Perestroika?

Yes, I think he tried, to some extent. When he became president, he had nothing in his hands. All the power was in the hands of paramilitary groups' leaders. Step by step, he managed to overcome it and to give real power to the institutions, to the state structures. And beginning in 1995, a kind of economic development started and, step by step, privatization and other reforms started to take place.

From a certain point of view, I would say that those were the best years for Georgia. The situation, of course, was not so good, but at least some things were going in a positive direction in the 1990s.

Still, it seems that Shevardnadze was not so popular by the end of his period in power in 2003

Yes, the political situation was gradually worsening and Shevardnadze was very old.

His administration was extremely corrupt. His policies were less and less reformist. After the 2000 presidential elections, his own political party realized that Shevardnadze's term in power would end in five years, so the main political question focused on who would take Shevardnadze's place.

The government and parliament were in a deadlock, putting Shevardnadze in an even worse situation of impasse because nothing was happening in the country. It was at this point that the young leaders, who afterwards led the "Rose Revolution", started becoming more and more popular because they were lobbying for reform, and the government wasn't doing anything.

Did the December 2003 "Rose Revolution" bring significant changes for the country and real democratic development?

I think that with the "Rose revolution," we lost a chance to have democracy. What would have happened if we hadn't had the "Rose revolution", if Shevardnadze had stayed in power for the next two years? The elected parliament was already in the hands of the opposition and rather plural. The conflict between government and parliament probably would have continued, but this would have opened a possibility to a change of power by democratic means and would have given Shevardnadze the chance to change the constitution and turn Georgia into a parliamentary republic.

And this is what I said the day before Shevardnadze resigned. I appeared on TV on that day. It was very difficult for one to appear on TV if one clearly supported neither the government or the opposition. I had about two minutes, and I said, "people, you are crazy, don't do it. You will never get democracy this way. Whichever side wins, you will not get democracy. What you should do now is to immediately start a process of constitutional reforms. Change the constitution in order to have a parliamentary republic, change the powers of the president, and then Shevardnadze may resign, you can have proper elections and then you can elect Saakashvili, or whoever else."

But things went differently. Saakashvili became president following this wave of protest, and now it is easy to notice undemocratic and even authoritarian tendencies in his style of government.

Since the fall of the Soviet Union in Georgia, a lot has been done to leave the Soviet past behind and to erase all the symbols of that period. Do you feel there is nostalgia for the Soviet period? How much sovietism is left in contemporary Georgia?

No, there is no nostalgia for Soviet times. Of course, it is not possible to go back. But the Soviet mentality left deep marks, in particular with the idea that the government should be responsible for everything. There is little push for spontaneous collective action, in particular out of Tbilisi.

Also, in regards to our business community, Soviet teachings and education left a clear impression, starting in the 1990s. People think they are going towards the West, but their picture of the West is painted by Marxism-Leninism. From their Marxist-Leninist education, they know that doing business is an absolutely cynical exercise. You have to exploit the workers, kill your competitors, and so on, because that's the West as it was described in Soviet times. So this is what they feel they should do, now that Georgia should be "Western".

So in spite of all the effort dedicated to getting rid of Soviet symbols and leaving behind the Soviet past, Soviet mentality and teachings are still very present?

The dogmatic Soviet mind is still there. I call it the "Three 'D's style" of thinking. Dogmatism, Determinism and Developmentalism, i.e. teleological thinking, or going towards the "bright future", as they used to say in Soviet times. The current political leadership in Georgia still has the same kind of Soviet mentality, but discourse, propaganda, and values have changed. So we are not talking any more about "Communism", we are now going towards "Democracy", but it is basically the same.

You told me a story of missed chances, missed opportunities. Looking at the future, do you think there are real opportunities for change, or a way to bring back the expectations and the hopes that were there in perestroika times... To realise them somehow?

I would say that, during the perestroika period, we didn't expect that it would be so painful, so difficult, and that it would cost so many human lives. So if I could go back, I wouldn't buy my freedom at the cost of other's people lives because now I feel responsible. I am much better now than I was 20 years ago. I am free, to some extent I do what I want, I get the information I want, I live a better life, and I am among those who gained from these changes.

But so many people, especially of the older generation, died of hunger, misery, illness, not having the same level of social protection they had in Soviet times. And we didn't realise that it would cost so much, that people would die in civil wars, that they would lose their houses, and so on. I feel somehow responsible for what happened.

Had we been more rational and more pragmatic, it would have definitely been better, less painful for society. I am not saying that the goal was wrong, but that the choice of leaders, strategies, and priorities could have been different. If they had been so, all these transformations might have been less traumatic for society.