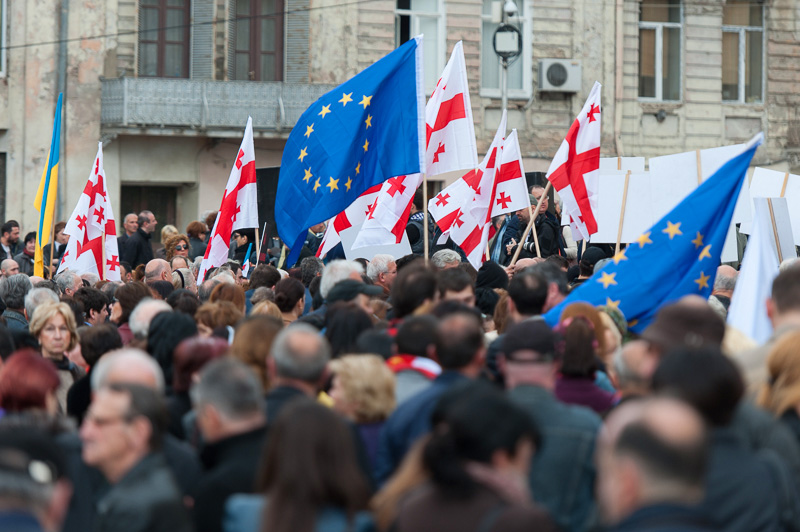 Georgian and EU flags flown at the anti-Russian rally staged outside the State Chancellery in Tbilisi (photo O. Krikorian)

In Georgia the majority of the population is in favor of closer ties with the European Union. However this will depend on progress made in terms of human rights protection and it is in these issues that stumbling blocks might frustrate Georgian ambitions

With neighbouring Armenia having already given in to pressure from Moscow to join the Eurasian Economic Union instead of signing an Association Agreement with the EU,  all eyes are now on Georgia — not that the country’s orientation was ever in any doubt. According to the latest household survey conducted by the Caucasus Research Resource Centres (CRRC), more Georgians support eventual membership of the European Union than its Russian alternative.

According to CRRC’s annual Caucasus Barometer released earlier this year, 65 percent of Georgians support the country eventually seeking EU membership compared to 32 percent content with joining the Eurasian Economic Union. In Armenia, those figures were 40 and 55 percent respectively, while Azerbaijan has so far expressed no desire to join either. Only 34 percent of respondents there said they supported EU membership.

Nevertheless, some argue, few in any of the three South Caucasus countries fully understand what the EU Association Agreement entails or what benefits it will bring. Turkey, for example, signed its agreement in 1963 and over half a century later has yet to meet the criteria for EU membership.

But what an Association Agreement will bring is closer economic and political ties with Europe as well as preferential treatment in the area of trade through the Deep and Comprehensive Free Trade Agreement (DCFTA). This will be dependent on progress made in terms of human rights protection and democratic reform, but it is in these issues that stumbling blocks might frustrate Georgian ambitions rather than any Russian pressure which emerges.

And on Sunday, 13 April, it was these issues that came to the fore in the form of two separate events that were staged last minute, coincidentally or not, just hours before a concert organised by civil society to promote European integration kicked off in Tbilisi’s Europe Square. 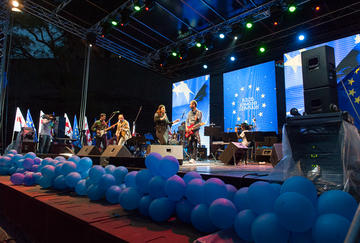 Several well-know Georgian bands performed at the civil society organised events while video addresses from public figures were shown in-between on screens behind the stage. (Photo by O. Krikorian)

While the EU denies that the choice between it and Russia is a geopolitical one, the former party of power — the United National Movement (UNM) — does. Alongside NATO membership, and In light of events in Ukraine, Europe is seen as an ideological choice to remove Russia influence from the region. That was very evident at the first event — a rally outside the Georgian State Chancellery — which called on the authorities to criminalise ‘public denial of Russian aggression.’

The demonstration also demanded an end to the public display of Russian symbols in Georgia as well as Russian TV broadcasts. Although organised by a group called Iveria, attendance by UNM figures including Gigi Ugulava, the suspended Mayor of Tbilisi accused of corruption while in office, was particularly noticeable. He is just one of many UNM officials who face prosecution under the new Georgian Dream coalition government.

Former President Mikheil Saakashvili has not been spared either and was last month instructed to return to Georgia to answer questions in a number of cases opened by the prosecutors office. Both Europe and the U.S. was alarmed. “#Georgia Watching w/concern move 2subpoena M.#Saakashvili. No one is above law but European practice&standards must be followed scrupulously,“ tweeted Štefan Füle, the EU Commissioner for Enlargement and European Neighbourhood Policy.

On 15 April, Georgian Prime Minister Irakli Gharibashvili announced a monitories on prosecuting ex-officials in the run-up to local elections scheduled for June. It remains to be seen what happens afterwards.

A second issue is arguably  more controversial inside the country. Last year, on 17 May 2013, priests led thousands of believers on a rampage in central Tbilisi, targeting a few dozen LGBT activists who chose to mark the International Day Against Homophobia and Transphobia (IDAHOT) with a small and very brief flashmob. Identoba, the leading LGBT NGO in Georgia, says it has no intention of attempting to hold another such event next month given safety concerns.

Even so, that did not prevent members of the Georgian Orthodox Church and the Orthodox Parents Union holding its own rally outside the country’s former parliament building as Iveria’s anti-Russia demonstration outside the Chancellery ended. Coinciding with Palm Sunday, the event was seen by some as a warning to Europe and the government that gay rights were an issue that they had no intention of allowing to be put on the agenda in Georgia.

With the Church commanding significant influence among the population, the Georgian Prime Minister has already given in to what some see as pressure to keep such issues off the table. According to CRRC in its Tbilisi poll organised following the 17 May events, 57 percent of respondents said they believed that holding a IDAHOT flashmob in the capital ‘endangered’ the country. And in CRRC’s 2011 Caucasus Barometer, 87 percent said homosexuality could “never be justified.’

No wonder then that, on 27 March, Gharibashvili proposed that the constitution be changed to define marriage as ‘the union of a man and a woman’ to avoid any ‘speculation’ inside the country regarding the passage of anti-discrimination legislation required as part of Georgian visa liberalisation with the European Union.  Critics of the move say that it was intended to appease the clergy given that such a definition already exists in legislation.

Despite this concern, however, there are few who dispute the country’s trajectory.

“Georgia’s progress in recent years shows the country’s overall readiness for closer ties with Europe,” Transparency International  Georgia Executive Director Eka Gigauri told Osservatorio. “Very often it was this that was motivation for the government  to start in-depth institutional reforms. Georgia has made considerable progress in number of areas, including the fight against corruption and public service as well as electoral reform.”

And it was Transparency International Georgia that was one of a hundred NGOs making up the Eastern Partnership Civil Society National Forum that organised Sunday’s “We Choose Europe” concert. “The idea behind it was to demonstrate unity among Georgian citizens regarding Georgia’s future and that the choice to aspire towards EU integration is made by the people and not one or another political party,” she says. 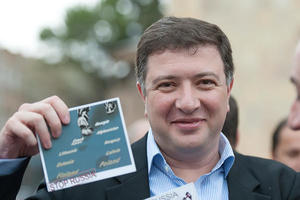 “Both the former and the current government have highlighted European integration as a key element of their policies,” Gigauri continues . “There have been few, if any, differences between the two administrations in this area. Generally, all key political groups, as well as the majority of citizens, support European ideas and values, such as democracy, rule of law, and freedom of speech, although minority rights in particular remain a controversial subject.”

Several European Ambassadors in Georgia joined the campaign which also included video addresses by public figures and outreach conducted online. Georgian President, Giorgi Margvelashvili, opened the event also attended by UNM supporters, but mainly by families and citizens from all walks of life.

“All of us here today are united for a bright goal, which is not just the choice of some political union, neither is this the choice of any politician or a state official,” Margvelashvili told the crowd. “This is not the choice made only by us; this is the choice made by our ancestors, who created this free country – Georgia, who built the freedom, freedom of soul, acceptance of others, tolerance, in the basement of Georgian culture.”

But it is this ‘acceptance of others’ that still looks likely to remain one of the main tests for Georgia’s future integration. “I am sure we can do it and we will do it in order to get home to Europe,” Lasha Tugushi, Chairperson of the the Liberal Academy and another organiser of the concert told online news portal Democracy and Freedom Watch, noting that this particularly meant respect for human rights, democratic reform, and the development of the education and health systems.

Although not officially part of the coalition of NGOs, Identoba’s Executive Director Irakli Vacharadze was present to help the organisers and agrees.

“We will plan other events depending on how the situation progresses,” he told Osservatorio. “I may be too optimistic here, but judging from the U.S. State Department’s annual human rights report, intolerance towards sexual and religious minorities as well as politically motivated arrests are the three main human rights issues in the country. I would be shocked if others didn’t recognise this and prioritise them in their agendas.”

“As civil society organisations, I believe we have significant potential to assist with this process by campaigning at the grassroots level,” says Transparency’s Gigauri. “It is also important that reforms, initiated and carried out by the previous government which have achieved important results in terms of democratic institution-building, are continued.”