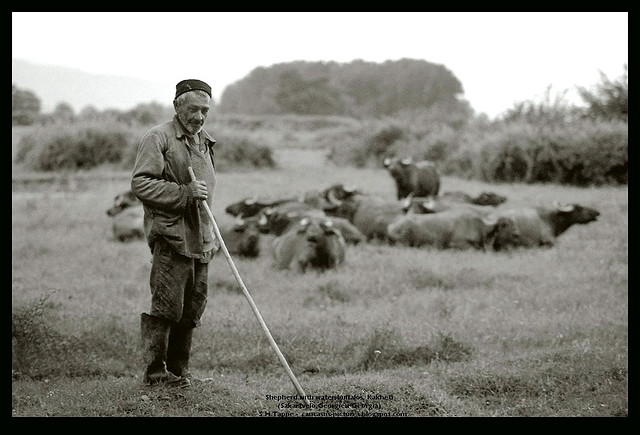 Hit by low harvest yields and double-digit inflation, hundreds of Georgia’s 700,000 small-scale farmers are confronting the start of the spring planting season without the money to purchase seeds. From EurasiaNet

Hit by low harvest yields and double-digit inflation, hundreds of Georgia’s 700,000 small-scale farmers are confronting the start of the spring planting season without the money to purchase seeds.

The agricultural sector accounts for a sizeable chunk of Georgia’s economy -- 8.4 percent, officially – but, in interviews with EurasiaNet.org, farmers in Georgia’s agricultural epicenter, the eastern region of Kakheti, say they are struggling to make a living off the land. Faced with a 13.7-percent inflation rate, Paata Matiashvili, a cattle rancher in the Alazani River valley, said he will be planting fewer seeds this year for grain to feed his livestock and his family. “I don’t know what we are going to do,” he said.

Georgian farmers like Matiashvili, who grazes his cattle on a relatively small plot of 25 hectares, do not see banks or micro-financing institutions as feasible fallback options to raise the cash they need for seeds, fertilizer or fuel. Interest rates at one of the country’s largest agricultural lenders, Bank Constanta, run anywhere from 15 percent to 36 percent, with maturity rates of three months to a year. “The loans from the banks are expensive for farmers,” said Matiashvili. “Agriculture loans should not be looked at as [loans for] a commercial enterprise.”

Longer-term, multi-year loans would give farmers time to harvest their crops and make the money to pay back the loans, he argued.

Nodar, a retired police officer who farms 40 hectares of land in Kakheti, seconds that view. Sitting in his unheated two-story house, he angrily recounted fruitless attempts to secure a loan or credit from Georgian banks and micro-lenders. “I have such potential, such a chance! They will not give me the means to realize this potential,” Nodar fumed.

Bank Constanta’s Dimitri Uchaneishvili, director of project management, noted that agriculture loans are expensive to process because they are small-volume. Interest rates are determined based on what it costs the bank to process the loans and to secure money for them, Uchaneishvili said. Overall, agricultural layouts make up about 24 percent (19 million lari or about $11.2 million) of the bank’s loan portfolio.

Trouble with financing is just part of the problem for farmers this year. An unusually dry summer in 2010 reduced crop yields, and, hence, income for farmers; national figures are not available, but Elkana, a non-governmental Georgian farming association, estimates strawberry yields declined by 70 percent.

In addition, Georgia’s increasing reliance on imported food means that many farmers must contend with dwindling prices for their crops. Georgia-grown Golden Delicious apples are one notable exception; wholesale prices stand at 8 lari ($4.71) per kilogram.

The government recently has acknowledged the scope of the problem, but the policy response is unclear. In March, President Mikheil Saakashvili unveiled a new, 150-million-lari ($87.7 million) budget bonus to “modernize” Georgian agriculture over the next 18 months. Few details about the program are available, however. Ministry of Agriculture representatives did not respond to a EurasiaNet.org request for specifics in time for publication.

One existing government program offers support to farmers for bank loans. Farmers interested in purchasing American-made hybrid corn seeds for more than seven hectares of land can sign a government agreement that will let them secure a bank loan, said Ministry of Agriculture spokesperson Giorgi Chaduneli. The government otherwise sells the seeds for 240 lari ($141.20) per hectare; payment can be made after the harvest, Chaduneli said.

That provision, though, does not reassure farmers like Matiashvili. “[W]ho knows if this corn will come up? And if it doesn’t, then you can lose everything.”

Farming specialists note that the obstacles facing Georgian farmers -- limited financing, small plots and low crop yields -- require a long-term strategy. “No one in Georgia will die from hunger or starvation this year, but this year there is no money to send children to school, or to improve their situation,” noted Elkana training specialist Nukri Mamarmishvili. “That is the problem.”

On the consumer side, the rural population is also facing a daunting problem. To make ends meet amid galloping inflation, farmers and many other Georgians are increasingly relying on store credit and small loans – trends that raise red flags for food security specialists. Many could find themselves caught in a debt trap. Prices for items like sugar and cooking oil have tripled and quadrupled over the past year; other food prices have increased by as much as 130 percent, said Maha Ahmed, country director of the World Food Programme (WFP) in Georgia.

While the Ministry of Agriculture collects data on food production and consumption, no food security program for such situations exists, Ahmed added. “You have symptoms, you have signals,” she said. “If people in Tbilisi are suffering from high [food] prices, what about [the rural population]? But you don’t have a solid figure.”

The higher prices prompted the government to offer one-time 30-lari ($17.65) food vouchers to families, but such measures appear to have provided scant relief for farming families.

Nona Obolashvili, an unemployed teacher who opened a small grocery store in the Kakheti farming village of Bakurtsikhe to help subsidize her family’s income, said that more and more village families are going into debt to buy basics like bread. Each day, roughly 25 of Obolashvili’s customers, the bulk of her clientele, buy her one-lari (about 59 cents) bread on credit.

“People are really suffering,” she said. “This is getting worse every day.”