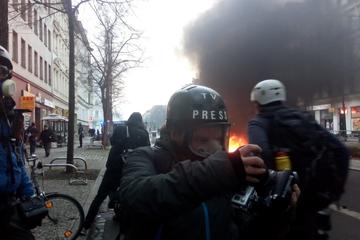 The recent violent attacks against media workers during demonstrations in Germany, four assaults in a week, and similar threats witnessed across Europe, are establishing a worrying trend. The right to free assembly and association is a vital underpinning of a modern and pluralist democracy and has itself come under significant threat across Europe. However, threats against the press and media further weakens their ability to cover demonstrations and to inform the public accordingly. This further undermines the public’s ability to access information and take an active role in civil society.

Attacks against journalists and media workers at protests or demonstrations come from a number of sources, including participants of the protests, activist groups or police officers deployed to maintain public safety. Police across Europe have deployed increasingly militarised tactics when responding to protest movements, including the use of non-fatal firearms, tear gas and aggressive crowd dispersal tactics. Even when journalists and media workers are clearly identified, they have been attacked as part of the police’s response to the protest in general. Police violence against media workers is unacceptable, as is police surveillance of journalists.[1 The European Centre for Press and Media Freedom (ECPMF) and partners launched the Press Freedom Police Codex to respond to this threat at the end of 2019.

Further to this, journalists and media workers covering movements are increasingly targeted by politicians and proposed laws restricting the free flow of public interest information. This threat is heightened at times of civil unrest and uncertainty, such as elections, economic disruption, constitutional issues and the ongoing COVID-19 pandemic. At a time where we need a free media and press more than ever, journalists and media workers are being threatened with arrest, detention and violence.

Here the full statement that OBCT signed within the activity of the Media Freedom Rapid Response.