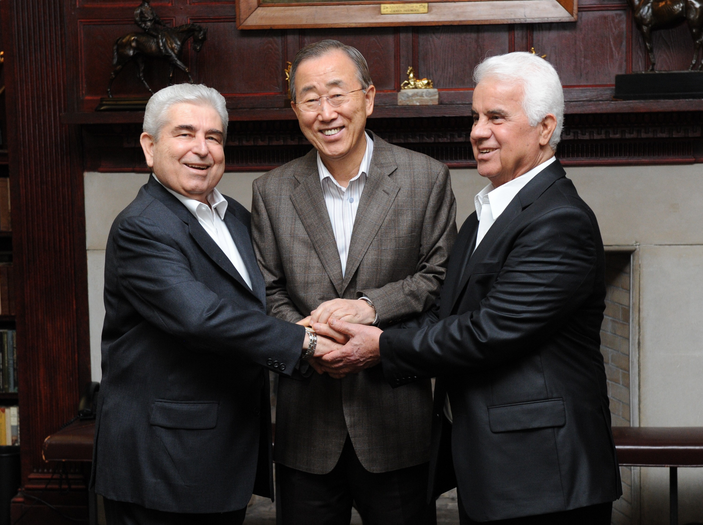 Despite low expectations, the meetings between Greek and Turkish Cypriots that took place in New York on 30 and 31 October had a “positive and productive” outcome. However, some issues still need to be solved

Negotiations started on Sunday. The two Cypriot leaders and the UN Secretary General first discussed the important disputes (property, territory, citizenship, governance and power-sharing). On Monday, the two delegations held separate meetings with the Special Adviser to the UN Secretary General, Alexander Downer, and the Under-Secretary-General of the United Nations for Political Affairs, B. Lynn Pascoe.

Although the two parties did not come to an agreement on any key point, the New York meetings have been deemed as “positive and productive”. On the one hand, this assessment comforts interested parties, internal opinion-makers and international observers; on the other hand, it came totally unexpected and it appears to contradict the Secretary General’s previous statements about the deadlock in negotiations.

Ban Ki Moon, Christofias and Eroğlu held their first meeting in November 2010. The Cypriot leaders then committed themselves to speed up the pace of negotiations and to finalise a process that started in September 2008. The involved parties were to directly manage the process with no mediation by the UN.

The subsequent meetings took place in Geneva on 26 January and 7 July without any actual progress. The Secretary General then intervened so that the parties would understand the stakes involved. In his most recent report to the Security Council on 8 August, Ban Ki-moon stated that negotiations were “languishing”, but he appreciated that the two leaders had promised to hold a new meeting in October. Ban Ki Moon wrote that in October, he would be able to identify and report a “a convergence on key issues” to the Security Council.

The pace of negotiations so far, Ban Ki Moon continued, made it “unrealistic to reach an agreement for a while” (a diplomatic phrasing used to express pessimism among the process stakeholders and to officially recognise the deadlocked situation). Even if references to October could not be deemed as an ultimatum, the meaning of these words was clear: the lack of “constraining deadlines”, restated on several occasions by President Christofias, does not imply that negotiations can continue forever.

No agreement on alternating presidency

The preliminary meetings between the two Cypriot leaders did not result in optimistic forecasts. Between July and October, their delegations discussed the basic elements of a possible Cypriot federal republic: sharing of power between the two communities, management of abandoned properties, territorial borders, the possibility to involve external guarantors for security, citizenship, economy and relations with the European Union. However, the day before the New York meeting, President Christofias confirmed what some opinion-makers and stakeholders already knew when he said: “I had hoped we would get close to an agreement, but we didn’t.”

The most recent obstacle resulted from a change in the Greek and Turkish Cypriot stances on “rotating presidency” in the new Federal Republic and the cross-voting system for parliamentary elections. The rotating presidency was first suggested by Christofias and accepted by Eroğlu’s predecessor, Mehmet Ali Talat, if it was associated with a cross-voting system to promote a sense of responsibility and balance between the two groups’ politicians.

Indeed, as candidates are increasingly aware that some electoral support comes from votes from the other community, they will be less likely to use nationalist rhetoric that helps polarise the two communities. Last week, however, both leaders took one step beyond this point: Eroğlu questioned the cross-election system, while Christofias withdrew his availability to compromise on the rotating presidency.

The Mari case and the hydrocarbon dispute between Turkey and Cyprus negatively influenced the meetings between the two delegations after the meeting on 7 July. The situation was made even more difficult by the goals that the two parties have struggled to achieve during the latest months. The UN expectations and the conditions imposed by Turkey and the European Union are hardly compatible with the needs expressed by the different Cypriot communities. Eroğlu has never accepted a federal solution to the Cypriot issues, but instead favoured recognising the Turkish Republic of Cyprus and establishing two sovereign states on the island. A change in his stance could not be expected.

Christofias had to face perhaps the most difficult moment in his political career. The impact of the global financial crisis on the Greek-Turkish economy, the consequences of the Mari case, the poor outcome of negotiations have further increased his political isolation, which emerged before last summer and led to a government reshuffling in August. The President had to face increasing cross-party opposition and tried to reduce his decline in popular support. Unsurprisingly, his advisers suggested he adopt an approach less open to negotiations, in order not to attract new criticism by opposition parties and the public opinion. Such a choice reduced the possibility to find common agreements with the Turkish-Cypriot counterpart.

The Republic of Cyprus at the EU Council presidency

The Turkish government made it clear months ago that if a solution is not found by next year’s first semester, then Ankara will “freeze” relations with Brussels. On 1 July 2012, the Republic of Cyprus will be assigned the Presidency of the European Union Council: from the Turkish point of view, this only expresses the Greek-Cypriot community and should not be entitled to represent the whole island in Europe.

If a compromise is not made in Cyprus by next June and Turkey’s governing party, AKP, stands firm, negotiations for Turkey’s access to the European Union might cease.

The EU and the UN hope that an agreement is reached in the first months of 2012, so that the two communities can submit it to a double referendum. The probability of progressing in negotiations during the Greek-Cypriot presidency semester and the campaign for the presidential elections (February 2012) is practically nil.

Assessment of these factors led the Cypriot press and external observers to assume that the meeting on 30 and 31 October would have failed anyway, and using a more diplomatic language could have only softened the hard truth.

By giving more time to the parties, the Secretary General allegedly stepped back on the programme set by his August report. He was supposedly forced to recognise the lack of response by the two delegations to his repeated calls to intensify their efforts and to his concealed warnings. On the contrary, if by recognising that negotiations had scarcely advanced, he had decided to make official the failure of negotiations, all energy and resources used in the last three years would prove to be a failed investment.

Therefore, the Secretary General’s comments on the outcome of the meetings were a pleasant surprise. His words seemed to indicate a will to generate more confidence in the possibility of a satisfactory agreement for both parts. Ban Ki-moon focused on advancements on economic, European affairs and internal-security issues. However, he also added, “much remains to be done”. The most controversial issues are governance, territorial borders, extension of citizenship and agreements on property.

The Secretary has interpreted the partial but “encouraging” advancement in negotiations as a signal of the possibility to overcome persistent divergences before the next three-party meeting in January. Ban Ki Moon hopes that in the first months of next year a multilateral conference potentially involving the two Greek and Turkish-Cypriot representatives, the five permanent members of the Security Council, the European Union, Great Britain, Greece and Turkey might finalise negotiations and finally put an end to the long-running Cypriot issue.