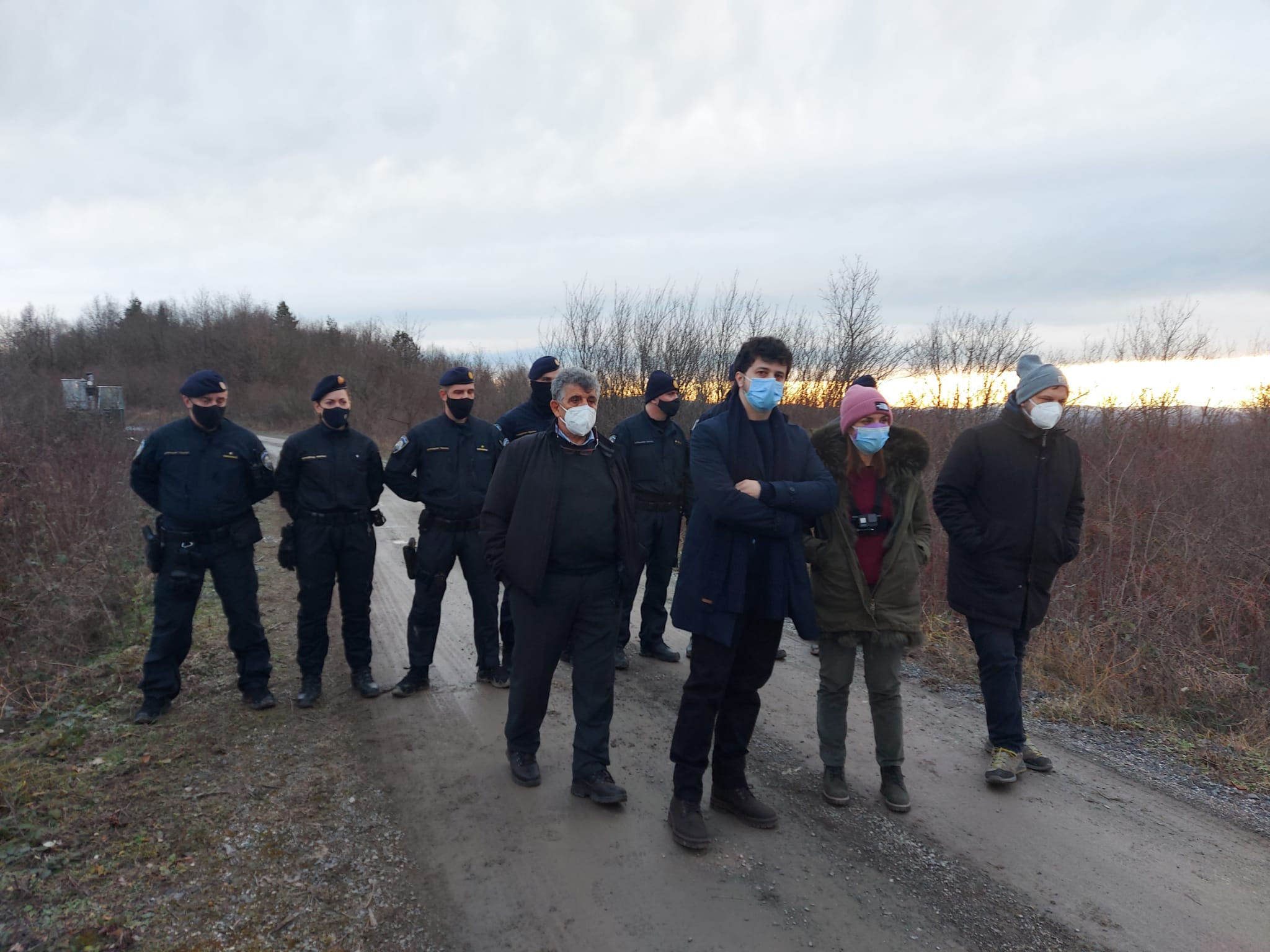 MEPs on the border with the Croatian police (photo © N. Scavo)

On Saturday 30 January, on the border between Croatia and Bosnia and Herzegovina, the Croatian police blocked a group of Italian MEPs – an event that highlights how explosive the situation is and how much the solution can only be a European one

"This is just the latest in a series of provocations against the Croatian police in the performance of their duties". Thus Croatian Interior Minister Davor Bozinovic commented on the incident that took place last Saturday at the border between Croatia and Bosnia and Herzegovina, where four Italian MEPs were blocked by Croatian police while visiting the region around Bojna, an area where in recent months many illegal pushbacks and acts of violence against migrants by the police have been reported, perpetrated.

"It was not an official delegation, but a private visit", continued Bozinovic, referring to the mission that MEPs Pietro Bartolo, Alessandra Morretti, Pier Francesco Majorino, and Brando Benifei (all with S&D) had organised via the Croatian ambassador to Rome. After a few meetings in Zagreb on Saturday morning (including a visit to the Porin centre for asylum seekers ), the four MEPs – accompanied by three journalists – headed to the Croatian-Bosnian border and then to the Bojna area, east of Velika Kladuša, with the aim of observing the checkpoint between the two countries. 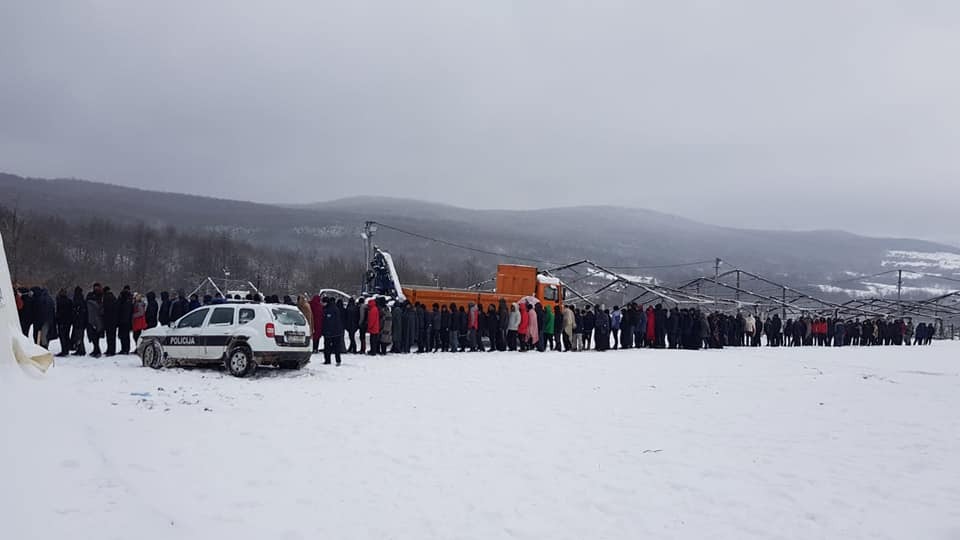 The videos published by newspaper Avvenire and by Fanpage tell the sequel, namely the sudden intervention of the Croatian police who prevented the MEPs from inspecting the border. "The police stopped the group 200 metres from the border and told them they could not cross the border illegally. Seven police officers blocked their way", explained in a press conference on Saturday evening the border police chief Zoran Ničeno, according to whom "at that moment, also migrants wanted to cross the border (from Bosnia, ed.)".

To prevent the visit of the MEPs from allowing migrants to enter Croatia, the Zagreb authorities therefore decided to interrupt the group's mission. "We proposed for them to look at the border somewhere else, but they refused. Then they went to Bosnia and Herzegovina", concluded Niceno, while Bozinovic lashed out at the opposition and in particular against Croatian MEP Biljana Borzan (S&D), who allegedly defended her fellow MEPs instead of the "Croatian national interest", as stated by the minister.

The provocation of Paola L.

What really happened on Sunday at the Croatian-Bosnian border? Indeed, there seems to have been an organised attempt to cross the border just as the MEPs were visiting. Yesterday, Croatian portal Telegram revealed that on Saturday an Italian journalist, Paola L., allegedly tried to pass from Bosnia and Herzegovina to Croatia, taking 11 migrants with her, with the aim of "showing MEPs the reaction of the Croatian police".

This was stated by officer of the Bosnian Border Police (GP BIH) Svevlad Hoffmann, according to whom "the journalist asked our agents to let a group of migrants enter Croatia illegally so that MEPs could see how the Croatian police treated them". The woman, legally resident in Bosnia, also said she was in contact with the journalists who were accompanying the delegation of MEPs (hence the accusation of "provocation" expressed by Minister Bozinovic against the entire delegation). Bosnian law enforcement officials refused to let the group through. Svevlad Hoffmann told the Croatian press yesterday that the investigation is still ongoing and that a complaint against the woman is not excluded.

"Let's not divert attention from violence"

Three days after the events on Saturday, a climate of bitterness reigns at the Center for Peace Studies  (CMS), one of the most active non-governmental organisations in Croatia in the protection of migrants and asylum seekers. The events of Saturday may in fact jeopardise a long process of reporting and awareness-raising. "However, we must not divert attention from the bigger problem: the violence that migrants and refugees have suffered for over four years at the Croatian-Bosnian border and which has also been denounced by the authorities of the Una-Sana Canton", points out Maddalena Avon.

Since the agreement between the European Union and Turkey has somehow closed the so-called "Balkan route" of immigration, the border between Croatia and Bosnia and Herzegovina – or the line that marks entry into the EU – has in fact become a place of violence. There are now countless reports of the Croatian police carrying out illegal pushbacks (Human Rights Watch ), beatings and theft (Doctors without Borders ), acts of pure sadism or even sexual violence (Danish Refugee Council ), and torture (Amnesty International ).

The latest complaint, published last Monday by The Guardian , reports the testimony of a family rejected by the Croatian police just near Bojna. "They searched her as if she were an adult. I couldn't believe my eyes", Maryam, a young Afghan woman, told the London newspaper, referring to her 10-month-old daughter Darya. According to the woman, the Croatian agents removed the child's diaper to verify that there was no hidden money or mobile phones. Migrants rejected from Croatia routinely report agents robbing them and destroying their mobile phone.

The tried and tested practice of pushbacks

Unfortunately, there are thousands of such stories on the Croatian-Bosnian border (the Danish Refugee Council estimates 20,000 pushbacks between 2019 and 2020) and in particular in the Bojna area. "Every day we receive many requests for help from that patch of land. People who have already crossed the state border and are therefore on Croatian territory ask us how they can apply for asylum", explains Maddalena Avon of CMS. "We ask them for their authorisation and then we transmit their data, including GPS coordinates, to the competent authorities (the Ombudswoman and the police), often also asking for an ambulance because there are pregnant women, children, people who are unconscious or frozen from the cold".

What happens next, however, is almost never the registration of an asylum request by the Croatian institutions – quite the opposite. "Systematically, the police tell us that they have not found anyone at the GPS coordinates provided and, shortly after, we are contacted by the same migrants who tell us that they have been returned to Bosnia and Herzegovina", continues Avon. This is the game, as it has become sadly known on the borders of the European Union: every day someone tries to enter and is denied their fundamental right to asylum. They are beaten up and expelled in total silence.

Many institutions remain silent as such harrowing violence becomes routine, including the European Commission, which promised an inspection at the Croatian-Bosnian border, to the Zagreb government, which has never completed internal investigations to punish police abuses. In fact, those who do investigate are sabotaged. The Croatian Ombudswoman admitted she had difficulties in carrying out her investigation due to lack of cooperation from the police. While some agents anonymously reported "illegal orders " and an operation, called Koridor, which acts outside the rule of law (for example, communicating via Whatsapp so as not to leave official traces of the interventions), this has not led to changes.

"What is lacking is the political will to deal with asylum seekers and to assert, for them too, the rule of law", concludes Avon. In fact, the recent decision by the court of Rome against Italy for the so-called "chain rejections" (between Italy, Slovenia and Croatia) only confirms the existence of a shared responsibility, at European level, in establishing a climate of illegality at national and EU borders. The European Commission itself must answer for its possible complicity in covering Zagreb's failure to create an independent border police monitoring system – a system for which Croatia has received European funds.