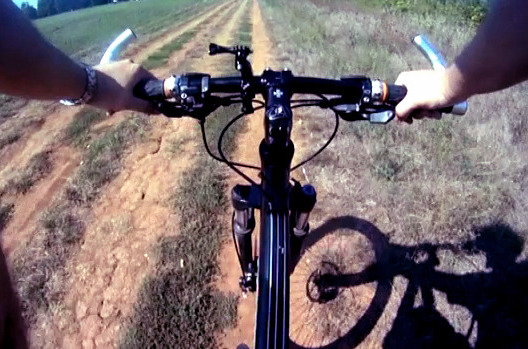 Red sky in the morning

The red soil in freshly ploughed fields glimmers in the morning sun. It's a cool September morning in Vrsar on the Istrian coast between Parenzo and Rovigno. Just the day before, mountain bikers put themselves to the test over this ground in the first leg of a three part bike race, the Parenzana, which has now reached its 16th edition.

Tired and covered in this fine, red soil, at the end of a 33km race they crossed the finishing line in the Istrian town of Fontane/Funtana; a truly international race with competitors coming from not only all over Croatia, Slovenia and Italy but also from Hungary, the Czech Republic, Denmark and even as far as Portugal.

Our leg of the race will follow the literary Casanova's path as described on the very up to date Istria-bike website which gives full details for anyone wanting to go mountain biking in Istria. This website allows you to download all necessary information including maps, altimeters, GPS details and road book.

There is also a map of the route in the centre of Orsera and the bike rent places give out pocket maps. With modest expectations, we set off to follow part of the Parenzana route in order to discover and take in this part of Istrian landscape which is becoming a mecca for mountain bikers.

This Casanova path takes its name from the Venetian adventurer/Latin lover, because he visited the city of Vrsar-Orsera twice and was struck enough by it to describe it in his memoirs...

From the centre of Orsera you head south towards the Lemme Fjord. On leaving the last houses behind, you carry on along gentle rough roads surrounded by vineyards and olive groves. The way is clearly signposted at every junction. You ride over flat and straightforward land and every now and then the forest opens out so you can glimpse the spectacular Lemme Fjord.

After a couple of kilometres you reach one of the most interesting points, Saint Romualdo's cave, one this hermit's dwellings at the start of the 16th century. This cave boasts a wonderful view over the Lemme, a natural fjord around 10 kms long formed by the River Pazinčica between Rovigno and Vrsar. It was once the border between the two Roman provinces of Italy and Dalmatia.

Some steep stoney roads lead down the fjord's limestone rocks to vegetable gardens and jettys down below. Even though it is late September, the sun is still delightfully warm.

Back on our bikes, the road enters the Kontija Forest with its maritime pines and oak trees. The path becomes more hilly but is a pleasant ride through the forest's shade and after a few kilometres you reach the dwelling of Klostar, which is the most eastern point of the route as well as being the highest at 93 metres above sea level.

In SeeNet II, the Veneto Region leads the Action on joint promotion and enhancement of cultural, environmental and historical heritage between Istria and Varaždin, together with Tuscany and Friuli Venezia Giulia, with technical partners Informest and Unioncamere-Veneto.

The autonomous Province of Trento is also involved in mountain bike activities through the Action on enhancement of environmental tourism in particular in the areas of Nikšić and Peja/Peć.

Here it is possible to have a rest and a bite to eat. It is near the Vrsar to Rovigno road, there are some old convent ruins and a few farmer's houses. If you want, you may leave the Casanova path at this point and by going back up north towards the village of Mirasi you can join the Saint Eufrasian routes in the Parenzo sector.

We head back west in the direction of Vrsar, following the road parallel to that we came along, enjoying a refreshing slight descent which affords an easy and pleasant ride through the forest. We soon get to asphalt, which is the road leading to Vrsar airport, and from here we cross over going North and take the path forking off to the town of Funtana.

The landscape has now completely changed as we are no longer in the forest but are pedalling through fields along roads used as farmer's access. There is even an old abandoned petrol pump and a Ferrari Club, giving a very vintage feel, in the heart of this Istrian country side. The ground is now red like a tennis court, and is a wonderful ride like pedalling over velvet with the sea nearby. Before arriving, we ride through the Funtana vineyards which are a tribute to one of Istria's main produces.

We are now on the last stretch as we join the cycle path once again through the small town of Funtana, and only a few pedal strokes away Vrsar is just within reach below us.

Parenzan athletes are used to doing this path at great speed: the route's 22kms along with its 150m of difference in height is simple work for those used to the fatigue of mountain biking. However, this stretch gives a good idea of the natural beauty of Istria's mountain bike routes with its vineyards, olive groves, red soil, limestone, sun and sea. An infinity of paths, winding roads and cycle paths all perfectly signposted. You are spoilt for choice, and often tempted to leave the bike behind to adventure into another little village, up some other hill and then on to another and then another again...

Ever wanted a bike?

On going around inland Istria, you are soon aware of quite how popular mountain biking has become. The culinary and hospitality possibilities in Istria suit the pace of a cycling holiday, which can be both slow and fast at the same time. Cycle tourism actually prolongs the tourist season and what's on offer satisfies the cyclist's requests, from farmhouse holidays to places to eat.

Mountain biking and rural Istria suit each other well in a responsible and sustainable way. In September and October, when seaside tourism is by now at its close, hotels and holiday flats are still full, not only with those trying to enjoy their last chance to get a tan, but also with those who have come on holiday with their mountain bikes.

Many come from Germany and Northern countries, and not all are young; greying hair, tanned faces, cycling outfits, solid calf muscles with their impeccably kept bikes; this is all part of the love for mountain biking. These groups of tourists can be seen in the various restaurants in inland Istria, enjoying a meal or a drink with their bikes parked under a tree, having cycled along kilometres of paths and tracks. After their meal they get back on their bikes to go back to their base, or go on to the beach for their last swim and sunbathe. The day after the red soils will glimmer again and the red dust will fly up from under the wheels of our cycle tourists.