No laws, just shame: Sexual harassment in the South Caucasus 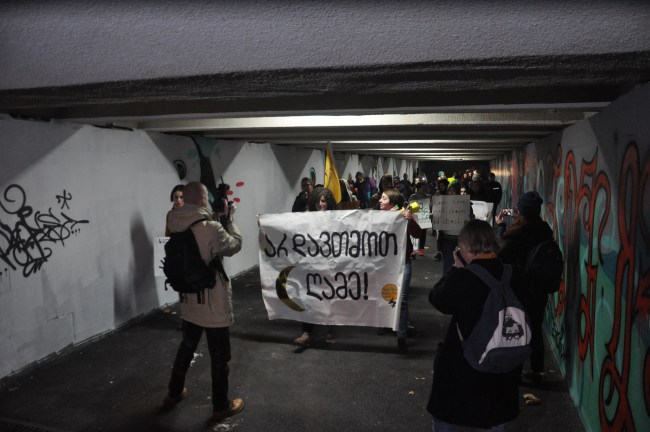 ‘We will not give up the night’, demonstration in Tbilisi on 10 December (Mari Nikuradze /OC Media)

Inappropriate comments and propositions from strangers, groping, and worse are something women in the Caucasus are often forced to contend with, and while the problems seem universal, protections under the law are also universally lacking

When tourists from Arab countries flocked to Baku last summer, there was unanimous outrage in society and in the media, after reports emerged of tourists harassing women in the streets. But the same outrage does not appear to be present when the same behaviour is observed from local men, even though the problem is widely reported by women throughout the Caucasus.

‘He began to touch me from behind’

Thirty-year-old Ayla Allahverdiyeva from Baku says that from the time she was at school, she began to feel threatened by men, and realised that at every step she might be in for trouble.

‘When I go out into the street, I deliberately dress modestly. But, nevertheless, I have heard obscene remarks addressed to me. Men of all ages, walk towards me as close as possible to tell me about their sexual desires and what they want to do with me’, Ayla told OC Media.

One of the most recent and memorable events happened several months ago in the most populous part of the city.

‘Taking advantage of the very narrow pavement, one guy came as close as possible and began to touch me from behind. I turned and asked him to stop and explain himself. At first he was dumbfounded, and quickly made a puzzled face, as if he didn’t understand what I was talking about. Then I raised my voice and said that such behavior was a sign of rudeness, to which he brashly replied: “watch your tongue!” Such types, for some reason, are very indignant when they are accused of being ill-mannered, even though they behave absolutely disgustingly’, she continued.

Ayla still remembers with a shudder an incident in which a man threw an obscene insult at her just to humiliate her. She ran after her abuser for several blocks and forced him to apologise, threatening to turn to the police. She has never actually reached out to the police. Like many others, Ayla does not want to; but she thinks the fear of criminal punishment is the only thing that can stop street harassment.

Afraid to speak out

In Azerbaijan, women are often too ashamed to speak out about their experiences. In a recent interview with newspaper ECHO, the head of the Human Rights Centre of Azerbaijan, Eldar Zeynalov, said there are no statistics on the number of victims of harassment, although some cases of sexual harassment are recorded. He said there is often nothing to record as victims of harassment very rarely turn to the police because they are ashamed or do not believe an offender will be punished.

Lika Barabadze, a physiotherapist from Georgia, says men take advantage of the fact that it’s not socially acceptable for women to speak up about such experiences.

‘The freezing reaction comes from a fear and shame. It is considered shameful to discuss it, plus from a very young age, women are taught that if such a thing happens, it’s their fault. That we are either teasing, or showing too much flesh if it happens, that we should be more in control so that nobody will dare do anything’, she says.

Nvard Piliposyan, from the Sexual Violence Crisis Centre says women avoid filing complaints and appealing to the police, because they are ashamed. ‘Women in Armenia prefer to keep silent’, she said.

‘I’m afraid for my daughter’

Forty-year-old Natalia Viktorovna moved from Donetsk to Yerevan a year ago, after her husband received a job offer.

‘We had just arrived in Yerevan, and I decided to go for a walk. From the very first day I realised that being a Slavic looking woman is complicated here. For some reason, Armenian men think that if you’re Russian or Ukrainian, you should definitely flirt with them and be pleased with the impudent compliments they make’, Natalia says.

She says it’s a real challenge to go out of the house without her husband. Men approach her, make indecent proposals, and try to touch her. Telling these men she is married does not help.

Natalia recalls one incident in which a man sexually assaulted her and she was afraid she would not survive. ‘At that moment, I screamed in the street that I would call the police’, Natalia says. She says she wears clothes that cover as much of her body as possible to avoid attention.

‘I can protect myself, but the problem is complicated for my daughter. She’s only 15 years old, beautiful, and men stare at her all the time in the street. I’m afraid for her’, she says.

No laws against sexual harassment

There is no law against sexual harassment in any part of the South Caucasus. While rape is a criminal offense, harassment is variously categorised as hooliganism, in Azerbaijan, or an ‘insult to honour and dignity’ in Armenia, if it is seen as an offence at all.

Nvard Piliposyan, a lawyer at the Sexual Violence Crisis Centre, says sexual harassment is a common occurrence in Armenia’s workplaces as well.

‘But no one is ever punished because we don’t have any corresponding law. The problem is somewhat regulated by the Civil Code according to which a person can be punished for “insulting the honour and dignity” of another person, she told OC Media.

A 2018 poll conducted by the National Democratic Institute (NDI) showed that there is widespread public support for such a law in Georgia — 77% of those surveyed say they are in favor of parliament adopting a law against sexual harassment.

But despite this public support, last year Georgia’s parliament rejected a bill providing administrative penalty for sexual harassment at workplaces. Since then the Women’s Movement, a local rights group, has addressed parliament with a petition to put penalties in the administrative code for sexual harassment in public and workspaces. Parliament has promised to discuss the initiative, but it’s been put on hold ever since.

Georgian feminist groups have held several rallies demanding sexual harassment be made punishable. The latest rally took place on 10 December, International Day for Human Rights, when dozens of women took to the streets, chanting ‘We will not give up the night’.

‘It’s all in the culture’

Thirty-three-year-old psychotherapist from Tbilisi, Lika Barabadze recalls her experiences of sexual harassment as a young woman. She says it happens everywhere — in the streets, in public transport, and at work.

She remembers when she was nearly 15, hanging out with her friends in the street, when a man approached them and announced: ‘girls, it’s time for you to try some sausage!’

She says men who sexually harass tend to target young, vulnerable women, who are less likely to confront them. One of the most traumatising occurrences she personally experienced happened in her 20s, when she was a student. Walking up Varaziskhevi Street, a man suddenly appeared and showed his genitals.

‘As a therapist I often meet women who have experienced sexual harassment. Given my experience and professional background, I should be more prepared for these kinds of things, but when it happens unexpectedly, when somebody shows his genitals out of the blue, I get bewildered and freeze’, she told OC Media.

Many students walk up Varaziskhevi Street in Tbilisi every day as it leads to Tbilisi State University. It’s a notorious spot because of the man infamous for his exhibitionism.

‘We knew it was common, but we never talked about it. One time a girl told us how she yelled at him. We were surprised to learn he ran away. I always thought he’d come at me if I confronted him’, she says.

She says women start to blame themselves subconsciously even if they rationalise that they didn’t do anything.

‘It is imprinted in our minds and our first reactions are inadequate because we start to look for an explanation in ourselves. My clients often get defensive saying they didn’t wear anything vulgar. Eventually we come to the conclusion that it doesn’t matter what you were wearing or where you were. It’s all in the culture and it must change’, she told OC Media.

From the streets to the city council

Incidents of harassment are far from rare. In Georgia, a 2014 poll conducted in several subway stations by the Women’s Information Centre, a local rights group, reported that 45% of women surveyed had experienced different kinds of sexual harassment in the subway; 73% reported being stared at, 31% being catcalled, 38% being touched, 14% pushed or grinded against, and 6% touched with genitals.

Nara, 26, from Armavir Province, in the west of Armenia, is careful to avoid sitting in crowded public buses. She says that being a woman is especially hard in the regions.

‘When a bus is full of passengers, some men don’t miss the opportunity to get very close and “accidentally” touch you. Once, a man even groped my breasts, pretending that he was going to fall and didn’t manage to reach the handle’.

Such treatment of women is often seen to be ignored, or even condoned by society. When on 13 February, two female councillors from the opposition Yerkir Tsirani party were physically and sexually assaulted in the Yerevan City Council chamber — in broad daylight and live on national television — there were still calls from some quarters blaming the women for their own assault.

‘Gendered violence against a member of City Council from Yerkir Tsirani took place, when the men [from the Republican party] behaved indecently, extending their hands to the woman’s breasts and waist. There was physical violence against the woman. It was a public humiliation. Such a thing never happens to a man’, human rights activist Zara Hovhannisyan, a member of the Violence Against Women Coalition told OC Media.

One former MP Arakel Movsesyan was quoted by EVN Report as saying the women were ‘lucky’ he was not in the council during incident. ‘I will not go into details of what I would do, but what the [Republican Party] men did, they did well’, Movsesyan said.