Bulgaria, amid presidential elections and the referendum 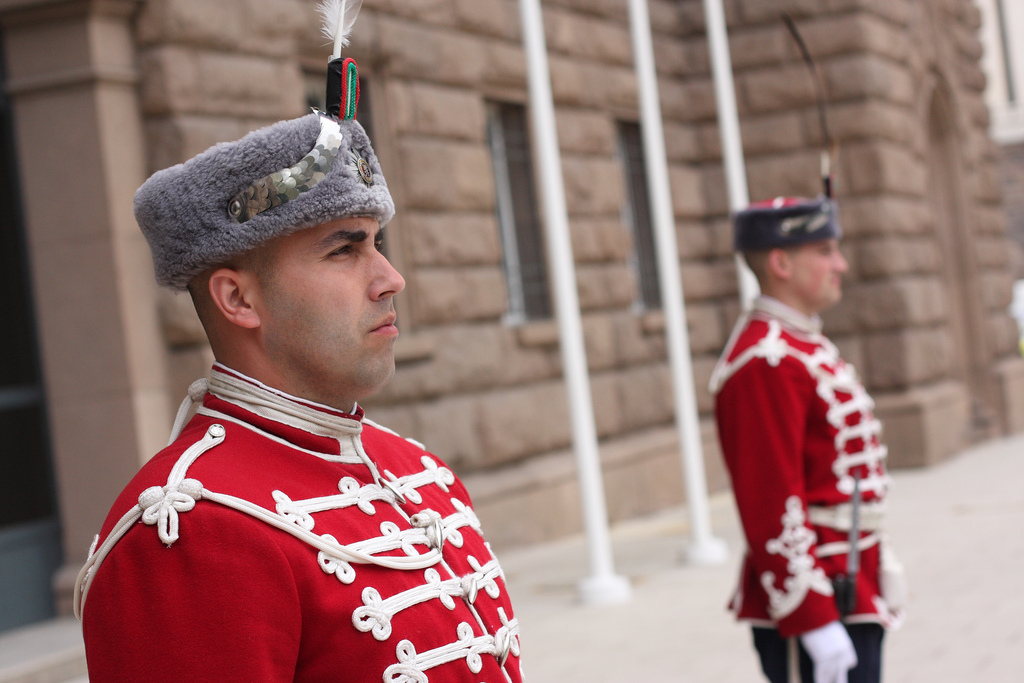 Guards in front of the Presidency building, Sofia - yeowatzup/flickr

On November 6, Bulgarians vote for the Head of State but also to answer three questions in a referendum proposed by a television showman

Next Sunday, Bulgarian citizens will be electing a new Head of State. The President in Bulgaria, even if directly appointed by the electorate, has only limited functions, mainly confined to representative and control ones. But the results of the voting could have serious implications on the uneasy political scene. The polls will also be open for a series of national referendums which could change the electoral system and the public financing of the parties.

An important innovation in this election is the introduction of compulsory voting, a measure which should greatly increase voter turnout, traditionally very low in Bulgaria. Along with the introduction of compulsory voting, the parliament also added the option "I do not support any candidate" on the voting papers. This caused quite a few problems because of its ambiguous nature: ballots with this option are being taken into account when it comes to determine voter turnout, but will not contribute to the overall definition of voters' preferences. MPs were forced to renounce a long pre-election holiday and return to work to bring in urgent changes to the voting rules a few weeks from the vote.

There are several candidates for the President office: however, according to surveys, the only ones with actual possibility of victory are Tsetska Tsacheva, Chairperson of the National Assembly and candidate for GERB, the governing centre-right party; and Rumen Radev, former Commander-in-chief of the military Air Force, nominee for the main opposition movement, the Bulgarian Socialist Party. Both have a wide margin over the other candidates and according to the main opinion poll agencies they will probably compete against each other in the second round.

The nomination of Tsacheva was particularly laborious. After Rosen Plevneliev - the incumbent president, elected in 2011 with the support of the prime minister Boyko Borisov, announced that he would not stand for a second term, GERB had trouble finding a suitable candidate to succeed him. For a long time, the possible candidates were the popular mayors of Sofia, Yordanka Fandakova, and of Burgas, Dimitar Nikolov, as well as the deputy prime Minister, Tomislav Donchev. Tsacheva, a faithful follower of Borisov, was finally chosen.

The Socialists, just recovering from a period of low consensus, decided to choose a candidate outside of politics and external to political parties: the choice went for former General Rumen Radev who, until last summer, was Commander of the Bulgarian Air Force. His life had been dedicated to the military and he has never been directly involved in politics before. In the past, Radev had clashed with Borisov over choices made for the possible relaunch of the Bulgarian Air Force. He eventually resigned from his position just before accepting to run for president.

Tsacheva is the first woman to cover the position of chairperson of the National Assembly. Supported by the strong structure of GERB, she can also count on a solid institutional profile. Yet, she is not considered a very charismatic figure and she is often regarded as being too dependant on Borisov. Many consider her a weak candidate, partly because of the prime minister's own moves during the last months: after the first, cold reactions to the announcement of her candidature, Borisov threatened he would resign in case Tsacheva does not get to the second round, an attempt to throw in all his political weight in support of his candidate.

On the other hand, General Radev relies on appearing as an external expert "on loan" to politics even though he represents a political party – the Socialists – which are still thought of as one of the pillars of the status quo in Bulgaria.

Despite their different political affiliation, the two main contenders had trouble demonstrating ideas and truly alternative positions. Their first televised debate did not record moments of adrenaline, and focused mainly on the priorities of Bulgarian foreign policy with particular attention devoted to the three main issues defining the position of Sofia in the world: the European Union, Russia and Turkey, with the latter mentioned specifically with regard to the management of migration.
The relationship with Moscow was the only subject to draw a few sparks at least symbolically. When asked “Who owns Crimea?”, Tsacheva answered by emphasizing the “invasion and serious violation from Russia”, while Radev dodged the question answering quite simply,”the fate of Crimea depends on the people of Crimea”. When accused by his adversaries of being “pro-Russian”, Radev reaffirmed his loyalty to the Euro-Atlantic axis, adding however that “being pro-European does not mean being anti-Russian”.

Besides choosing a new Head of State, next Sunday Bulgarians are voting in three referendums. These regard the introduction of a two-round electoral system, the establishment of compulsory voting (as already in force in these presidential elections) and the limiting of public financing for parties to 1 lev (50 cents euro) for each valid vote received in parliamentary elections.
The three referendum were not introduced by a political force, but by a well-known Bulgarian showman, Slavi Trifonov, the undisputed TV star from the beginning of the ‘90s and since the year 2000 star of the "Slavi Trifonov Show”, broadcast every evening on the main private “bTV” station. The program presents the daily news in satirical vein while still expressing its own position on politics and current affairs.
Taking advantage of his show, Trifonov and his team decided to launch a series of referendums with the idea of revolutionising the institutional system and (perhaps) launching into politics, using television as a springboard. Three of the original six referendums proposed were blocked by the Constitutional Court. These were probably most likely to have a potentially severe impact: to halve the number of MPs, to introduce electronic voting and direct election of regional prefects.
To date referendums, introduced in Bulgaria only a few years ago, have had very little political and institutional effect, mainly because of a low turnout. With the introduction of compulsory voting, the referendum committee hopes for bigger turnout. If the “yes” wins, Bulgaria may also see the transformation of a brilliant showman into an anti-system political leader.