“VivaBiH”: vegans in Bosnia and Herzegovina 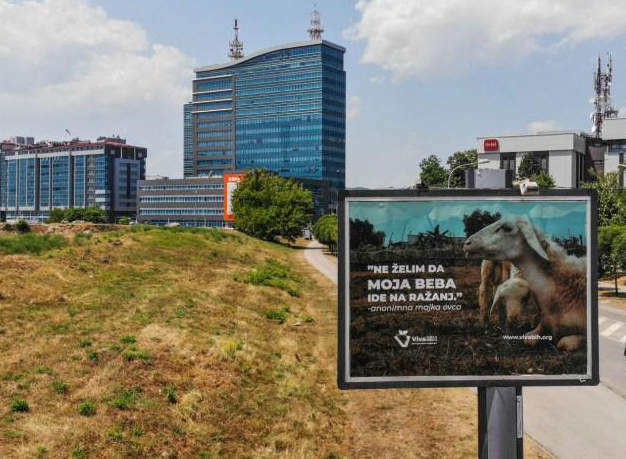 Billboard in Banjaluka "I don't want my baby to end up on the spit", signed "anonymous mother sheep"

“VivaBiH” is the first registered organisation fighting for animal rights in Bosnia and Herzegovina. Since 2016, through projects and media campaigns, it has pursued the complete abolition of systems that exploit any animal, promoting veganism. An interview

In the last few months, on the sides of the main roads of Bosnia and Herzegovina, huge advertising billboards have appeared with a lamb in the foreground next to its mother sheep, who disconsolately begs: "I don't want my baby to end up on the spit" (Ne želim da moja beba ide na ražanj), undersigned "anonymous mother sheep" (anonimna majka ovca). The campaign, promoted by "VivaBiH " in defense of animal life, has aroused quite a few controversies, especially in the religious community of the Federation which has even accused it of "Islamophobia"; we talked about this and eating habits with members of the vegan organisation.

What is "veganism" and what would be the reasons for eliminating meat from our diet? How difficult is it to be vegan in the Balkan region?

Veganism is a lifestyle that excludes, as much as possible, the exploitation of animals. The reasons for veganism are many, but the main ones are certainly to be found in ethics, the environment, health, and hunger. What we, as an organisation, strive to do is to let society see these reasons through our projects. As human beings we have become apathetic and do not think about what is served on our plate. Consciously or unconsciously, however, we make decisions every day and nutrition is one of our essential decisions: is it healthy for us and for our environment? Do we have a better choice?

Being vegan in the Balkans is definitely possible; the supply of restaurants, cafes, pubs, and shops is increasing and today we have many substitutes for meat and dairy products at affordable prices. Only this summer in Sarajevo two new exclusively vegan venues were opened, which shows that demand exists and will continue to grow over time as more and more people become aware of the consequences of using animal products.

What are the myths and perhaps the misconceptions about the vegan diet? What does "carnism" mean?

There are many misconceptions and myths about veganism. The one we most often encounter is that vegan diets lack protein, that we only eat salads, that the vegan diet is not satiating or tasty and that we are always hungry, that vegan food is expensive so most of the population cannot afford it, that it is not possible to be vegan without adding various supplements, that we are generally not healthy and that we will get sick due to the way we eat, and so on. There are so many prejudices in our society and through our work we try to dispel many of them. In addition, we strive to make people aware of the term "carnism".

Carnism is a violent belief system that manifests itself in conscious and planned violence against animals and is, unfortunately, the belief system by which most of the world's population is driven in a mostly completely unconscious way. In fact, we adopt the principles of carnism from an early age and take them for granted, without thinking about it, because we are convinced that we cannot do otherwise and it is not right. Carnism assumes that the consumption of animal products is completely normal and that some animals are simply destined for food and that this is the natural state of society. The products we eat today are prepared first, so people don't have to go through the process of getting that food. However, when people see with their own eyes the killing of animals and the way in which meat or dairy products are produced, they can no longer eat that thing because they face the brutality of the whole process. Carnism prevents you from thinking and leads you to so-called cognitive dissonance, whereby people simply refuse to accept and confront their actions. Through our initiatives we try to free our society from these chains bringing it closer to a vegan lifestyle that does not imply an unconscious guilt for our choices. 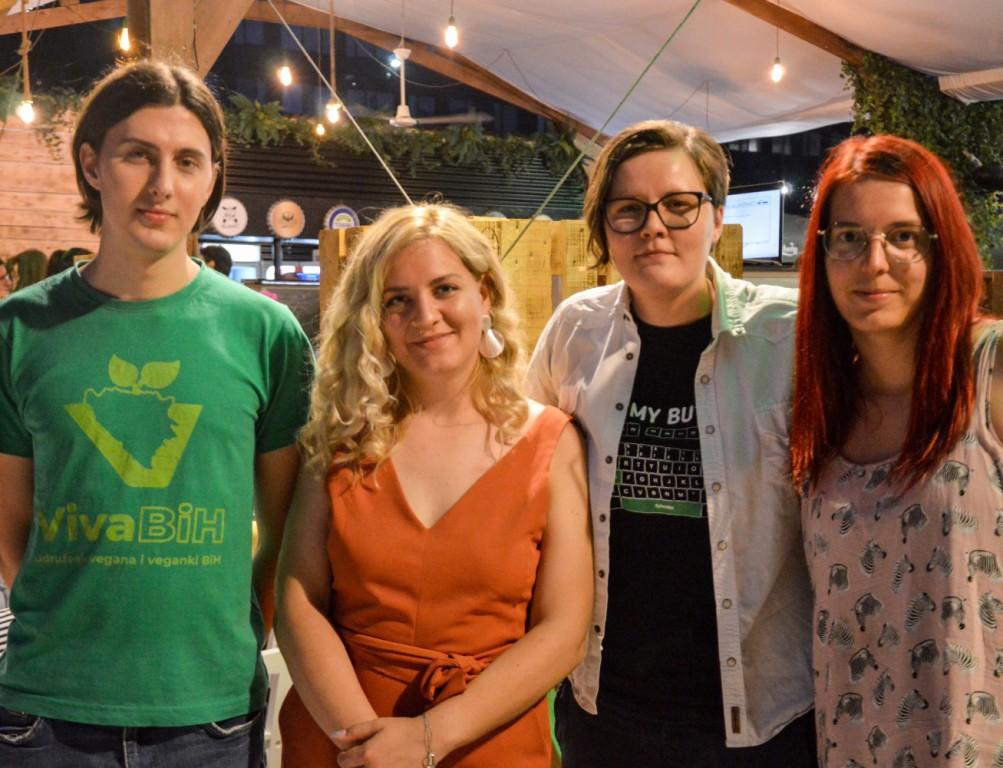 How did the idea of the “Anonimna majka”  campaign come about and what is its purpose?

Advertising campaigns similar to "Anonimna majka" have proved very important and successful, especially the one we launched against the dairy industry; we have therefore now decided to launch another one that finally makes people aware of the number of animals that are killed to end up spinning on the spit in our festivals and how much they feel pain and suffer for their offspring.

We specifically focused on the role of the mother because we believe that most of society is unaware that the lamb is indeed someone's baby and has a mother who takes care of it, from whom it is brutally turned away to be killed and end up in a banquet for us to eat and have fun. The specific campaign consists of a series of images showing the victims of human action, in particular the mothers of animals. With this initiative, which we will continue in the next period, we want to encourage people to think and show them how brutal and inhumane our treatment of animals is.

What were the reactions in public opinion? Is it true that you also received hateful messages and someone accused you of "Islamophobia"?

The "Anonimna majka" campaign was launched on 7 July throughout Bosnia and Herzegovina, long before the festival of "ʿīd al-aḍḥā" (the slaughtering festival), and it was in no way linked to this Muslim religious festival. The reactions to the campaign were varied and we received an equal number of positive and negative comments. However, negative comments are always the most read and have prevailed on social media. Particularly popular was the declaration of the imam of Sarajevo, Muhamed ef. Velic , who accused us of offending the feelings of Muslims.

However, we believe that the campaign has been unreasonably associated with this holiday. Neither on billboards, nor in any text on our site and on social networks, have we looked negatively at any religion, nor has it ever been our goal. We are very sorry to be accused of Islamophobia because we try to be very direct and we are clearly opposed to any kind of discrimination, including Islamophobia.

Can we then say that veganism is in agreement with religion, in this case Islam?

Yes, veganism is not opposed to any religion, as no religion dictates that meat must be eaten. Every religion dictates that we must protect our health, as well as the health of the Earth, therefore, bearing in mind that veganism is the best individual way to protect our health and our planet's, we can conclude that as such it is in accord with religion.

We briefly addressed the topic in a roundtable in which we discussed veganism in monotheistic religions and we also touched on the theme of animal sacrifice in the name of Islam. Islam does order a sacrifice, however, it does not necessarily mean that this sacrifice has to be an animal. Sacrifice must be a renunciation of something precious and dear or difficult to give up (vices or the like). Therefore, instead of the sacrifice of an animal, the “ʿīd al-aḍḥā” can also include a cash donation to social canteens, the sick, people in difficulty, etc.

Novak Dokovic has certainly contributed a lot to making veganism more visible in the Balkan region; is there such a character in Bosnia? What role does school and education play in all of this?

If we think of world-famous personalities, in Bosnia we don't have anyone like Novak Dokovic; however, he is also well known in our country and is a frequent guest here. Most people know that he is vegan and we consider him a very important personality especially because he dispels the prejudice that vegans cannot be athletes since they do not get enough nutrients.

Of course, we believe that school is a very important place for food education, and we think that the introduction of a healthy vegan diet is essential, especially when it comes to elementary school. It is important for children to know how to eat properly. At the moment we have not started any kind of collaboration with schools, although next year we will start with workshops where we will discuss the importance of a vegan diet. One of our partners, Danira Sabic (Danni's Little Kitchen), is curating workshops with children in kindergartens where she teaches them how to easily prepare a vegan meal; she seems to be very successful and the children are delighted. We believe it is very important to organise such projects and we hope to have even more in the future.

During the pandemic we have organised many round tables and online workshops which have proved very effective in raising awareness of veganism among people, and we always try to have a quality educational programme as well as to answer all the questions that our friends ask us. The largest projects include the research we conduct relating to the eating habits of the citizens of our country, after which we predict that the number of vegans will increase, and the institutional campaigns we are working on in collaboration with restaurants in order to introduce more food options in restaurants, cafes, and pubs. This way, we want to contribute to the development of veganism in Bosnia and Herzegovina and beyond.