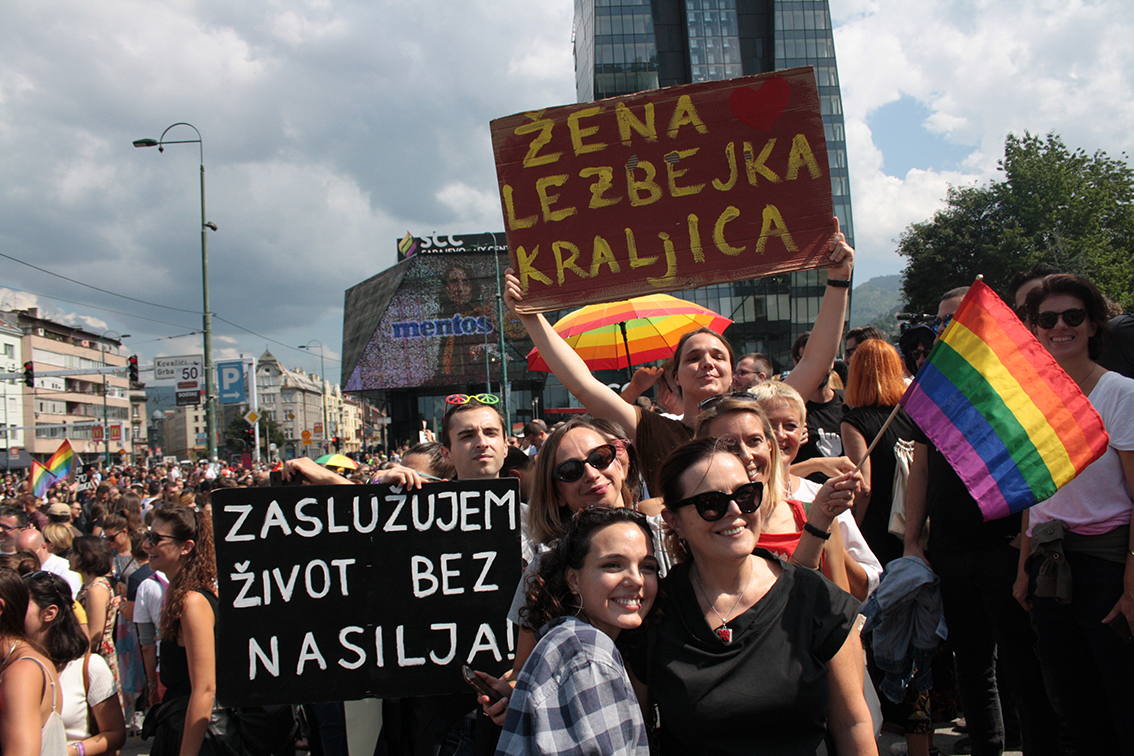 Huge participation, no accidents, visibly moved participants. And from the stage, the first Pride of Sarajevo is dedicated to all the oppressed of Bosnia and Herzegovina

Spontaneous applause, shout-outs, beating drums, smiles and hugs, tears of emotion and joy. Last Sunday, an overwhelming wave of energy, emotion, and collective revival filled the heart of Sarajevo, the stretch between the monument of the Eternal Flame and the square of the Parliament, with about 2000 people. To fully understand the scope of the event, we need to look back. "No one even dares to contemplate organising a Pride in Sarajevo or in another city in Bosnia and Herzegovina", claimed a controversial article in 2017. Still in the autumn 2018, some activists commented resignedly that it would have been very unlikely to organise one in the short term. The memories lingered of the violent attacks suffered by the lesbian, gay, bisexual, trans and intersex, queer (LGBTIQ) communities in 2008, 2016 and 2014.

In Bosnia and Herzegovina, the dogma of heterosexuality was strengthened after the wars of the 1990s and the subsequent wave of militarism, nationalism, and desecularisation. Yet, LGBTIQ associations have continued to open small spaces of protection and visibility. And they have come to demand what – wrongly – seemed to be impossible to some: the first Pride in the last country of ex-Yugoslavia and of all south-eastern Europe which had never had one, therefore “The last first Pride". It was announced five months ago, arousing threats by radical groups and the indignation of the conservative forces – of all denominations – that dominate the Bosnian public scene, and it was held last Sunday.

The day started early. The first activists arrived many hours before the scheduled start at 12, accompanied by an impressive deployment of law enforcement, with more than 1000 agents – including chosen marksmen on the upper floors – and a single point of access with tight controls. On signs and banners read some claims and universal principles: "Love is not a privilege", "Pride without prejudice", "How much is freedom?", "We are family", "He loves him", "Mom, here I am!", "Equal rights for all does not mean less rights for you!", "Sorry if my existence destroys your prejudices", "We defend refugees", "Let's ban the fascists" (implying "not us", referencing the requests to prohibit the march advanced until a few days ago).

An hour from the beginning the procession began to swell – a sign that a significant piece of the city wanted to challenge the climate of fear and indifference and re-embrace its plurality and vocation to openness, meeting the many pieces of the world that had come for the occasion. There were Belgrade's Women in Black; the LGBTIQ collectives of Serbia, Montenegro, Croatia, and Albania; representatives of different embassies including Italy's, activists who came to support the march from Germany, the United Kingdom, Italy, and of course from the whole of Bosnia and Herzegovina: Mostar, Banja Luka, Tuzla, Zenica. As soon as it was clear that the pessimisms of the eve were unfounded – whispered fears of a march limited to a few hundred regular activists – the tension dissolved.

Due to the organisers' choice, there was no amplified music. And yet the powerful song of "Ay Carmela", the legendary song of the Spanish republicans that in the post-Yugoslav countries is the popular anthem against fascism and authoritarianism, rose from the procession right away, followed by the slogan of the Sarajevo Pride, "Ima izać!" ("Time to come out!"), and "Ponos!" (Pride). At that point even the very strict security protocol of the police was loosened, an escort that sometimes seemed too intrusive (but the extreme professionalism and effectiveness in preventing accidents must be acknowledged; the organisation was impeccable). It has become clear that it is participation and civil support, and not (only) barriers and security, that create a protected, free space. The scariest moment for security was when the march passed a hundred metres from the counter-demonstration of an ultra-conservative Muslim association, present with dozens of protesters. The circumstance went unnoticed by the vast majority of participants: much more attention was paid to the many people, especially the elderly, who greeted from the windows. When the procession arrived to the square in front of the Parliament, many protesters were visibly moved.

"Today, like never before, we lesbians, gays, bisexuals, transsexuals and queers stop being invisible. Today, like never before, we will fight for our lives. We want to build a society of non-violence and community, where nobody will have to hide love and live within four walls", said Lejla Huremović, one of the organisers of the march, from the stage. The "four walls" reference is to the homophobic and transphobic narrative one can hear almost obsessively in the speeches of conservative politicians. "We are aware that this march will not change the world. But we know that it will give hope to really change things", concluded Huremović.

In a square teeming with participation, activist Branko Ćulibrk remembered those absent. "We feel great responsibility towards all those who, for fear of violence and discrimination, did not dare to be with us. Every day we fight for our existence. Every day our love and our identity are attacked, rejected, diminished”. Ćulibrk recalled the shortcomings of the country's institutions that "allow violence against us, stigmatise us, marginalise us, force us into treatment, prohibit democratic sex education. We continue to have no law on same-sex couples. Trans people are not allowed access to public health, they cannot change documents if they have not completed the transition".

In the conclusion Ćulibrk launched, once again, a transversal message: “We feel, out of responsibility and solidarity, that we have to talk about all the oppressed groups of Bosnia and Herzegovina: the Roma, people with disabilities, workers, war veterans, migrants and refugees, and all those left on the sidelines. Among them there are also LGBTIQ people, who suffer multiple discrimination. We ask for more solidarity and empathy towards all these people".

The last vibrations of the square are linked to the music of Damir Imamović, famous interpreter of sevdah, the traditional Bosnian genre. "Let each one love who they want" ("Neka ljubi ko god koga hoće"): Imamović intensely spoke these words of a very famous sevdah love song, before closing with a surprising – and very virtuous, short of a slight linguistic uncertainty – interpretation of Bella Ciao.

Reminding us that anti-fascism, here and elsewhere, is not a label or a vintage brand, but necessary awareness against the debasement of human dignity and organised violence that targets the marginalised and oppressed.

In an ideal circle, the Pride opened and closed with two hymns of European anti-fascism, the best fragments of the past century in a country that demands to live and build more freely the current century, with many spaces and much more than four walls that remain to be opened.