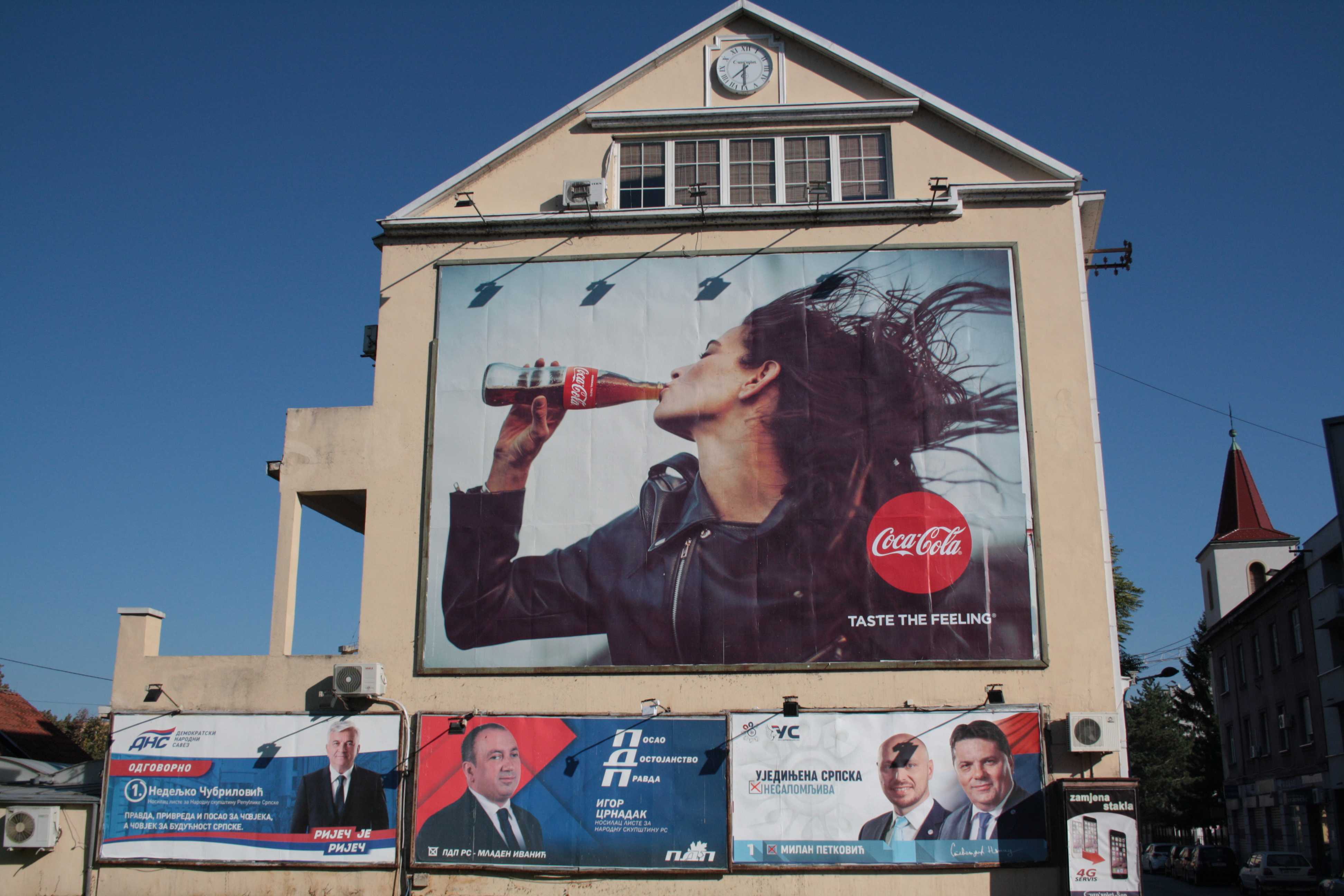 Nationalists celebrate in Sarajevo and Banja Luka, while doubts remain on a possible boycott of the state and federal institutions by Croatian nationalist party HDZ. An analysis

"They spent more money on tonight's fireworks than on the motorways built in four years". On Sunday night, this joke circulated on social networks about the SDA celebrations, just while in a Banja Luka restaurant Milorad Dodik sang folk pieces out loud together with the SNSD staff. These were the celebrations by the two great winners of the October 7th elections, the SDA (Bosnjak nationalists) and the SNSD (Serbian nationalists). In addition to the seats in the collective presidency, these two parties maintained the relative majority in the parliaments of the respective entities, with the SDA gathering about 26% in the BiH Federation and the SNSD obtaining 39% in Republika Srpska – results similar to those of four years ago. The SNSD also won the presidency of Republika Srpska, with current premier Željka Cvijanović (47%) ahead of opposition candidate Govedarica (42%).

Over 48 hours after the vote, due to the exasperating slowness of the count coordinated by the Central Electoral Commission (we are still between 80% and 90% of the process), the conclusive figures are still missing and so is, therefore, the distribution of parliamentary seats. It is fair to assume, though, that the SDA and the SNSD will team up in the government coalition at the state level, which will need at least two other forces to reach the majority. The premier, by principle of ethnic rotation, should be a Serb, therefore from the SNSD. The SDA and the SNSD will also be the core of the respective entity governments.

Between conservation and "heavy politics"

It is the victory of conservation, as these are the parties that are most firmly rooted in the institutions. It is, above all, the victory of what could be called "heavy politics", made of membership cards, social pressure, posters everywhere, identification between state and party, promises, and welfare measures – what in Bosnia and Herzegovina is generally summarised under the name of "party machinery" (partijska mašinerija). Last year, the SDA and the SNSD had 200,000 and 180,000 members respectively – the third party had 76,000 – and revenues for 2.2 and 1.1 million, at least twice their main competitors. In Bosnia and Herzegovina, 20% of inhabitants are members of a party (around 3% in Italy). Politics is still regarded as an instrument of access to wages, welfare, or contacts to obtain them. Hence the philosophy "Vote for the Devil you know", as brilliantly coined by political scientist Jessie Hronesova.

In the last week before the vote, premier of the Federation and prominent SDA exponent Fadil Novalić sent a letter to the 350,000 pensioners of the entity, bragging about the results obtained and inviting them to "remain a partner of the current government". In Republika Srpska, the government went straight for the cash, handing out a one-off bonus, between 15 and 50 Euros, to all pensioners in September – such an overt propaganda measure that Dodik did not even try to hide it: "So [the pensioners] get ready for winter, go to the ballots, and vote for us", he said in a rally amid his followers' laughter. The call to the organic nation, well summarised in simple slogans – the SDA's bright green "force of the people" and the SNSD's white-blue-red "Under the flag of Srpska" – has obviously paid off. So, these two parties have cannibalised their opponents. The SBB, the Bosnjak party of publisher Radončić, fell from 14% to 6%. The opposition of the anti-Dodik Serb parties met its seventh electoral defeat in a row, with militants, cadres, and mayors fleeing to the SNSD already in the months before the vote, especially in Eastern Srpska.

What are the results of "alternative" forces to ethnic parties? A key highlight of the elections is the victory of Željko Komšić from the Democratic Front (civic centre-left) for the Croatian seat. Komšić managed to avoid the election of Dragan Čović of the HDZ (Croatian conservative nationalists), who could have created an institutional short-circuit in agreement with his ally Dodik. The clear victory (with 53%, higher than the early preliminary data) confirms him, twelve years after his first victory in the presidential elections, as the undisputed leader of the Bosnian civic camp. However, Komšić raises concerns among some observers who see him only as a "vote against" without a new strategy, after eight years (from 2006 to 2014) without great results, with a risk of an unnecessary clash with the nationalists, who accuse him of being an "illegitimate representative of the Croats". His Democratic Front (DF), however, performed poorly in the parliamentary elections, dropping to 9% from the 14% (data only in FBiH) of four years ago.

In the field of civic parties, which ran sparse, the other important fact is undoubtedly the historic success of Naša Stranka (Our party), a liberal-socialist force that for the first time enters the state parliament (4.6%) and obtains worthy results outside Sarajevo, thanks to an innovative communication strategy aimed mainly at young people. In the canton of the capital, Naša Stranka is the second party with 13%, with peaks of 23% in the city centre. Such a result could even open the doors to the government of the canton, in the hypothesis of an ad excludendum alliance towards the SDA with the social democrats of the SDP and People and Justice (Narod i Pravda), seceded from the SDA. Another element is the revival of the SDP, which aspires to form a ruling majority in some cantons, including its former fort of Tuzla. Curiously, the SDP and the DF have actually swapped results between today and 2014 (respectively 14% and 9% against 9% and 14%), as if to show that the split between the two parties occurred in 2012 was a zero sum game, which launches yet another warning for a future reunification of the progressive forces.

Is there a future?

Now the question is whether and how the institutions will work stably. The first unknown factor is how the HDZ will behave. The Croatian nationalists had already hinted for months that, if Željko Komšić had been elected to the presidency, they would have obstructed the convocation of the various parliamentary branches. This move, in turn, would prevent the formation of federal and state governments. The HDZ could also exploit the regulatory void of the 2016 Constitutional Court's ruling on the electoral law for the High Chamber of the Federation to impose the creation of a "Croatian electoral district" guaranteeing total control over the system, applying a rigidly ethnic-territorial principle.

This ethnocratic mess risks creating a stalemate similar to that of 2010-12, when the country remained without government for 15 months. Croatia's government quickly aligned itself with Bosnian HDZ, as demonstrated by the harsh statement by Croatian prime minister Plenković ("The election of Komšić is not good for Bosnia and Herzegovina"), but also by the fact that Zagreb's delegation brought the "Komšić question" to the EU Council, raising the question of the legitimacy of his candidacy – as OBC Transeuropa was told by sources in Brussels. This attitude will certainly not facilitate regional conciliation, nor the resolution of the crisis.

The second unknown factor is how Željko Komšić himself will play his role. A few hours after the election, the Croatian-Bosnian president said that Bosnia and Herzegovina "has the right to sue Croatia at the Court of Hamburg" on the question of the Pelješac bridge, one of the most controversial issues in Bosnia-Croatia relations of the last few years. Regardless of whether Komšić may be right on the merits and in the legal bases, the timing of the declaration does not seem to help. In a moment of uncertainty when everyone uses aggressive rhetoric, Komšić's pro-Bosnian sensitivity could focus on rebuilding ties and a stable context, both in the country and in the region. The constant exhasperation of the rhetoric feeds a game of confrontation that favours only the ethnic actors, not the civic solution.

The last question mark is, of course, Milorad Dodik. In these few hours as new state president, the current leader of RS has already made all sorts of declarations: he wants to recognise the Russian annexation of Crimea; he intends to immediately see Vladimir Putin and Aleksandar Vučić; he demands to remove the officials that last August, for security reasons, denied entry into Bosnia and Herzegovina to Russian writer and former paramilitary Zahar Prilepin. Dodik's commitment to weakening state institutions from within has just begun. And no political force, for now, seems able to stop it.