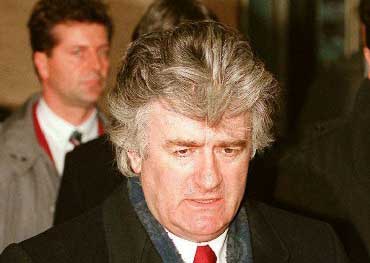 The lives of those he buried do not count. Justice does not count. Soldier Radovan Karadzic was sacrificed for the greater interest of Serbia and Europe. Now he can retire. Between the excitement and the bitterness of a sleepless night, Zlatko Dizdarevic remembers his encounters with the detainee

Just as we thought he was forgotten, people engaged with politics but not with the souls and human pain, have pulled Radovan Karadzic out of the dark and have again used him, as before, for political ends. Dragan Dabic alias Radovan Rasa Karadzic again plays an important role in the life of many.

In a hotel room in a far-away country, Jordan, the sound of the cell phone from the bedside table woke me up from deep sleep. Half asleep, I barely read the text message. It read: "CNN HAS CONFIRMED THE NEWS!"

What news, on what, who is sending it to me, what is going on? It was well after midnight, both at home and here in Asia, where I was sleeping. I turned in bed and tried to go back to sleep but it was impossible. Another message, then another, and a third one. They said that Karadzic had been arrested; that both CNN and BBC have confirmed the news; that Bosnian TV has not yet said anything and so forth.

Then, the late call. The voice of my son in Sarajevo confirming for me the same thing, with a half-joking, half-serious tone of voice ...he had the urge to laugh over some episode from our lives in the past, but the boy, well educated as he is, realized it was not the right moment for it...

Finally, I woke up deep into the night; I turned on the TV and stayed awake, surfing various foreign channels. Honestly, I don't know why. They did not tell me anything, practically anything new. Not even one new image in this avalanche or news, all known and repeated, on the war in Bosnia. None of the so-called exclusive witnesses and politicians from different parts of the world who featured said anything new. I could predict all of their comments with absolute precision.

Politics has already completely overpowered reason, emotions, and logic concerning this issue. For a long time now in the Balkans, the case of Karadzic is not a matter of crime and justice, but a matter of politics and political games. Had it been different, he would have long been where they just put him now. Nevertheless, I stayed awake all through the night until dawn, staring at the screen.

I cannot say that the fact is not important, or at least this is how it should be. Who would snatch the five million dollar reward promised by the United States for Rasa? This was the first rude thought that came to my mind that night. Rude to history, the victims, my domestic education, and the lives that Rasa, somebody's soldier, has crushed into pieces. The thought of money was only a crude, natural reflex to the news of the arrest, its timing, cause, the "surprise" and professional enthusiasm expressed by politicians all over the world. I would not object to anything in the media. We know them. For them, this is the jackpot! The content does not matter.

Politics has decided to save Private Radovan and he was saved. Everything, exactly as in the Spielberg movie, in which politics decides to save Private Ryan. It is not him who counts, but the goals. In the case of Radovan, it seems that the lives of the people he killed don't matter either. Neither does justice. The history of justice aims to serve the innocent. The famous five million dollar reward might also be sacrificed to this cause. Private Radovan had to be "saved" by some Spielberg in Brussels for the interests of Serbia, not Bosnia. This also explains the success of the operation. Private Radovan, gently nicknamed Rasa by the entire world, will safely pass the rest of his life in one of the so-called European prisons, in Scandinavia, France, or the Netherlands. In reality, a kind of private castle, with long walks in the flower gardens, and perhaps even the pool full of red fish. He will cite Matija Beckovic and Grasanin, the brilliant Russian writers, and Peter Handke, whom Rasa likes a lot. He will also proudly cite his party associates from the time when, in the Bosnian Parliament, with great zeal, he promised that the entire Bosniak people would disappear from the face of the Earth. He will write poetry for which he will receive some "international prize" from Russia or some editor from European Serbia. His faithful spouse Ljiljana will finally assure herself that "her husband is alive", as she pathetically stated at the news of the arrest. Only the pages of some reviews on wellbeing and healthy life styles, where Radovan freely wrote under a false name, would be poorer. The op-eds of Private Radovan will come to be valued more in reviews with different content. The man who "brought Serbia on the road to Europe" deserves that much.

Over the last days, the thing concerning the "surprise" arrest of Private Radovan, which stunned me, was the lack of tact, and the extent of cruelty in the "realpolitik" of the European Union's leadership. Even Belgrade displayed more wisdom and courage compared to Brussels when Serbians used words such as justice, victims, crimes, tribunal, and even genocide. In Brussels, nobody wanted, nor could hide, the significance of the Karadzic operation; but, in their view, Brussels's only interest in the affair was Serbia and its shortcut towards Europe. They want at any cost to provide proof that everything is all right there now; a very important thing for "strategic regions..." The most significant reaction related to that fact is that CNN interrupted its program to announce: "A cornerstone in Serbia's march towards Europe..."

To be honest, this awareness kept me awake completely that night when they interrupted my sleep in Amman, in the Middle East, the Asia, which is closest to us. Not because of Serbia, I wish it a good trip, but because of the brutal lack of piety for history. Again, in vain, I expected from the European gentlemen to say something about the victims, the terrible crimes, truth, and justice.

Perhaps, only in times to come, they would show how much they shiver from the political reality in the Balkans. Moreover, that reality, according to them, is the Russian military and energy presence inside Europe and on the border with NATO: all of this thanks to Serbia. The Spielbergian mission for saving the private-criminal had for many reasons a very specific timing, and it was in total harmony with the political cynicism that leaves no room for justice.

Private Radovan, as it happens often in life, is the last person with whom history should be concerned. He was not even a real soldier; neither a commander nor a strategist. The real soldier-criminal is still at large. There is a rather strange amnesia in the world of politics when it comes to General Mladic who was in charge of the crimes.

I knew Karadzic before the war. He was a sick street snatcher with the profile of a village swindler. A smalltime provincial psycho told by someone that he would play an important role in history. And, he played this role with a lot of passion. The consequences had been monstrous.

I recall an old episode today: in the run-up to the war, early one morning in the office of the weekly "Nedelja" Sunday, where I worked as editor in-chief, he waited for me with sycophant humility. He pulled out a few hypocritical compliments about the paper and my supposed "brilliant journalism he admired". Then he told me "they" wanted to propose an article. He said "he was sure that a paper and an editor so great would publish the piece, although his "colleagues" had doubted it..." I asked him who were the "they", he represented. He replied they were "a group of people with similar ideas who would perhaps form a new party, in that period of invasion of new parties, ahead of the first democratic elections in Bosnia..."

I looked at the article. It was the classical platform of a new political party. Its idea was typically nationalist, but intelligently composed and quite well written. I suggested him to express it in a form of an interview, because at that time there were numerous platforms of that type and the paper could not accommodate all the demands. He replied with a wily smile that he would like that: if his associates "would accept it" and if he talks to a "Serbian journalist". The leaders of his Greater State accepted the interview proposal. He promptly gave me an old, yellow photo from the time of his military service, and explicitly requested it went with the article. The editorial office joked about it, and this is exactly why we did it, as a joke. The photo was ridiculous and he was an arrogant clown. My deputy, a Serbian journalist, did the interview. This is when Radovan Karadzic for the first time presented his criminal-militaristic party, the Srpska demokratska stranka (SDS) Serbian Democratic Party. Representatives of the other two, already established, nationalist parties, the Croatian HDZ Hrvatska demokratska zajednica; Croatian Democratic Community, and the Muslim SDA Stranka demokratske akcije; Party for Democratic Action enthusiastically welcomed the creation of SDS. They were part of a coalition, as they are today. Izetbegovic said that the founding of SDS was a "historic day for Bosnia".

Unfortunately, it really was so. In his speech at the founding assembly of the party Karadzic vigorously attacked Sarajevo media, which according to him, were anti-Serb. He listed "Nedelja", the paper which gave him space to present his platform, among the worst in this regard.

I met him sometime later, just before the beginning of the war, at a political debate. Laughing as a brute and with his arms wide open, he told me, "I know you are angry, but you are a great editor who knows politics. I had to attack someone and it was easier to attack you, since you are more intelligent and tolerant. You don't take it badly, do you?" I shrug my shoulders as any future innocent victim, while he, maliciously smirking, went on into history.

Summing things up, I am sorry for the sleepless night when "CNN had confirmed the news". Moreover, I am sorry above all for that morning when I heard that the "arrest of Karadzic is the most important cornerstone of Serbia's walk towards Europe". I recalled the famous question of a well-known Croatian journalist to Carla del Ponte: "Do you sometimes feel sorry for the families of the indictees who are at the Hague?" And, the brilliant response of the ex-prosecutor: "I constantly feel sorry for the families of the people killed by those in the Hague."

The world is upside down. Truth does not exist any more. There are only interests to show something in one way or another. This time the truth is the following: Private Radovan has been saved. The others are dead. The Balkan evil will not be eradicated with a political gesture such as this one. Those who created Karadzic, those who protected him throughout these years, as well as those who do not give up on the project in which he took part, should not be pardoned thanks to the "realpolitik". Otherwise, everything would just return as a boomerang.