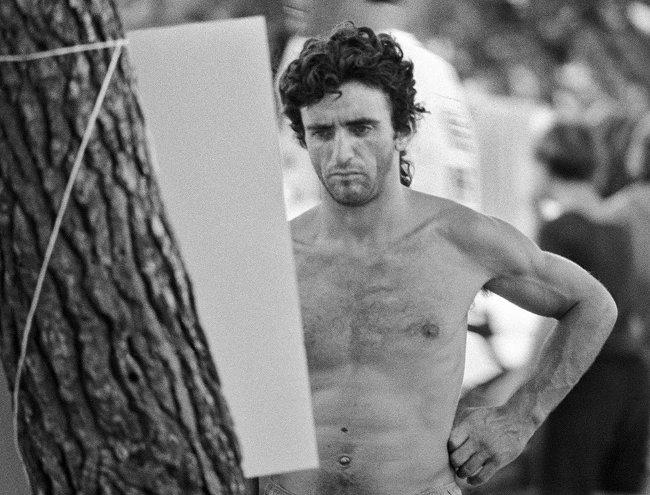 Moreno Locatelli, one of the participants to Mir Sada, August 1993. Moreno was killed a few months later by snipers in Sarajevo, where he had settled to help the population under siege (Photo © Mario Boccia)

Marching to Sarajevo to contribute to peace in Bosnia and Herzegovina and promote popular diplomacy and non-violent interposition. This was the goal of over two thousand Italian and foreign pacifists who took part in "Mir Sada - Peace Now" in August 1993. One of our journalists participated

"With all its limitations, the march for peace dealt with the violence of war everywhere, from the Balkans to the rooms of governments and international diplomacy. Because the history of mankind is always made by men, however and wherever they act". From the documentary "Mir Sada - Peace Now" (45', directed by Massimo M. Rossi - Enrico Venditti, produced by “Beati costruttori di pace”, 1993)

Twenty years ago, from August 2nd to 14th, thousands of Italians and foreign pacifists marched to Sarajevo from Split. "Mir Sada (Peace Now). There is just one peace" was organized in the footsteps of the non-violent march that in 1992 managed to get 500 Italian activists to the Bosnian capital, under siege for eight months.

The underlying principles of Mir Sada, defined in a document during the conference "There is just one peace" (held in Padova on June 26th, 1993), were modelled after those of the march of the 500: to make a tangible contribution to reaching peace and justice in Bosnia and Herzegovina and to reiterate the importance of people diplomacy and non-violent interposition in places of conflict. In addition, promoters from Italy and many other countries made specific requests to the international community and the conflict parties: immediate and definitive cessation of hostilities, disarmament of all factions under international control, and immediate implementation of all UN peace resolutions.

Promoted by “Beati Costruttori di Pace ” based in Padova and French humanitarian association "Equilibre" (responsible for coordinating logistics and medical care), the initiative gathered over 2,000 participants in Europe and beyond. 80% of them came from Italian civil society organisations, such as Acli , Associazione per la pace , Arci , Gruppo Abele, Pax Christi, and many others. Next to them were public officials, journalists, MPs and senators, including Chicco Crippa (environmentalist), Giovanni Russo Spena (Rifondazione Comunista), Dorigo Guidi (PDS), Giovanni Bersani (DC), and Alfredo Galasso (La Rete). After Italy, the most represented countries were France, with over two hundred participants, and Spain, coordinated by the "Caravana por la Paz a Sarajevo ". There were also German (under the guidance of the “Gesellschaft Kultur des Friedens ”), British, Austrian, Swedish, Dutch, Norwegian, Slovenian, Polish, Czech, Slovak, Greek, American, Canadian, Uruguayan, Mexican, and Japanese participants.

In the months before the start, the Italians, organized into "affinity groups" coordinated at regional and national level, took part in the training run by the "Centre of studies and training on the rights of the individual and of peoples" of the University of Padova. In addition to teaching them the basis of DPN (Difesa Popolare Nonviolenta /Popular Non-violent Defence), the goal was to share horizontally the initiative's principles and objectives, as well as organizational aspects. Some weeks prior to departure, a delegation of organisers established a base in Split, to continue the work of communication with conflict parties and obtain authorization for the passage of Mir Sada on the Bosnian territory.

In a large hangar near the port of Ancona, on a torrid Sunday, August 1st, 1,200 gathered to embark on the Ivan Zajc ferry to Split. Upon arrival in the morning of August 2nd, they faced the first difficulties: Croatian authorities refused the 12 coaches previously promised to make up for the missing transportation. 600 participants were forced to stay in Split.

Furthermore, calls not to proceed started raining from local military and institutional contacts as well as the blue helmets. At the Geneva conference, peace negotiations between the Croat, Serb, and Muslim parties invited to discuss the Owen-Stoltenberg peace plan – which proposed the division of Bosnia and Herzegovina into a confederation of three "mini republics" – proceeded with difficulty. After several ceasefires, the conflict had intensified throughout the country, and NATO declared its readiness to bomb the Serbian forces besieging Sarajevo if they did not retreat.

The pacifists spent these days of waiting between meetings and assemblies, to follow developments and discuss whether to continue. In the afternoons and evenings, they organised torchlight processions and meetings in Split with the local population. Finally, in the morning of August 4th, over 800 depart in the direction of Sarajevo – through Duvno / Tomislavgrad – to arrive in the early hours of August 5th to Ramsko Lake, near the town of Prozor, 120 km from the Bosnian capital. Here they camped after one vehicle was seized by the Bosnian-Croat paramilitary.

In the meantime, the pacifists that had remained in Split, along with 500 other newly arrived with a second ferry, organised group meetings, discussed the meaning of the initiative, and followed developments from the places of conflict. At the Ramsko camp, people awaited the return of a delegation that had left for Sarajevo to get a temporary truce between the contenders and guarantees for the safety of the path.

In the afternoon, while on the other side of the lake the HVO artillery (the Bosnian Croat army) targeted the town of Gornji Vakuf – inhabited mainly by Muslims – and helicopters kept landing with Bosnian-Croat wounded, the delegation returned with negative news. As shown in the documentary by “Beati Costruttori di Pace”, the head of mission, Pierre Laurent of Equilibre, reported: "The military representatives we met ordered us to leave immediately and said that if it were possible to negotiate between Croats and Muslims they would already have achieved peace".

The intensification of clashes between Croats and Muslims, news of upcoming international bombings, and threats from Bosnian Serbs caused Equilibre to withdraw. As president Alain Michelle stated on August 6th, in a meeting on the shores of the lake: "Equilibre dissociates itself from the initiative. For the unacceptable conditions, beyond the limits of safety, and the certainty of imprisonment and martyrdom faced by those continuing". While the French returned to Split, another group of Italian, Spanish, and German pacifists arrived at Lake Ramsko a few hours later.

The day after there was a radio call with Umberto Playa, head of the Crisis Unit of the Ministry of Foreign Affairs, which confirmed the seriousness of the situation: "I would like to invite you to think and to withdraw from something that is becoming more dangerous by the hour for all of you. And to do it between now and Monday morning (note: August 9th), as in the afternoon NATO will probably decide to do a bombing..." Don Albino Bizzotto, president of “Beati Costruttori di Pace”, accepted the invitation: "At this time, it will be objectively impossible to pass safely without the sacrifice of any of us". In the meeting, the majority decided to withdraw and wrote a document, then handed over to the British peacekeepers stationed in the area, which called for the international community to take responsibility for the consequences of its inaction and initiate immediate action for peace.

A bus with 58 people, each taking individual responsibility, decided to continue from Ramsko to Sarajevo. The others returned to the base camp of Split in the afternoon. Together with those who had remained there since August 2nd, they decided to continue the initiative, but marching to the divided city of Mostar, the east part of which was being besieged and bombed by the Croatian-Bosnian military that controlled the west. The goal was to bring the Croatian and Muslim parties to the ceasefire, make a peace march, and bring humanitarian aid to civilians on both sides. One group, with Tom Benetollo and Raffaella Bolini (Arci) and on behalf of the Italian Consortium of Solidarity, went instead to the Posušje refugee camp, located in Bosnia and Herzegovina, a few kilometres from the border with Croatia, with the aim of assessing the needs of civilians that had been placed there.

In the afternoon of August 9th, the column was blocked near Široki Brijeg, a few kilometres from Mostar. The command of the HVO checkpoint, which controlled the area, denied permission to enter the town and demanded to immediately abandon the street, the main corridor for the military. After long negotiations, permission was only granted to ten coaches, for a total of 500 activists, and the ambulance van with the radio station. The others had to give up. The 50 arrived in the square outside the cathedral, in the west of Mostar, and there remained for two hours.

Luigi Bettazzi (Bishop of Ivrea), Tom Benetollo (Arci), and Mario Montagnani (on behalf of the community of non-believers) gave speeches in front of the cathedral. Bishop Ratko Perić of Mostar, present near the square, did not intervene in public and only answered questions from journalists. There was no meeting with the Muslim and permission was not given to reach the Neretva River and the eastern part of the city. The proposed cease-fire was not respected. All around the square, Croatian-Bosnian soldiers mixed with local citizens, while Croatian bombs fell a few tens of meters away.

On August 10th, most participants returned to Italy. On the 11th the news came that the 58 had managed to arrive in Sarajevo, except a few who were obliged to remain in Kiseljak, at the gates of the capital, the area under Bosnian Croat control. On that evening, those still in Split organised a demonstration-concert in Republic Square, involving local citizens, including women, the elderly, and children.

The return saw participants divided between those who believed the initiative had had a positive effect and those who thought much better could have been expected. From the organizational point of view, for example, the decision making process by organizers, but also the definition of the political meaning of the initiative, had not always been shared. One thing is certain: Mir Sada contributed to the creation of networks that would produce a massive movement of solidarity with the former Yugoslavia in Italy.

Even today, we do not know the size of that multi-faceted movement. According to some estimates, over 20,000 volunteers (including individuals, groups, associations, and public and private bodies) continued to help and cooperate with the peoples of the former Yugoslavia during and after the wars in the Balkans – thus transforming, in the words by Alexander Langer , pacifist, non-violent theory, into "concrete pacifism”.